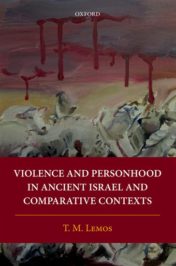 Violence and Personhood in Ancient Israel and Comparative Contexts

After the violence in Charlottesville, Virginia on 12 August, 2017, the people of the United States waited anxiously for a response from their president. Sure enough, the first response came that day, denunciatory but equivocal. He condemned the violence coming from “many sides,” a response many found dissatisfactory considering that it was not counterprotesters but the alt-right who were responsible for the death of thirty-two-year old Heather Heyer. And so, two days later, following widespread discontent with his first tepid foray, the president tried again, this time actually mentioning the people responsible—neo-Nazis and white supremacists. But the next day he once more changed course, doubling down on his initial reluctance to focus his condemnations solely on right-wing extremists. Among the torch-wielding alt-right protesters in Charlottesville were “very fine people,” he insisted.

Why was Trump so ambivalent in condemning what even many of his fellow Republicans easily denounced? There are likely many factors at play, but one that has gone mostly unrecognized is the importance of domination to Trump’s worldview and seemingly that of his supporters. In many regions in the ancient world, personhood was based on violence, physical dominance, and control over the bodies of inferiors. What do I mean by “personhood”? I define personhood as a recognition of an individual’s value that is conveyed by a community and accords to those recognized as persons rights such as protection from harm, as well as the ability to seek redress if one is harmed.

Most of us in contemporary North America think of personhood as something static—once a person, always a person—but in reality personhood can be nullified. This was very much the case in ancient Israel and Mesopotamia, where even the personhood of free males could be erased through violence, particularly if they threatened the dominance of a more powerful male. Personhood can be erased in our society, too. There a few contemporary cases from American society where this type of malleable, violence-based personhood is also present; these include the torture of enemy combatants at Abu Ghraib and police shootings of African-Americans.

Trump’s rhetoric shares a surprising amount in common with the rhetoric of ancient Near Eastern kings. Mesopotamian kings regularly described with great bombast their incomparability, magnificence, and mercilessness in trampling those who would dare attempt to rival them. One king wrote of himself: “I, Ashurnasirpal, strong king, king of the universe, unrivalled king…the king who subdues those insubordinate to him,” while also boasting of his strength and virility in language very much typical of Mesopotamian royal inscriptions (see A. Kirk Grayson, Assyrian Rulers of the Early First Millennium BC [1114-859 BC], 2:194). Reliefs portray these kings as towering over vanquished enemies who appear minuscule, feeble, and feminized.

Like Assyrian monarchs who declared themselves to be “without rival,” Trump repeatedly points to his greatness. No one is more dominant, more impressive, more great than he is. Even his hands are “the most beautiful”; his virility, he guarantees us, is impressive. When any aspect of Trump’s purported greatness is challenged, his response is extremely aggressive and sometimes includes animalizing and/or violent language. For example, he has referred to women who challenged him as “pigs,” “dogs,” and “animals.” When he was confronted by a disabled reporter, his response was to humiliate the man publicly. He sometimes encouraged violence at his rallies and has publicly expressed support for torturing and killing not only terrorists (“animals”) but the families of terrorists. As we saw post-Charlottesville, he is uncomfortable denouncing violence unless he can in some way blame his opponents for it. This seems to be how he attempts to maintain a position of power despite having to denounce publicly the very type of social and physical dominance he clearly treasures and wishes to afford himself.

In the eyes of Mesopotamian kings, those who dared question their magnificence were unworthy of humanity—they were not just called animals, but slaughtered, mutilated, and displayed like animals. Only socially dominant males had the right to bodily integrity. Women’s bodies, slaves’ bodies, and perhaps especially rival kings’ bodies had to be publicly subordinated in order for dominant men to remain powerful and in control. While Trump has not had anyone decapitated, his rhetoric does seem to betray the same competitive view of social status—someone is either dominant or subordinate, and a man must fend off challenges to his dominance in forceful ways because of what subordination entails, which is humiliation, physical assaults, dehumanization, and even death. The infamous Access Hollywood bus tape demonstrates well that Trump sees women as subordinates whose bodies he, as a dominant male, may manipulate at will. But it is not just women Trump sees as subordinate and subject to humiliation and abuse. It is anyone, really—any rival, political, professional, social, or cultural. His reprobations fly on Twitter with a frequency that would astonish even Nebuchadnezzar. And Trump’s children have, it appears, learned well the ways of their father. Speaking of his father’s critics, Eric Trump stated: “To me, they’re not even people.”

More troubling, however, than the rhetoric of Trump or his son is Trump’s popularity. Many of his supporters apparently esteem him not despite his domination rhetoric but precisely because of it. This appears to indicate a shifting trend concerning views of personhood in American society. In the past hundred years, there had been a move toward ever more inclusive views of personhood. Children, women, racialized minorities, and animals have all seen expanded rights. However, the election of Trump and the related rise in hate groups, hate crimes, hate speech, and xenophobia seem to evince a backsliding toward a domination personhood centered in masculinity, racism, and not least of all violence.

If this assessment is correct, Charlottesville may well be just the beginning. After all, we have seen what happens when a society withdraws the protections of personhood, when being human is not enough to warrant basic rights. Racism, bigotry, white supremacy, Nazism—this rejection of broad attributions of personhood goes by various names. The resurgence of domination personhood should terrify all of us, perhaps even more than the marching of neo-Nazis or hooded Klansmen. After all, their newfound shamelessness would be impossible without it, and its influence is apparent not just on the margins of American society, but at its very core—with the presidency of Donald Trump himself.

T. M. Lemos is Associate Professor of Hebrew Bible at Huron University College, University of Western Ontario. She received her A. B. in Judaic Studies from Brown University and her Ph.D. with distinction from Yale University in Religious Studies. Her publications include Marriage Gifts and Social Change in Ancient Palestine: 1200 BCE to 200 CE (Cambridge University Press, 2010). She is the author of Violence and Personhood in Ancient Israel and Comparative Contexts.