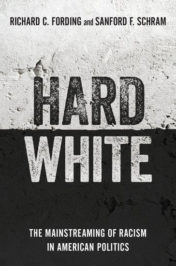 Hard White: The Mainstreaming of Racism in American Politics

The mob that ransacked the Capitol at President Donald Trump’s behest on January 6th brought together various sorts of extremists deeply committed to sustaining Trump’s presidency by any means possible, including violence if necessary. Yet, in addition to their loyalty to Donald Trump, many of these extremists were also united by an ideology of white nationalism, driven by a strong sense of white racial identity and hostility toward racial outgroups. This fact was clear from the many white nationalist symbols on display at the protests. And as more information has been released concerning the identity of the participants in the insurrection, we have come to learn that members of several organizations tied to the white nationalist movement were present at the protests. This is not surprising—the insurrection was at its base founded on a racist lie that nonwhites, African Americans in particular, in big cities, in key swing states, not the violent rioters, were the ones who were undermining the rule of law by committing massive voter fraud to hand Biden the election.

This “big lie” of the “stop the steal” campaign and its role in the Capitol riot provides perhaps the most alarming evidence yet of how the racism of a burgeoning white nationalist movement has been “mainstreamed” in contemporary politics. Our research in many ways suggests that the events of January 6th were years in the making. The evidence shows how Trump as a political novice came to power by adopting the white nationalist movement as his ready-made base of support. The white nationalist movement had no doubt been around for years, if only lingering on the fringe of mainstream politics, but it intensified in reaction to the presidency of Barack Obama when the Tea Party led the way to inflame racists to increase their involvement in conventional electoral politics in reaction to the first nonwhite president in US history. This was a definite inflection point in this mainstreaming. Yet, Trump took this mainstreaming of racism to another level with his initial run for office right through to the end of his presidency and in the process has become the de facto leader of the white nationalist movement in the United States that has reached its apotheosis in the seditious insurrection of January 6th.

While playing with the fire of racial extremism is a very risky business for politicians, people like Senators Ted Cruz and Josh Hawley do not seem chastened by the fallout of the Capitol riot and still look to assume leadership of the Trump coalition and its white nationalist base. For now, we can say it is a sign that American politics has changed. For decades, playing the race card has been a way for politicians in both parties, but especially for Republicans, to rise in prominence. But now, more than ever, racial attitudes have come to define partisan identities, and partisan polarization has become more racialized than ever. Republicans all around the country must without reservation seek to at least placate their racist base if they are to gain office. While Trump is being removed from the political scene, Trumpism’s incendiary racist politics is likely to persist for some time to come, at least until it is thoroughly repudiated at the ballot box.

Part of the problem of Trumpism is that its racist appeals are broader than what politicians most often used in the past. Our research had begun with an examination of racial attitudes in contemporary politics and the growth in what we call “white racial extremism,” which we argue is no longer simply about white attitudes towards black people. Over the last four presidential elections, the most politically potent racial attitudes have been those directed toward a constellation of groups, most especially African Americans, Latinx immigrants, and Muslims. These attitudes have become increasingly intertwined, especially since the election of Barack Obama in 2008, comprising the basis of what we call white “outgroup hostility.”

To better understand this mainstreaming of racism in electoral politics, we identified people we define as “white racial extremists.” These are not simply people who feel some level of resentment toward these groups—although to be identified as a racial extremist in our data, one must display a greater than average level of hostility toward all three racial groups. The most important condition for satisfying our definition of “white racial extremist” is that the respondent must display the absolute highest level of hostility allowed by the survey items toward at least one of the groups. Identifying racial extremists in this way thus allows for us to study their political behavior over time as measured in repeated surveys.

By the time that Trump announced his candidacy in 2015, white nationalists had already gotten a taste of electoral success through the Tea Party. However, the movement lacked a charismatic national leader who could unite the white nationalist movement while at the same time being electable to a broader group of voters. Trump, it turns out, was exactly who they were waiting for, and from the very beginning it seemed that he knew this. Throughout the campaign there was a long list of incidents in which Trump seemed to offer a nod to white nationalists, much like he did in the first presidential debate when he blew his dog-whistle and directed the Proud Boys to “stand back and stand by.” Our research also finds that in his campaign speeches, Trump was far more likely to call out African Americans, Latinx immigrants, and Muslims compared to his primary competitors and he was far more likely to do so using terms that reflect negative stereotypes and tap into white outgroup hostility.

Our research relies on a variety of data sources to show that white racial extremists responded with great enthusiasm to Trump’s candidacy. Most importantly, compared to previous elections, racial extremists were significantly more likely to turn out for Trump in the critical swing states that carried him to victory. Racial extremists were also more likely to have participated in the campaign in other important ways, such as attending campaign rallies and working for the campaign. Finally, our research shows that as a result of Trump’s election, racial extremists experienced a significant increase in political efficacy—the sense that the federal government is responsive to your concerns. This development is especially noteworthy because in the past few decades, people with high, overt levels of racial prejudice have displayed low levels of political efficacy and for this reason have been more likely to sit out of politics altogether, compared to other voters. This has changed with Trump. After the election, racial extremists had closed the efficacy gap with non-racial extremists and by all accounts continued to actively participate in Trump’s re-election efforts.