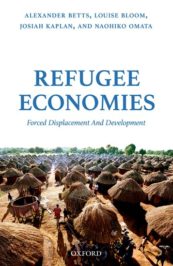 We Celebrate the United Nations’ World Refugee Day every year on 20 June. It is a day to recognize and honour refugees’ resilience, agency, and capability. In the area of refugees’ economic lives, there is growing evidence demonstrating that refugees are economic actors who are able to sustain themselves and to make socio-economic contributions to their hosting society.

Indeed, refugees are ingenious economic players, in principle. However, now we should go one step further to nurture more nuanced understanding of refugees’ economic lives and the economic disparities between them.
Refugees are not different from anyone else as human beings. In any community or population, different people suffer, survive or prosper in diverse ways, adapting to the environment in which they find themselves. Personal characteristics, such as business background, education, language skills and social networks, can have an effect on people’s livelihoods. Research on refugees’ economic lives therefore needs to understand and explain why such diversity exists in their economic consequences.

Currently, the Refugee Studies Centre at University of Oxford is undertaking a study on refugees’ economic activities with South Sudanese, Somali, and Congolese refugees in Kenya, using Kakuma camp and Nairobi as primary sites. Although the research is still in progress, our preliminary observations indicate interesting variation in their economic outcomes.

The findings demonstrate the importance of these surrounding contexts for refugees’ economic outcomes. Regardless of nationality, the income level of refugees in Nairobi appears to be much higher than that in Kakuma camp. Nairobi’s urban refugees need to meet their necessities on their own because they have little to no access to humanitarian aid – unlike camp-based refugees who receive free food ration and don’t have to pay rent. However, those in Nairobi enjoy access to increased opportunities for income-generation and education, as well as amenities such as better transportation and internet. Better access to these socio-economic infrastructures enables refugees to build more lucrative livelihoods than those refugees living in the camp.

The specific characteristics and capacities of households and communities also matter, of course. Even within the same geographical context, there is significant variation in household income levels across nationality groups. Regardless of their location, Somali refugees usually earn more income than Congolese and South Sudanese refugees. These differences are largely explained by the presence of social and cultural assets of Somali communities. Utilizing their clan-based connections and transnational networks, Somali refugees tend to have better access to employment opportunities from Somali Kenyans and the remittance transfer systems. Detailed analysis of data in Kenya will be available later this year.

For recent years, promotion of ‘self-reliance’ for refugees has become a pressing agenda in the international refugee regime. The United Nations High Commissioner for Refugees broadly defines self-reliance as ‘the social and economic ability of an individual, a household or a community to meet essential needs in a sustainable manner’. This concept has been universally embraced by policy-makers and aid agencies and has now become an increasingly visible part in refugee assistance and protection programmes worldwide.

However, many of the past attempts to promote self-reliance have met with limited success. At least one possible reason is a universal lack of systematic understanding of the differences in refugees’ economic capacities.
There are now more than 21 million refugees worldwide. It is not realistic to assume that all of world’s refugees can fully exercise their capacity and attain self-reliance; in all societies, there are people who can be self-reliant but there are also those who struggle to make ends meet.

With a better understanding of the mechanisms that differentiate the economic consequences for refugees under various contexts, aid agencies could design and implement effective interventions that would nurture the skills and talents of refugee communities, while providing target assistance for those with limited economic capabilities and resources.

Currently, the world faces the largest refugee crisis since World War II. It is undeniable that we need to pioneer new ways to support and enable refugees’ socio-economic independence in the long-term. Recognizing and understanding differences in economic outcomes for diverse groups of refugees can offer an opportunity to radically re-think refugee assistance.

Naohiko Omata is Senior Research Officer at the Refugee Studies Centre at the University of Oxford. He is one of the co-authors of Refugee Economies: Forced Displacement and Development.