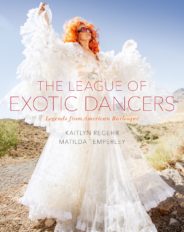 On a sticky afternoon in June of 2015 I, with friend and photographer, Matilda Temperley, drove through downtown Las Vegas and into the driveway of the El Cortez Hotel and Casino. The midday sun exposed some rust on the hotel’s neon signage as well as a missing light bulb on the giant red, rotating high healed shoe, which framed an advertisement for $10.95 Prime Rib at the hotel’s diner.

Downtown Las Vegas, situated about five miles from the tourist-driven spectacle of the Las Vegas Strip, had for about a half-century remained the forgotten Vegas of the 1950s. Now many of these iconic downtown sites–the Neon Sign Grave Yard, the decrepit old casinos, and the streets that Frank Sinatra loved and then left–have been embraced by hipster rejuvenation. Downtown Las Vegas, like so many once down and out, now hipster-ed, American neighborhoods, currently enjoys craft beer, carefully-curated cocktail menus, and is likely the only place one can purchase kale in all of Nevada. At the top of the main drag, seemingly unaffected by the neighborhood’s various incarnations sits the El Cortez. Opening in 1941, the El Cortez bills itself as “the longest continuously-running hotel and casino in Vegas,” and it attributes its longevity to “that classic Vegas vibe you just can’t get anywhere else.”

Matilda and I had been travelling to Las Vegas to work on our book over the past five years. In that time, we’ve spent nights on and off the strip, in over a dozen hotels, but never had I really stayed in Las Vegas until staying at the El Cortez. It is a place where one can feel lost (or in our case, locked) in time. But the El Cortez– much like the Burlesque Hall of Fame, which we were documenting during our time there–also continues to live, a good half century past it’s supposed prime.

As we walked into hotel’s lobby, we were greeted by Director of Guest Relations, Katie Epstein, and Executive Manager, Alex Epstein. Casino born and bred sisters, who are second generation to the establishment. Though one might think Alex and Katie, two well-dressed and accessorized twenty-somethings, would be more aligned with the changes in the rest of the neighborhood (luring in a younger, ever hipper crowds) they have a dedication to what the family business.

The sisters walked us over the bold floral patterned carpet, past the endless ring of slots, the glow of the video poker machines and around the entirety of the casino floor. As they did this, I stopped and asked patrons if they would mind if Matilda photographed them. In doing so, I would often pause and talk to them for a while. I was surprised to note that unlike the vacationer hotspots on the strip, almost everyone I spoke with was a regular and I was struck by the concept that someone’s primary leisure time, and presumably disposable income, could be spent here. “The Colonel,” a retired marine, sits with men from his former regiment, with whom he plays Kino, four times a week. One woman, Judy Perlberg, who emigrated to Las Vegas from Israel in the 1970s, has played the slots at the El Cortez twice a week for the past thirty years. She mentioned Jackie Gaughan, who took over the hotel in 1963 and lived in the upstairs suite until his death in 2014.

Each door to Jackie’s suite had oversized gold handles forming Jackie’s initials. And, at sisters’ suggestion, we soon found ourselves prying open the large “J” and “G” to reveal the incredible time capsule. The carpets, the wallpaper, and the champagne flute shaped light fixtures were all in the same hue of, now faded, powder pink. The bathtub, bidet and toilet were entirely pink marble, and the mirrors had cut outs of bubbles and champagne coupes. The bar was gold and looked as if it had been pulled off a sound stage of a Sean Connery-era Bond film, and the three balconies on each side of the flat collectively gave a view of the entirety of the city. I also noted that there were too many doors in the suite, although I didn’t give considerable attention to this until the following afternoon.

Matilda requested permission to shoot Jackie’s suite the next day. This would be the first time a camera had seen the inside of it in decades. She also asked if we could take a model in with us in order to bring some life back to the uninhabited and empty apartment.  When we returned, we moved towards the elevator through the smoky casino floor, a stark contrast to the maximalist decor of the penthouse some 16 floors above. Alex joined us again as did vintage pin-up model, Lou Lou D’vil.

Matilda, Alex and I sat on the faded pink carpets of the suite’s main room and waited while Lou Lou changed. She walked out in gold lingerie holding a black sequined gown, asking what type of costume we were looking for. At which point the door behind her slammed shut locking her clothing in one section of the flat, and us in the main party room, with no access out.

Alex grabbed for her phone and proceeded to call various members of El Cortez management, only to find that no one had access to the internal doors, nor did they know that they even existed. And so, we all sat on the floor of the empty, bubble gum apartment awaiting a locksmith to free us. The vintage underwear-clad Lou Lou stated that the multiple doors were likely to enable mob activities during busy parties. Though my initial reaction was to dismiss this as Vegas folklore, Alex did not deny Lou Lou’s suggestion.

When freedom finally arrived, in the form of a serviceman–who seemed suitably surprised to find this strange assortment of women on the floor of an abandoned penthouse suite–Matilda took a few snaps of Lou Lou. And as dusk rolled in, and with it, more favorable lighting for both the hotel’s neon façade and the patrons within it, Matilda and I set off for another round of photographing and speaking with people at the casino.

Cameras are typically forbidden on the casino floors of Las Vegas, as people often wish to remain anonymous while gambling. However, similar to the day before, most of the patrons wanted to speak about the El Cortez as if it were their private club, of which they were very proud to belong. We spoke with a couple who had spent every wedding anniversary at the El Cortez since 1968. We talked to the security guards who stand by the advertisement for the prime rib special every evening because when people enter a casino “they’re somebody, and as they leave they are somebody else”. And, as we turned down yet another row of slot machines, one woman, a diamond member (awarded for the regularity with which she played the slots), reached out a tired and weathered hand for Alex and said: “thank you”. To this, Alex replied, “here is my number. If you ever want to talk or anything…, I’m here.”

The El Cortez sits as a parallel story to Las Vegas as a whole. It is the juxtaposition of the Colonel playing Kino or Judy Perlberg slipping her week’s wages into the slot machines, to the grandeur of Jackie’s suite perched just floors above. It is the locking doors facilitating mob activities, looking down the security guards on the street  below. But it is also Alex Epstein giving her number to a weary El Cortez regular. Las Vegas is a city which pushes many of the nation’s most contested issues into the foreground and to the extreme–wealth inequality, addiction, crime, sex work. Our book, The League of Exotic Dancers, and the El Cortez are just small microcosms exemplifying such extremes, but they are good examples. If you are visiting Sin City, go to downtown Las Vegas, drink a craft beer on Fremont Street, and walk through the casino floor of the El Cortez. Ask for Alex, see if she’ll let you see Jackie’s flat, and most of all, meet the people who live and continue to gamble there. For whether you see the El Cortez casino as forlorn rows of depletion, exploitation and addiction or serving a social function, as a communal club, a place for people to go, you will have seen Vegas for what it is, the lived in Las Vegas, and you can decide for yourself.

The images included in this post were shot by Matilda Temperley, produced by Claire Wigglesworth and originally published in Vegas Rated in March of 2016. Not to be re-used without permission.

Dr. Kaitlyn Regehr is an ethnographer and documentarian. Her work has appeared internationally in academic and popular print outlets including the BBC, Variety Magazine, and the Los Angeles Times. In addition to serving as a topic specialist for BBC World, Regehr has created documentary content for networks such as Super Channel (CA), SWR (DE) and ARTE (FR).

Matilda Temperley works as both a fashion photographer and a photojournalist. Her personal work is inspired by marginalized societies. In September 2015, Matilda won the Royal Photographic Society's Vic Odden award for her bestselling book, Under The Surface - Somerset Floods. In September 2016 the RPS and The Guardian awarded Matilda the Joan Wakelin Bursary to document leprosy treatment in Ghana. At times confrontational, Matilda's portrait work is an empathetic nod to the self-expression of her subjects. She has also been a finalist for the prestigious SONY World Photo Awards for her work in Africa.