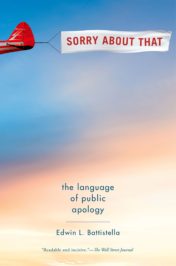 A colleague of mine recently retired from teaching. As she began her last semester, she announced to her students that she hoped they would finally be the class where no one confused “its” and “it’s.” Her wish did not come true.

The apostrophe rules of English are built to confuse us. Not intentionally. But they have evolved in a way that can confuse even the most observant readers and writers.

How did that happen? Apostrophes made their way into English in the early 16th century, first to indicate an omitted letter or letters. The printed editions of Shakespeare’s plays, for example, use apostrophes to show words contracted such as ’tis, ’twill, and ’twas, and pronunciations such as ’cause, strok’st, and o’er. They were even used to shorten articles and possessives as in th’imperial jointress or by’r lady.

The printed plays also show the apostrophe used to indicate the possessive, as in A Midsummer Night’s Dream. But sometimes the apostrophe could indicate a simple plural. When Camillo in the Winter’s Tale refuses to assassinate the King of Bohemia, the text reads:

“If I could find example of thousand’s that had struck anointed Kings And flourish’d after I’ld not do’t.”

And the play Love’s Labor’s Lost was variously printed with no apostrophes, just one apostrophe (indicating a contraction of “labor” and “is”), or with pair of apostrophes. In the late sixteenth and early seventeenth centuries, the editorial conventions were pretty clearly in flux. Over time, the function of the apostrophe has become somewhat more codified, but there is still plenty of flux.

The apostrophe rules of English are built to confuse us. Not intentionally. But they have evolved in a way that can confuse even the most observant readers and writers.

Willard Strunk and E. B White’s Elements of Style begin their discussion of rules of usage with the dictum: “Form the possessive singular of nouns by adding ‘s.” Sounds simple enough, but it’s a rule with plenty of exceptions. Strunk and White mention some, such as the possessive of ancient proper names ending in –es and –is, and the possessive Jesus‘. They go on to call out the “common error” of writing “it’s” for “its” and “its” for “it’s,” giving the mnemonic device: “It’s a wise dog that scratches its own fleas.”

Of course, English also continues to use the apostrophe for common contractions of words like: will, am, have, are, is, and more, yielding the apostrophized forms: I’ll, I’m, I’ve, you’re, she’s, let’s, they’re, there’re, won’t, ain’t, who’s, and it’s. So it’s and its, who’s and whose, and they’re, their, and there are homophones. It’s an easy pattern to mislearn.

To make matters even worse, institutionalized spellings often remove apostrophes for possessives, like the United States government’s spelling of Pikes Peak, Hells Canyon, Harpers Ferry, Toms River, and Grants Pass. Presidents Day is anyone’s guess and the Veterans’ Administration seems to have solved the problem by renaming itself the Department of Veterans Affairs.

So what’s a writer to do? If you learn all the rules and exceptions, manage to remember them in the heat of prose, and can thread your way among various editorial practices, you are probably okay. That’s a lot of work. Many of us learn our apostrophes by inferring patterns from what we read. If so, textual evidence almost certainly leads to confusion.

It’s little wonder that the apostrophes have had their detractors. George Bernard Shaw called them “uncouth bacilli.” They certainly seem to have evolved to trouble us.