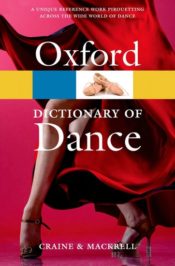 The second edition of this dictionary is a unique single volume reference on all aspects of dance performance. It covers all aspects of the diverse dance world, and includes detailed entries on technical terms, steps, styles, works, and countries, in addition to individual biographies.

There is an amazing variety of types, styles, and genres of dancing – from street to disco, to folk dancing and ballroom. Some are recent inventions, stemming from social and political changes, whilst others have origins as old as civilisation itself. Archaeological evidence for early dancing has been found in 9000 year old Indian cave paintings, as well as Egyptian tombs with dancing figures decorating the walls, dated to around 3300 BC. Society’s love of dance has never waned, and it is just as popular now as ever. With the rise of dancing television shows, official competitions, and public events around the world, we thought we’d take a look at some of the most widespread types of dance and how they started.

Do you know your Jive from your Jazz, your Salsa from your Samba? Read on to discover the surprisingly controversial origins of the Waltz, and the dark history of the American Tango.

The Charleston was especially popular in 1920s America, as a fast-paced and strongly syncopated dance (i.e. emphasizing unstressed musical beats with the steps and movements). Its name derived from Charleston in South Carolina, and although it is usually danced by two or more people, was originally a solo dance performed by African-Americans. The Charleston was accepted as a ballroom dance in 1926, with Josephine Baker being one of its most celebrated performers.

Like the Charleston, the Foxtrot is another popular ballroom dance of American origin. It is danced to a march-like ragtime (which can be either slow or fast, with alternating slow and quick steps). This is a type of music usually played on the piano, evolved by African-American musicians in the 1890s. Similarly to the Charleston, this music also features syncopated melodies, with accented accompaniments. From around 1913 onwards, the Foxtrot was widely danced around the world.

The Lindyhop is another dance of American origin, performed by couples to Swing music. It first appeared at Harlem’s Savoy Ballroom in the 1920s, where black dancers embellished the choppy steps of the Charleston with increasingly flamboyant improvised moves. These include fast spins, cartwheels, throws, and jumps, where the woman leaps with her legs straddling her partner’s waist or shoulders. After the Lindyhop became popular with white dancers, it became known as the Jitterbug, and enjoyed a revival in Britain and the United States during the 1980s and 1990s.

The Rumba is an incredibly distinctive Latin American dance, in 4/4 time (the most common musical form). It originally evolved as a courtship dance popular in Cuba, and was introduced to the United States in the 1930s. It is danced by a lone couple, and is characterized by a swaying motion of the hips.

Akin to the Rumba, the Salsa is also a Latin American dance performed in 4/4 time. Quite literally meaning sauce (with spicy connotations), Salsa combines both Caribbean and European elements. Although the name itself is quite a recent invention (coined in the 1960s), the origins of the dance go back to older dances, most notably Son, from Cuba. It is usually danced by couples and is characterized by rhythmic footwork, fluid turns, and quick changes of balance. Salsa achieved international popularity in the 1980s, and has continued to evolve ever since.

Samba is a generic form of Brazilian music and dance, which can include many varied forms and styles. Unlike the Salsa which usually involves dancing with a partner, a Samba is often danced solo or in a group, as well as with a partner. It is usually in a steady 2/4 time rhythm, featuring a syncopated accompaniment.

The Tango is a South American dance performed to a slow 2/4 time. It is characterized by sensual partnering and fast interlocking footwork, based on dances brought to Argentina by African slaves. It was originally performed in the slums of Buenos Aires in the 1860s, closely linked to Tango music and song. In the 1920s however, the Tango became popular worldwide as a form of ballroom dancing, later popularised in stage-shows and Hollywood films, as well as musicals and ballets.

The origins of the Waltz are unclear, but it is a German-Austrian turning dance (with many similar precedents), performed in 3/4 or 3/8 time. The name Waltz appeared in the late 18th century, and it quickly gained in popularity through the music of Lanner and the Strausses. Some European authorities tried to ban it however, in the beginning, on account of the daringly close embrace required between the male and female dancers. It features prominently in many ballets, including Swan Lake, Sleeping Beauty, and The Nutcracker.

All of the facts in this post were taken from The Oxford Dictionary of Dance (2nd Ed.), a unique reference work on all aspects of dance and performance.