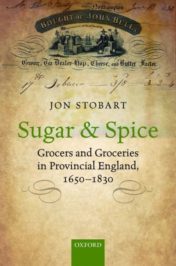 Sugar and Spice: Grocers and Groceries in Provincial England, 1650-1830

The Worcester joiner, John Read, appears to have been a regular customer of Thomas Dickenson, but two purchases stand out: on 25 December 1740 and again on 26 December 1741 he bought sugar plums and spices to the value of 5 shillings and 2 pence. Perhaps these were a special treat for his family, marking the festive season with small luxuries to relieve what was probably an otherwise rather unremarkable diet. Imported groceries were by no means a novelty, of course. In elite households, sugar and spices had long been used liberally to make food more flavoursome, but also to mark status—these were costly goods, imported from overseas and often from the other side of the world. They were by no means out of reach for poorer consumers, but—as Read’s small purchases make clear—they were hardly an everyday item.

Thomas Turner, a Sussex shopkeeper and likely a notch or two wealthier than Read, ate well enough in his own home and more occasionally at the houses of friends and relations. Meals were centred around roast or boiled meat, vegetables, and boiled puddings, the last of which often called for pepper or nutmeg, sugar, raisins, and sometimes almonds. His Christmas dinners (carefully recorded each year in his diary) were distinct in the slightly larger variety of food on offer. They typically comprised roast or boiled beef, turnips, potatoes, pearl barley pudding, plum suet pudding, and bullace pies. Local fresh produce was thus combined with sugar, spice, and dried fruits from further afield to create a modestly generous spread.

These were a long way from the kinds of menus that appeared in the cookbooks published in growing numbers during the eighteenth century. Indeed, it is unlikely that Turner’s wife had either the resources or the inclination to consider using one of these publications to plan or guide her cooking. They would have been more use to Grace Nettleton, who kept house for her nephew-in-law at Tabley Hall, Cheshire in the 1710s. She made occasional purchases of pepper, cinnamon, nutmeg, and mace—a fairly typical set of spices—and also bought sugar and dried fruit. Grace was thus well equipped to prepare a wide range of the dishes appearing in books such as Henry Howard’s England’s Newest Way in all sorts of Cookery, first published in 1708. However, many of the purchases that she made were cakes, biscuits, and pies, suggesting that wealthy consumers then as now were happy to buy pre-made goods.

Of particular interest in this respect were two sets of mince pies bought on 25 December 1720. Six of them cost a shilling apiece and were probably intended for the family since they were distinguished from “eight mince pies for ye folks,” which cost just 6 pence each. It is impossible to know exactly what differentiated the two sorts of pie, but there are clues to be found in cookbooks. Howard, for example, provides two recipes. The first uses neat’s tongue, suet, and currants, flavoured with cloves, mace, preserved orange, and lemon peel, and cooked in verjuice, rosewater, and sack. These, he recommends, should be cooked in a variety of elaborate shapes. The second is more modest: the tongue is replaced with eggs, the currants with cheaper raisins and pippins, and the preserved orange, verjuice, and sack are omitted. The result is less rich and less costly.

Of course, the other thing of note in Grace Nettleton’s purchases is that the baker’s or confectioner’s shop where the mince pies were bought was open on Christmas Day itself. This was by no means unusual in the eighteenth century; whilst rather more than simply another trading day, only occasionally does the festive season seem have impacted on shops in a direct sense. One rare example comes from Norwich in the 1780s, where a confectioner called widow Cockey advertised that, for Twelfth Night, her shop would be “handsomely illuminated and decorated after the London taste with Plumb Cakes.” Not to be outdone, another confectioner announced that “his Shop will be illuminated in a most elegant Manner, and decorated in the Pastry Way, with all the Ornaments that Art and fancy can invent.” Then as now, it seems, Christmas was an excuse for additional advertising and promotion.

Featured image credit: “Home made mince” pies by Nick. CC BY 2.0 via Flickr.

Jon Stobart is Professor of History at Manchester Metropolitan University. His book Sugar and Spice: Grocers and Groceries in Provincial England, 1650-1830 is now available in paperback. You can follow him on Twitter @Jon_Stobart.