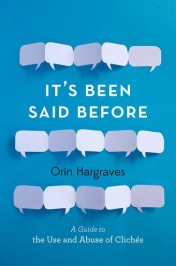 It's Been Said Before: A Guide to the Use and Misuse of Clichés

The election campaign season licenses two cohorts—politicians and journalists—to take up an even greater share of public discourse than is normally allotted to them. Both of these groups have a demonstrable and statistically verifiable tendency towards cliché, and so it is to be expected that in what’s left of the run-up to the US elections, the public forum will be awash in clichés. And so it is!

First, let’s look at the presidential candidates themselves. Like nearly all good politicians, both Hillary Clinton and Donald Trump are adept at speech patterns that make them agreeable to their supporters. Clichés, owing to their familiarity and frequency, are often used by politicians because they demonstrate the ability to relate to ordinary people on familiar ground.

Hillary Clinton is the more conventional candidate and she is also a conventional user of cliché. In her recent speech to the American Legion, she extols veterans because they “put their lives on the line” to protect “the greatest country on Earth.” She has “bedrock principles” and “feels passionately” about veterans’ access to healthcare. She thinks we have to “step up our game” regarding cyberattacks and she’s going to “work her heart out” to implement her plans. She introduces major statements with formulas like “Let’s be clear” and “Make no mistake” in the tradition of many politicians who have gone before her. Still, for all this, no one would argue that Clinton’s speech is mired in cliché; the small handful noted here in a speech of four thousand words is not at all excessive.

Trump’s speech habits have not escaped the notice of language pundits. He is repetitive, bombastic, and relatively limited in vocabulary, but for all that, he is not a frequent user of the expressions that we typically classify as clichés. One reason for this may be his simple speaking style. Many of the phrases that we think of as clichés are also idioms, so their meaning is not compositional—you can’t derive the whole meaning from the sum of the parts. Donald Trump is a rather plain talker and is not frequently given to flights of figurative language, a domain in which many a cliché reside.

Donald Trump is, however, a practitioner of one speech habit that has the whiff of cliché, and that is what I call modifier fatigue—the overly predictable use of certain modifiers and intensives. Modifier fatigue arises from the lockstep fashion in which speakers (or writers) choose a particular modifier in preference to any other that might be used, or in preference to no modifier at all. The modifier’s meaning is thus diluted, eventually to the point of meaninglessness.

Trump draws from a relatively small collection of intensifiers, despite his touted claim of knowing the “best words.” Trump is fond of intensifying with “so”—in fact, the only instances of “so” in his recent speech to the American Legion are intensives: he utters two instances of “so much,” a “so many,” a “so desperately,” and a “so important.” Another of Trump’s best words, apparently, is “best”: five times per thousand words for Trump, once per thousand words for Clinton in their speeches to the same group.

Trump also likes to characterize various phenomena as “incredible.” He does not seem to intend the word in the literal sense (“too extraordinary to be believed”) but rather in the informal, colloquial sense (“amazing, exceptional”) and nearly always in a positive way: he compliments the veterans’ commanders on having done “such an incredible job” and adds that we want our kids to learn the “incredible achievements of America’s history.”

If this short sampling does not seem adequate to account for the deluge of cliché in which we now flounder, it’s because I have not noted the main source: the journalists who cover the election.

Journalism has long been the true home of the cliché, and in the forcing house of a presidential campaign, “no holds are barred!” “All the stops are pulled out!” “No stone is left unturned” in the journalistic enterprise of converting events of the day into formulaic boxes of comprehensibility. Cliché in TV and print journalism is currently so thick that that you can—well, I don’t even have to finish that one. You can test this for yourself by searching in Google News for co-occurrences of the candidates’ names with various tired expressions. Here are some of the rich pickings:

Is there an alternative to this mind-numbing reduction? Indeed there is, and it is laid out refreshingly in George Orwell’s timeless essay, “Politics and the English Language.”

A scrupulous writer, in every sentence that he writes, will ask himself at least four questions, thus: What am I trying to say? What words will express it? What image or idiom will make it clearer? Is this image fresh enough to have an effect? . . . But you are not obliged to go to all this trouble. You can shirk it by simply throwing your mind open and letting the ready-made phrases come crowding in. They will construct your sentences for you — even think your thoughts for you, to a certain extent — and at need they will perform the important service of partially concealing your meaning even from yourself.

Orwell’s advice notwithstanding, it doesn’t seem likely that the end of the election season will leave readers stranded, “high and dry,” with no clichés for comfort. We can look forward to learning that one candidate has achieved a “decisive,” “landslide,” or “resounding” victory, while the other suffers an “embarrassing,” “disastrous,” or “heartbreaking” defeat.

Featured image credit: trump and hillary on stage together by Paladin Justice. Public Domain via Flickr.

Orin Hargraves is a lexicographer and author of language reference books. He grew up in the mountains of southwestern Colorado and graduated from the University of Chicago. A past president of the Dictionary Society of North America, Hargraves has contributed to dozens of dictionaries and other language reference books. He currently lives in Niwot, Colorado, and researches the computational use of language at the University of Colorado at Boulder. Orin is the author of It's Been Said Before: A Guide to the Use and Misuse of Clichés.