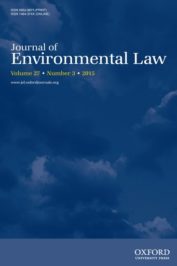 What are the narratives we can tell about the future of UK environmental law in light of the result of the EU referendum? Any answer is not just important for the UK, but will also directly shape our understanding of what nationhood means in an era of globalisation. That sounds a rather grandiose statement to make, but let us explain.

One narrative about UK environmental law’s future is appealing in its simplicity. The EU, with its Treaty commitment to ‘a high level of environmental protection’, has been a major source of environmental law in the UK. Clean water, clean beaches, waste regulation, and habitat protection are just a few things that EU directives have set as legislative goals. Leaving the EU can thus be seen as an abandonment of these goals. This is particularly when a number of Leave advocates were promoting a deregulatory agenda of reducing red tape. Linked to this notion of deregulation is the oft-repeated demand from the Leave campaign to return power to the UK. Vote Leave was promoted as a vote for sovereignty and ‘taking back control’ – voting remain was understood as the opposite of those things.

Yet, this binary narrative ignores the fact that EU environmental law is a product of the interplay between different Member States’ legal cultures and the forces of harmonisation. The EU has evolved into one of the most sophisticated multi-level governance systems of the contemporary age and EU environmental law reflects this fact. Its main legal forms are directives that are required to be in integrated into national legal orders and are primarily enforced in national courts. Its operation involves a multitude of legal actors at all levels of government and the end result is a dynamic set of legal regimes with novel processes, remedies, rights and duties, which cut across public and private orders and are not just EU in nature. For example, environmental impact assessment has given rise to a rich body of UK case law concerning its legal nature. The EU air quality regime has similarly required UK courts to reflect on their remedial powers.

This narrative also ignores that the EU is just one emanation of the European order. The Council of Europe and the UN Economic Commission for Europe also generate norms that become binding on the UK, including in the environmental sphere. It follows that a ‘sovereign’ UK will continue to be embedded in a broader governance framework, which may constrain its choices in a post-EU world.

The global lessons of the last thirty years have been that environmental law is inherently multi-level, polycentric and requires interstate co-ordination.

None of this is surprising. The global lessons of the last thirty years have been that environmental law is inherently multi-level, polycentric and requires interstate co-ordination. Legal cultures are unique but environmental problems are universal. Moreover, addressing environmental problems requires all levels of government, as well as co-operation between the public and private at different levels in nuanced ways. Nor is this simply a tension between the state and the supranational. As the aftermath of the Brexit referendum clearly shows, differences within countries must also be reconciled in the governance process.

Practice and scholarship has evolved, often in quite sophisticated ways, to address this state of affairs. Scholars talk of ‘uploading’ and ‘downloading’ regulatory regimes, ‘regulatory transplants’, ‘regulatory capitalism’ and ‘regulatory competition’. Moreover, concepts of ‘transnational environmental law’, ‘global environmental law’ and ‘a human rights approach to environmental protection’ also try to capture the complexities of regulation in this sphere.  Behind all this jargon exists a simple reality – nation states are interconnected by markets, by politics, and by geography.

None of that is easy to express however, particularly in the context of a referendum that by its nature required citizens to make a choice between ‘Leave’ or ‘Remain’. But in the post-referendum era, the problems of this duality and the need to understand the ways in which polities are interconnected become even more pressing. While no one doubts the importance of ideas of sovereignty, its rhetoric should not be seen as an answer to the challenges of the post-Brexit world. We find ourselves in uncharted political, intellectual and legal territory. The challenge for practitioners and scholars moving forward is how to evolve an inherently multi-level subject in light of these circumstances in a robust and legitimate way. While Brexit is a distinct UK phenomenon, the issues it raises for environmental law are not. How much room is there in environmental law for sovereignty and control? How will existing structures of cooperation be reshaped in light of this paradigm shift? Does theory need to adapt in order to accommodate changes to the political and legal realities? In short, how do we reimagine environmental law in light of shifting political discourses?

What can be seen from above is that narratives matter because they shape how we see the world and the questions we ask about it. Seeing the future of UK environmental law as a binary choice ignores the rich complexity of this area of law and thus discourages the asking of constructive questions. Seeing it in more multi-level terms does not dismiss ideas of national self-definition, and has far greater potential to foster a more sophisticated and constructive narrative about the future of environmental law. Not just for the UK but for other legal cultures as well.

On 23 November 2016, the Journal of Environmental Law and the Edinburgh Law School will be hosting a half day workshop entitled ‘Re-Imagining Environmental Law in an Age of Sovereignty and Control’ to catalyse discussion. The workshop has a twofold purpose: to deepen the debate and to start to develop a conceptual frame for moving forward. The changing landscape will be considered from the perspective of different levels of governance; specific subject areas; and in relation to both practice and academe.