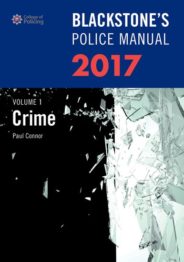 Blackstone's Police Manuals, endorsed by the College of Policing, are the only official study guides for the NPPF Step Two Legal Examination (formerly OSPRE Part I). The four volumes of Crime, Evidence and Procedure, Road Policing, and General Police Duties cover all aspects of criminal law and procedure, with key parts of legislation reproduced for your reference and with each chapter professionally checked and reviewed by the College of Policing.

The record-breaking mobile app Pokémon Go has been downloaded over 75 million times worldwide, a number set only to increase as the game is released in more territories.

For anyone still in the dark, Pokémon Go is a virtual reality game which uses GPS to create a map on the player’s mobile phone screen, placing images of Pokémon seemingly in the real world. It has been a huge commercial success – but the game that everyone’s talking about hasn’t come without its problems.

What five common crimes have police officers had to attend to as a result of this craze taking off?

The most commonly reported Pokémon Go related crime seems to be theft. There have been multiple incidences of players having their phones snatched out of their hands while not paying attention to their surroundings, as well as cases of criminals setting lures to draw unsuspecting victims to secluded areas to rob them.

Players have been warned to be careful about entering private property without permission. Whether wandering onto the property by accident due to being absorbed in the game, or by deliberately seeking out Pokémon, some players have been causing a nuisance to property owners.

Similarly, instances of people calling the police due to feeling threatened or being caused significant distress as a result of Pokémon placed on or nearby their property could result in harassment charges being brought to players. In one reported case, “at least five individuals knocked on plaintiff’s door, informed plaintiff that there was a Pokémon in his backyard, and asked for access to plaintiff’s backyard in order to ‘catch’ the Pokémon.”

The potential for road-related incidents while playing Pokémon Go are numerous, not least with pedestrians stepping into the road without looking whilst being more concerned with their phone screen. While mobile phones causing road traffic accidents is perhaps nothing new, there have also been reports of a multi-car pileup caused by a Pokémon Go playing driver, as well as one distracted user crashing into a police car.

In the process of downloading the app and in order for the game to work, users are providing detailed information about their location, along with other personal data. Although there have been no reported cases, Pokémon Go players run the risk of losing that data to hackers, potentially falling victim to credit card fraud or identity theft.

There are undoubtedly other ways that Pokémon Go players will fall victim to, or commit, crimes while playing the game, as use of the app continues to increase. Although, it’s not all bad news — there are also reports of Pokémon Go players helping to solve crimes too.

Heather Saunders is a Marketing Executive in the Law team at Oxford University Press, working on the Blackstone’s Police Manuals 2017.