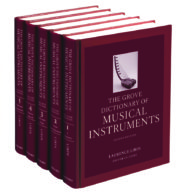 The Grove Dictionary of Musical Instruments

Available in print and on Oxford Reference this dictionary is the largest, most comprehensive reference publication on musical instruments of the world yet produced.

Every summer since 1895, the Henry Wood Promenade Concert (commonly known as the BBC Proms) presents an eight-week orchestral classical music festival at the Royal Albert Hall in central London. This year’s Proms put a special focus on cellos.

Invented in the early 16th century, this massive instrument (second in size only to the double bass in the strings family) has a highly versatile history. The Baroque period saw Bach composing unaccompanied cello suites; Haydn, Schumann, and Brahms made use of cellos in concertos in the following Classical and Romantic eras; in recent times, there has been a rise in solo pieces, and soloists can frequently be found playing modern pop and rock music.

Since its birth in Europe, the cello has traveled all over the world, becoming a fixture in Chinese orchestra. Its unique tone and fluidity has made it a popular instrument in our time, making accomplished cellists such as Yo-Yo Ma and Jacqueline du Pre household names.  In celebration of this year’s Proms, and the cello, allow us to present a list of interesting things you might not have known about cellos.

Read more about the cello and its history in The Grove Dictionary of Musical Instruments.