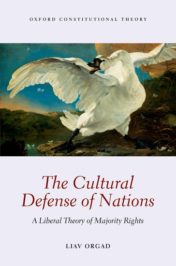 Finding a basis for commonality and social identification is one of the greatest challenges of the 21st century. From Britain to the United States, France to Australia, Western states are struggling with an identity crisis: how to cultivate a common cultural ‘core’, a social ‘bond’, which goes beyond the global economy and political liberalism. It is too early to predict whether Brexit is the last gasp of the old structure of national identity, or its revival. Some of the key factors involved in this quest for identity are Brexit and Britishness, the challenge of migration, the European Union, and Brexit and the Nation-State.

The debate over the meaning of being British has been a central feature in British politics over the last decade. Back in 2005, in order to promote attachment to British values, the Home Office introduced a ‘Life in the UK’ citizenship test, which every person wishing to settle in the UK must pass. Three years later, in 2008, a government committee found that there had been a diminution in British identity; in order to foster community cohesion, it proposed an American-style pledge of allegiance to be recited in public schools. In 2014, following the ‘Trojan Horse affair’ in Birmingham, then–Prime Minister David Cameron pledged to promote belief in British values as a core curriculum component in every school. In 2015, the House of Commons Political and Constitutional Reform Committee held a public competition in order to find a preamble for a written UK Constitution; preambles, it stated, can foster community cohesion and express shared values.

A citizenship test, a loyalty oath, a core curriculum, a preamble—they all seek to construct a unique character to be shared and celebrated. But it is still difficult to specify what it means to have a British identity, or how legitimate it is to impose it on newcomers. Britain resembles a nation in search of a meaning, and Brexit is just another step in the journey in search of an identity.

The Challenge of Migration

Massive population movements to and within Europe are seen as the biggest challenge to the self-image of European democracies. Mass migration has inflamed cultural anxiety. The fear of the ‘Other’ was a central reason for Brexit (public polls show that two main reasons were migration and sovereignty). The influx of refugees and migrants, together with the rise of multiculturalism and minority rights, has challenged the democratic assumption that the majority group ‘can take care of itself’. Majority groups in Europe have become smaller in size—numbers matter, especially in a democracy!—and their culture has become more ‘needy’.

The EU has done little to address the challenge of migration. The lack of a clear EU immigration policy leads to a situation where a person wishing to become British can be naturalized in a more permissive state, for instance Sweden—or even ‘buy’ citizenship that is offered ‘for sale’ in Europe—and then relocate to a state with a stricter regime, for instance Britain. This creates a sort of ‘forum shopping’ where a person can choose the state with the most lenient requirements.

National identity is challenged in Europe for another reason—the EU. The concept of Union citizenship was not seen as revolutionary in the early years of the Union. With the establishment of Union citizenship by the Maastricht Treaty in 1992, most people saw EU citizenship as a minimalist concept intended to facilitate labour mobility and promote economic interests; the EU, however, has blossomed to be a supranational form of government. It has adopted Directives that have turned national citizenship into a weaker concept; the distinction between Union citizens and long-term residents has become thin. European courts, too, have narrowed the power of Member States on nationality issues. The submission of nationality policies for the approval of justices in Strasbourg was not foreseen.

The Europeanization of Member States acts, unintentionally, as a burial of the nation-state, and triggers a new form of nationalism—majority nationalism. Brexit is a ‘Yes-vote’ for the nation-state. It is a form of ‘cultural defense policy’ intended to guard Britain from what some people see as a consistent erosion of its national culture and sovereignty. That’s the greatest challenge of the European Union—how to balance EU jurisdiction and the sovereignty of Member States to preserve the core of their constitutional identity. In at least four EU states there is a majority to leave the Union; this majority is not necessarily against the European Union but, rather, for the nation-state and the idea of self-determination.

Brexit and the Nation-State

Brexit poses a challenge to the West—can it be both open and global and, at the same time, keep a national ‘core’ that distinguishes the ‘here’ from the ‘there’? In a deeper sense, Brexit invites us to observe the fundamental changes that concepts of sovereignty, self-determination, and the nation-state are currently undergoing.

Globalization, Europeanization, and immigration are not bogeymen, but neither is national identity. Without a national ‘centre’, societies are becoming more divided than ever, drifting, and falling apart. The Treaty of Lisbon has adopted a clause that provides that “The Union shall respect the equality of Member States before the Treaties as well as their national identities, inherent in their fundamental structures, political and constitutional” (article 4(2)). Brexit is a call to the EU (and to national governments) to find ways to implement this clause.

Liav Orgad is an Assistant Professor of Law at Interdisciplinary Center Herzliya (IDC), a Marie Curie Fellow at Freie Universität Berlin, and a Fellow-in-Residence at the Safra Center for Ethics at Harvard University. He specializes in comparative constitutional law, comparative immigration law, constitutional identity, and citizenship theory. Dr Orgad has been a Fulbright Scholar at NYU Law School, a Jean-Monnet Fellow at the European University Institute, a Visiting Professor at FGV Direito Rio, and a visiting scholar at Harvard Law School, Columbia School of Law, and Universität Luzern. He is the recipient of Dan David Prize for Young Scholars of Exceptional Promise (2013), Russell Sage Presidential Authority Award (2012), Eric Stein Prize for Best Scholarly Article by the American Society for Comparative Law (2011), and the Wolf Prize for Outstanding Achievements of Young Scholars (2010).