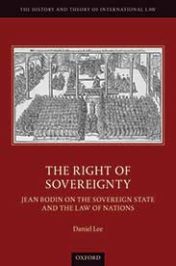 The Right of Sovereignty

Sovereignty is the grand prize of statehood in public international law, the touchstone of political independence. Its value derives from the monopoly it confers upon its holder, empowering it to do things that no else can—making and unmaking law, declaring war, signing treaties, establishing courts, laying taxes.

In principle, only states are supposed to enjoy this monopoly on sovereign rights. The historical record of the past half-century, however, reveals a different reality as these “sovereign functions” of states, as Frédéric Mégret has recently described them, have been delegated away to international governing bodies and courts or, in some cases, privatized entirely. The sudden de facto sovereignty acquired by the Taliban over Afghanistan in 2021 is only the most recent example illustrating the steady pace of sovereignty’s seemingly irreversible erosion and reconstitution in global politics.

The result has been an uneasy ambivalence about the place of sovereignty in the twenty-first century. Of course, populist politicians—the Bolsonaros, the Trumps, the Johnsons of the world—will continue to find ways to exploit sovereignty as a useful tool for electoral politics and as a justification for rejecting multilateralism. Indeed, the Brexit referendum of 2016 and the American withdrawal from the Paris Climate Accord in 2017 have been characterized as “reassertions” of a dormant national sovereignty directed against faceless “global” elites.

At the same time, a general skepticism about sovereignty, in general, as an organizing principle of law and politics, has emboldened critics who would prefer to see a world without sovereignty. Only then can it be possible to realize what has been described as the “last utopia,” a durable regime of borderless global justice and human rights.

Realizing this vision of a sovereignty-free world has necessarily involved looking to the past, if only to understand the origins of this inheritance. One name always stands out above others in this search: the early modern French jurist and philosopher, Jean Bodin (c.1530-1596). More than anyone else, Bodin is credited with the (dis)honor of inventing the concept of sovereignty in its recognizably modern form in his monumental treatise on the state, Six Livres de la République, first published in 1576. In that work, Bodin offered what has become the canonical definition of sovereignty in the history of political and legal thought—the “absolute power” of the state, a quality essential to securing political independence.

For generations, commentators treated Bodin’s analysis as a recipe for absolutism and a portentous vision of a modern “Westphalian” international order made up of territorially bound states, each with “absolute power” over its realm and people. Yet, Bodin’s theory of sovereignty was never intended to be a license for complete lawlessness, a point which he underlined with the observation that even sovereigns are bound by peremptory norms and requirements deriving from the law of nature [ius naturale] and the law of nations [ius gentium].

In my book, The Right of Sovereignty, I’ve documented many of the ways that Bodin repurposed the ius naturale and ius gentium as peremptory devices to constrain sovereignty, by burdening sovereign states with obligations which must be performed. While the classic example is the repayment of sovereign debts owed to private creditors, these sovereign duties arising from such peremptory norms also included a class of duties known generally as officia humanitatis, the “duties of humanity.”

Originally a term used in classical literature by writers such as Cicero, Quintilian, and Lactantius to indicate everyday common courtesies, officium humanitatis would later come to be associated with supererogatory duties in general, such as duties of hospitality, gratitude, courtesy, beneficence, and fidelity. Early modern jurists such as Grotius, Pufendorf, and Wolff would later characterize these humane duties as “imperfect,” because their performance, while virtuous and expected, was always optional. So, while it is morally upright and decorous to show, say, hospitality to strangers or gratitude to one’s benefactor, these are not strictly obligatory or actionable in a legal sense. Though it may be indecorous, discourteous, and, as Pufendorf once put it, even “boorish” in failing to observe such duties, one cannot, at least in modern law, be sued for inhospitality or ingratitude.

Bodin invoked these “humane” duties to reinforce a radically democratic point: even the mightiest of sovereigns, in spite of all their “absolute” sovereignty, remain bound to observe the same duties of humanity that the lowliest of subjects are always required to follow. He even borrows from the most advanced legal theories of contract enforcement then available, developed by canon lawyers of the Church, to argue that courts, as agents of equity, play an indispensable role in ensuring that even sovereigns perform these duties.

Applied to sovereign states, these humane duties translate into concrete policy prescriptions. For example, cash-strapped debt-burdened sovereigns, tempted to clip their coins or otherwise devalue currency, are strictly prohibited from doing so, in Bodin’s analysis, because it would be a direct violation of the humane duty of fidelity and fair-dealing owed to other sovereigns and to potential creditors. Reliably maintaining the value of one’s money as instruments of commerce, Bodin’s argument goes, reinforces the faith that sovereigns must keep not only with foreigners, but also with their own citizens who rely on stable monetary instruments.

Even more striking is the humane duty of mutual aid. Applied to sovereign states, Bodin translates it into the broad duty not only to receive and protect refugees fleeing oppression and sectarian violence, but also the duty of non-refoulement, prohibiting sovereigns from repatriating refugees to their country of origin, where they may be tortured or killed.

Bodin, traditionally viewed as the prophet foretelling the advent of the classical Westphalian theory of sovereignty, actually turns out then to undermine some of its foundational principles. What seems to have mattered more were the international duties entailed by the concept of sovereignty. So much of modern state-centric international law has been constructed on the assumption of the “absolute” rights of states, not only against other states, but even against their own citizens. But that leaves out the other half of the picture that Bodin—along with Gentili, Grotius, Pufendorf, Vattel—all acknowledged: the humane duties of sovereign states. Reimagining international law might well begin by recapturing these duties.

Daniel Lee is Associate Professor of Political Science and Director of Graduate Studies in Political Science at the University of California, Berkeley. He specializes in political theory, the history of political thought, and jurisprudence. He is the author of Popular Sovereignty in Early Modern Constitutional Thought (OUP, 2016) and A Division of the Whole Law (forthcoming with OUP).