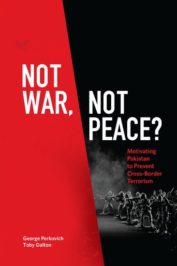 Not War, Not Peace

As the new year dawned on 1 January 2016, six heavily-armed men crossed through a marshy section of the Punjab border from Pakistan into India. Disguised in Indian Army fatigues, they commandeered first a taxi, then a small SUV, eventually covering the approximately 35km to reach the Air Force base at Pathankot. There, they cut through perimeter security wire, scaled a wall, and eventually launched an attack on the base on 2 January, presumably aiming to destroy helicopters and fighter aircraft stationed there. After an operation lasting several days, Indian forces killed the terrorists, who were linked to the Pakistan-based Jaish-e-Mohammad.

Scenes like this have played out on several occasions over the last few decades, most strikingly in the December 2001 attack on the Lok Sabha in New Delhi and in November 2008 at several locations in Mumbai. The actors, targets, and effects of the attacks vary, but the strategic conundrum for India’s leaders is the same: what Indian actions could motivate Pakistan’s civilian and military leaders to stop the groups conducting cross-border attacks?

Naturally, the impulse for India’s leaders, and indeed much of its population, is to punish Pakistan for giving support to (or at least tolerating) the militant groups that attack India. The most direct means of retribution would involve operations by Indian armed forces. Such options could include stand-off air strikes on facilities linked to militant groups or their presumed supporters in the Pakistan military, or perhaps a ground incursion by the Indian Army to hold Pakistani territory. India has been putting in place plans and capabilities—including oft-discussed proactive strategies, otherwise known as ‘Cold Start’—to carry out such direct punitive actions.

Other options could involve more covert means, such as using special operations forces or funding militant groups that attack the Pakistani state. Pakistani officials often assert that India supports Baloch separatists and the Pakistani Taliban, for instance, while there is mounting evidence that India has funded the MQM in Karachi. Yet current and former Indian officials indicate that its capabilities and intelligence assets in this domain remain underdeveloped. In any case, due to the covert nature of these options, they could not satisfy public demands for punishment following another attack in India.

Thus far, the record suggests that India’s development of punitive military options has not motivated Pakistani leaders to do more to stop such attacks from occurring. Yet, as attacks continue and as Indian leaders spend more money on military capabilities, pressure will grow, not least within the military, to use them in response to another attack. Executing a limited military reprisal could satisfy the desire for punishment, but risks triggering an escalating military conflict of profound cost and consequence. More difficult to answer, however, is the following: would a military operation to punish the Pakistan Army, the one organization presumably capable of reigning in militant groups, increase its motivation to do so?

This question is at the heart of India’s strategic conundrum, and is probably the reason why Indian civilian leaders have not heretofore given a green light to military responses. Capitulation and doing nothing in the face of continued attacks are also not reasonable options, of course, so India’s leaders look for other approaches. One option that deserves greater attention and analysis is what might be termed non-violent “compellence”.

The November 2008 attack in Mumbai, perpetrated by the banned militant group Laskhar-e-Taiba with strong indications of support from elements of the Pakistani state, produced an unexpected effect among the strategic elite in Pakistan. Due to the robust international condemnation of Pakistan, many otherwise reasonable Pakistani politicians and analysts could not believe the attack was carried out by Pakistanis. They instead averred that the Mumbai attack must have been an Indian plot specifically to damage Pakistan. What made this conspiracy theory plausible was precisely the perception that Pakistan had suffered considerable reputational, economic and diplomatic harm.

Indeed, the diplomatic retribution against Pakistan was swift. All five permanent members of the UN Security Council voted to blacklist Jamaat-ud-Dawa, the parent organization of Lashkar-e-Taiba that also functions as a charity. This was particularly notable because China, Pakistan’s ally, had previously vetoed measures to target this organization. Meanwhile, international diplomacy laid clear blame for the attacks on the Pakistani state. The French ambassador to India, Jérôme Bonnafont, for example, called on Pakistan to take action after the attacks, saying, “India is a victim in this attack and there is a clear link between the attack and Pakistan territory. We ask Pakistan to do the utmost so that this issue is settled and it does not happen again.”

It is difficult to discern the precise economic effects of the international reaction to the Mumbai attacks, given that the attack coincided with a global recession and a rise in domestic terrorism in Pakistan. However, there is no disputing that Pakistan’s economy has suffered. The value of the Pakistani Rupee depreciated significantly, from 62 rupees per US dollar in January 2008 to a low of 108 rupees per dollar in December 2013. Total foreign direct investment declined significantly from $5.3 billion in FY 2008 to $820 million in FY 2012, and has remained low at $851 million in FY 2015 even after a rebound in the world economy.

From these diplomatic and economic effects, Indian strategists can find the seeds of a strategy for non-violent “compellence”: the martialing of state diplomatic, economic, and social resources to build and sustain international pressure on Pakistan to force changes in its behavior. Through an anti-terrorism social media campaign that broadcasts the horrors of the terrorist attacks to the world, India could mobilize international public opinion against the actions of the Pakistani state. To impose further political isolation, India could convince its partners to postpone bilateral meetings with Pakistan or delay visa processing. In more tangible economic terms, India and its partners could seek to raise the prominence of anti-terrorism issues at the IMF to condition further financing for Pakistan on cracking down on terrorist groups that attack other states. Furthermore, India could seek an advance commitment from the United States and other major powers to cut security assistance to Pakistan after another terrorist attack in India, or to cease doing business with Pakistan Army-owned businesses. Such targeted penalties would strike directly at the coffers of the Pakistan Army.

The punitive benefits of this strategy may be less direct than military action, but they also come with far lower risks of an escalating conflict that could result in damage to India far greater than the instigating event. With a clear comparative advantage over Pakistan in economic clout and soft power, India can utilize these tools to isolate Pakistan internationally, which could in turn motivate meaningful counterterrorism action within Pakistan.