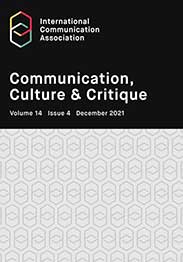 Communication, Culture & Critique (CCC) provides an international forum for critical research in communication, media, and cultural studies. We welcome high-quality research and analyses that place questions of power, inequality, and justice at the center of empirical and theoretical inquiry. CCC seeks to bring a diversity of critical approaches (political economy, feminist analysis, critical race theory, postcolonial critique, cultural studies, queer theory) to bear on the role of communication, media, and culture in power dynamics on a global scale.

Like all aspects of the cultural landscape in South Asia, the digital sphere is increasingly a site of fractious contestations where immense hope and optimism on social change and progress coexist alongside despair and anger around a host of social and political issues. South Asia’s postcolonial legacy, the teeming plurality of its cultural sphere, the ideological battles that play out in its electoral politics and the sheer scale of its digital population render its distinctions from other digital spheres as more than a mere cliché. These are further intensified by its smartphone-led digital economy that boasts of the lowest data rates in the world.

For scholars of the digital, this emerging space provides a rich site for insights into many key questions that have driven scholarship about the web from the time of its inception. What should be the balance of power between the people, the state, and the digital corporations that increasingly predominate the web? To what extent, if any, must free speech, commerce, and cultural creation and expression be regulated on a medium whose architecture can facilitate subversion by design and thus pose an existential threat to the sovereignty of the nation state? How do the eternal battles between national security and individual liberty play out in a region with its own historically rooted understanding of concepts such as liberty, subjectivity, community, and culture?

Home to a quarter of the world’s population, South Asia’s eight countries represent a broad spectrum of legal and political regimes of media regulation and ideological positions on free speech, which translate into varied attitudes towards emerging media technologies and the Internet. Having overcome their initial suspicions (often rooted in their colonial experience) towards the novelty and power of the digital media, these states have shifted gradually towards digitization and digital governance structures while walking a tightrope—they have tried to balance the medium’s potential in unleashing a communications revolution while also trying to shape it towards achieving specific national goals and values. The resulting patchwork of regimes, regulations and digital ecosystems make the region a microcosm of possibilities and challenges that will play a significant role in shaping the future of the web.

Signs of an alternative digital space shaped by the distinct historical lineage and contemporary politics of South Asia are visible in how citizens in the region are grappling with and responding to the challenge both of digital media oligopolies and the state’s overbearance in regulating the web (ostensibly on their behalf). These attempts can reveal glimpses of an alternative digital sphere that looks different from the established pathways elsewhere—the corporate-led digital ecosystem in the US, a state-led pushback as in the EU, and a seamless alignment between the digital sphere and the ideological party-state as in China. Juxtaposed alongside these visions lies the more utopian possibility of an organic, citizen-centered web that is propelled by and created for its users. While South Asia is far from achieving that in a full-fledged way, modest signs of alternative visions do appear. Perhaps the clearest exemplar of this vision is the activist-led and citizen-organized movement against Facebook basics in India that (in 2016) exerted enough pressure on the state that it had to renege on its commitments and overtures to the social media behemoth and ban its “free” connectivity scheme (that violated net neutrality) from the country. However fleeting a moment, the innovative strategies used by the #savetheinternet movement showed the possibilities of civic action mobilized around a digital cause (and against a Silicon valley technology giant) that revealed what sovereignty emerging from grassroots activism could look like in the digital era.

Alongside these moments of hope exist those of worry and despair that manifest in cultures of extreme speech, internet shutdowns, state led disinformation campaigns, and attempts to suppress dissenting voices marginalized along the vectors of religion, caste, and gender (among others). Newly introduced rules for regulating online content in both India and Pakistan show these states’ creeping attempts to curb and rein-in potentially threatening speech under the guise of national security or “cultural and moral” concerns. Hence, valorizing the empowering aspects of South Asian digital culture does not mean ignoring these equally dystopian tendencies that are often fueled by a majoritarian will to dominate and disempower the weak and the voiceless.

As we recognize these manifestations of power and control, we must do so alongside the resistances they generate (including against the new digital regulations) that adopt novel forms and idioms unique to the region. A now famous exemplar of these is the protests against the YouTube ban in Pakistan when activists walked the streets of Karachi dressed in a box with the YouTube logo asking common citizens for a hug to show solidarity for re-allowing the platform in the country.

As digital media make further inroads into the unconnected parts of the region, they will enmesh with pre-existing cultures generating dialectical forces of creation and censorship, state control, and user resistance as well as the three-way tussle between global digital oligopolies, sovereign states, and local innovation and ingenuity. This churning will yield rich case studies allowing us to build further on this forum’s commentaries to expand the burgeoning scholarship and theoretical categories for the region.

Sangeet Kumar is Associate Professor of Media Studies in the Department of Communication and the Director of International Studies at Denison University. His ongoing research examines the global dimensions of digital platforms with a focus on their role in shaping cultural creation and their imbrication within ongoing geopolitical tussles. He is the author of The Digital Frontier: Infrastructures of Control on the Global Web (Indiana University Press 2021).

Kalyani Chadha is an associate professor in the Medill School of Journalism at Northwestern University. Her research interests center on news and journalism practice, especially in the context of India. She is co-editor of Newswork and Precarity (January 2022) and is currently working on a book on digital journalism in India.

Radhika Parameswaran is Associate Dean and Herman B. Wells (Class of 1950) Endowed Professor in The Media School, Indiana University, Bloomington. Her research interests are feminist media and cultural studies, South Asia, and postcolonial studies. Her most recent publications include an article on gender and online comedy in India in Communication and Critical/Cultural Studies and the chapter “Global Feminist Positionality” in the edited volume Reflections on Feminist Communication and Media Scholarship.