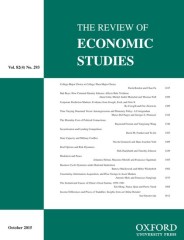 The Review of Economic Studies aims to encourage research in theoretical and applied economics, especially by young economists. It is widely recognised as one of the core top five economics journals, with a reputation for publishing path-breaking papers, and is essential reading for economists.

Almost everyone faces some risk of ending up old, sick, alone, and poor. The lengths of our lives are uncertain. Aging comes with increased chances of needing costly medical care. The loss of a spouse, often preceded by large medical bills, may leave one alone late in life. Absent a spouse or other family member to provide informal care, an expensive protracted stay in a nursing home may be needed due to dementia or disability. Women are particularly exposed to this risk. The picture below illustrates this point using data from the US Health and Retirement Study. It shows how the distribution of retirees across health status, marital status, and gender changes with age. Notice that the two largest groups of 65-year-olds are healthy, married men and healthy, married women. However, the largest group of 95-year-olds is unhealthy, single women.

This reality is one that all societies must face — how to deal with old, sick, and poor individuals who are alone and unable to improve their prospects by returning to work. Is there a role for governments to provide for these people? If yes, what does a good social insurance program look like?

The primary government insurance program for the elderly in the US and other OECD countries is usually a universal Social Security program. It is universal in that benefit eligibility does not depend on a person’s financial status. Many of these programs, such as US Social Security (formally known as the Old-Age and Survivors Insurance Program) and the US Medicare health insurance program, are pay-as-you-go, meaning that benefits paid to current retirees are financed by taxes on current workers. Economists have struggled to show that such programs improve people’s welfare. Since these programs pay out benefits to all retirees, regardless of need, they tend to be large in size. US Social Security was 4.9% of US gross domestic product in 2013. They also tend to have large distortionary effects on incentives to save and work. The costs of these distortions in terms of reduced savings and labor are often so large that they outweigh the benefits from insurance the programs provide. In other words, the economics literature has, for the most part, found that people would prefer to live in a society without these programs.

Why are means-tested programs for the elderly highly valued? They provide benefits to the people who need them most, when they need them most. For example, retirees can obtain Medicaid benefits if they either have low income and wealth or if they incur large, impoverishing medical expenses. These are exactly the situations in which such benefits are most valuable. Moreover, because they only provide benefits to those people most in need, these programs tend to be much smaller in size than universal social insurance programs, such as Social Security.

What does this mean for the future? The US and many other countries are starting to experience large and persistent increases in their old-age dependency ratios due to aging of the baby-boomers, increases in life-expectancy, and lower fertility rates. Higher old-age dependency ratios threaten the sustainability of pay-as-you-go social insurance programs because they place a large burden on workers. Ultimately, programs like US Social Security and Medicare will have to be reformed, and making these programs means-tested may help to improve welfare.

The changing nature of retirement