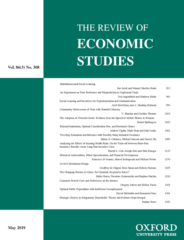 The Review of Economic Studies is essential reading for economists and has a reputation for publishing path-breaking papers in theoretical and applied economics, especially by young economists. Today it is widely recognised as one of the core top-five economics journals.

Air pollution continues to be a serious problem in many cities around the world in part because of a steady increase in car use. In an effort to contain such a trend and persuade drivers to give up their cars in favor of public transport, authorities increasingly rely on limits to car use. Some places have banned drivers from using their vehicles on certain days of the week. Good examples of these driving restrictions include Athens (where restrictions were introduced in 1982), Santiago (1986), Mexico City (1989), São Paulo (1996), Manila (1996), Bogotá (1998), Medellín (2005), Beijing (2008), and Tianjin (2008).

These restrictions may, however, create perverse incentives by encouraging people to purchase additional vehicles. This not only increases the number of vehicles but may also induce people to purchase higher-emitting vehicles. Mexico City’s Hoy No Circula program –which in 1989 prevented drivers from using their vehicles one day per week– confirm these fears. The ban didn’t reduce air pollution very much.

Vintage-specific restrictions are also in recent European programs. Authorities in Germany, for instance, have adopted low-emission zones in several cities since 2008. In 2016, the city of Paris banned any car built before 1997 from circulation within its limits weekdays from 8 a.m. to 8 p.m. Recent diesel bans in Madrid, London, Paris, and Rome, are another kind of vintage-specific restriction.

Of all the possible variations on a driving restriction policy one might think of, just banning older cars represents a radical departure from early designs. By allowing drivers to avoid being hurt by the restriction not by purchasing a second (and possibly older, more polluting) car but by switching to a cleaner car facing lighter or no restrictions, vintage-specific restrictions have the potential to significantly reduce air pollution.

How do these vintage-specific restrictions work in practice? Existing research suggest that it’s best for policymakers to design driving restrictions to work through the type of cars people purchase, never through how much they drive their cars.

By affecting purchasing decisions, a vintage-specific restriction can yield important welfare gains by moving the fleet composition toward cleaner cars. Emission rates vary widely across cars. That’s why in most cities older cars are responsible for most of the pollution. A driving restriction that places a uniform restriction upon all cars regardless of their pollution rate (like the one day a week driving ban) is sure to result in significant welfare losses. Such uniform policy not only fails to remove old cars from the road, it also reduces their prices, extending their lives and dampening sales of new cars.

Nano Barahona is a PhD student in economics at Stanford University. His main research interests lie in the fields of industrial organization, public and development economics, with a special interest in studying the impact of government interventions and their interactions with the private sector.

Francisco Gallego holds a PhD in economics from MIT. He is an associate professor of economics at PUC-Chile and serves as scientific director of J-PAL LAC. His areas of interest are development economics, the economics of policies related to car externalities, political economy, and the economics of education.

Juan-Pablo Montero holds a degree in civil engineering degree from PUC-Chile and MSc and PhD degrees from MIT. He is a  professor of economics at PUC-Chile and has been a visiting professor at the MIT Sloan School of Management and the Harvard Kennedy School of Government. His research and teaching are concentrated in the areas of resource and environmental economics and industrial organization.

The long-term effects of life events on happiness are overestimated