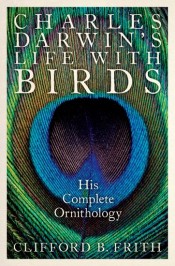 Charles Darwin’s five year voyage aboard H. M. S. Beagle and subsequent life work are as widely known as any events in the history of the biological sciences. His wide ranging bird work has been overshadowed by drab small birds he discovered in the Galapagos Islands–the Galapagos, or Darwin’s, finches. Legend has persisted that these birds provided his first insight into the origin of species by natural selection during his voyage. They didn’t, but birds called mockingbirds living among the Galapagos Islands did, nine months after leaving the archipelago, as he sorted his specimens and notes. Only now has Darwin’s ornithological writing been comprehensively complied, reviewed, and assessed, making it possible to review what he wrote about, then little understood, bird migration.

In his diary for 25 April 1826, 17-year-old Edinburg University student Darwin wrote “no swallows, or rather the genus Hirundo, have appeared in or near Edinburgh,” presumably because he knew swallows (Barn Swallow) would by then be preparing to nest at his family home in Shrewsbury, to the slightly warmer south of Britain (Browne 1995, Charles Darwin: Voyaging: 65-6). In 1838 he also, but most briefly, alluded to the then known Purple Martin migration in North America (Darwin 1838, Zoology of the Voyage of the H. M. S. Beagle: 38-9).

In his 1839 book Journal of Researches about the Beagle voyage, Darwin recorded that Green-backed Firecrown hummingbirds migrate to central Chile in autumn and in spring begin to depart as arriving Giant Hummingbirds replace them. During his time at Valparaiso this large hummingbird “had arrived in numbers, a little before the vernal equinox. It comes from the parched deserts of the north, probably for the purpose of breeding in Chile.” He came to believe that the firecrown did not breed in Chile, as “during the summer, their nests were common to the south of that country.” He observed that the literature indicated that North American hummingbird migration “exactly corresponds to what takes place in this southern continent. In both cases they move toward the tropic during the colder parts of the year, and retreat north before the returning heat. Some, however, remain during the whole year in Tierra del Fuego; and in Northern California—which in the northern hemisphere has the same relative position which Tierra del Fuego has in the southern—some, according to Beechey [presumably Frederick William Beechey], likewise remain.” (Darwin 1839, Journal of Researches: 331-2). This is broadly consistent with subsequent knowledge (Schuchmann 1999, Handbook of the Birds of the World, vol. 5: 632, 635).

Discussing bird vocalizations, Darwin noted “During the nocturnal migration of geese and other water-fowl, sonorous clangs from the van may be heard in the darkness overhead, answered by clangs in the rear.” He was describing “contact calls”, used by flocking birds to keep in touch, particularly when out of sight of one another (Darwin 1901, Decent of Man: 563).

Of migrating snipe, and of Eurasian Blackcaps, Nightingales and Western Yellow Wagtails, it was observed that males arrive on the breeding grounds before females (Darwin 1901, Decent of Man: 594, 327 respectively).

In The Origin of Species, Darwin explained how plants and animals could have dispersed to far-flung locations, including remote islands, by air, sea, and via animal agents: some birds mentioned were migratory ones. Several of his insights resulted from hypotheses conceived during his voyage, some subsequently tested by experimentation. He floated dead pigeons with seeds in their crops in tanks of artificial seawater, removing the seeds after 30 days to plant and found most germinated. As a floating bird can travel far on surface ocean currents during a month it is easy to imagine such corpses reaching islands to result in plants growing there. Migrating birds caught in a gale may travel at “35 miles [56 km] an hour” or more and could thus be displaced 500 miles [805 km] during the period that viable seeds remain in them (Darwin, The Origin of Species 1902: 509-10). Such birds might die after being displaced such distances to then float on the sea for weeks before swept ashore with their cargo of viable seeds. Wind-swept living birds also reach remote islands.

Hawks and owls (some migratory) regurgitate pellets of indigestible food a day or more after eating it, which may include viable seeds (from birds swallowed). Migrating hawks can cover a significant distance in a day. Darwin also noted that hawks look out for tired migrant birds and in eating them may disperse seeds within them. Herons eat fish that may have seeds within them, which can then be dispersed by the birds days later. Similarly, birds with seeds embedded in mud sticking to their legs, feet, beak, or feathers will transport viable seeds great distances (see photo). Darwin cites a correspondent on the English south coast who shot migrant wagtails, wheatears and whinchats as they arrived and “several times noticed little cakes of earth attached to their feet,” which could have contained viable seeds to be dispersed onto English soil (Darwin 1902, The Origin of Species: 510, 512).

Birds also disperse tiny animals. Darwin suspended duck’s feet in an aquarium where “many ova of fresh-water shells [snails] were hatching; and I found that numbers of the extremely minute and just-hatched shells crawled on the feet, and clung to them so firmly that when taken out of the water they could not be jarred off.” These molluscs survived on the duck’s feet for 12 to 20 hours, during which, Darwin observed, a duck or heron might fly 600 or 700 miles (966 to 1,127 km), and if blown to a more distant point or island, would surely alight on any available water and thus disperse the molluscs (Darwin 1902, The Origin of Species: 538).

This summarizes what Darwin published about bird migration: Not a lot given that he wrote so much about birds, including mention of some 600 species, but mostly original, novel, and ground-breaking for its time.

Feature image credit: Two Hood (Island) Mockingbirds, one of the group of mockingbird species found on various Galapagos Islands that first gave Darwin his insights into the origin of species by natural selection. Photo by Clifford B. Frith and used with permission.

Clifford B. Frith is an Australian ornithologist. He has held appointments at the Bird Department of The Natural History Museum, London, and performed ornithological research for the Royal Society of London. He has researched living birds in tropical Australia, New Guinea, South Pacific and many other locations. His doctorate involved long-term field and museum studies of the biology and evolution of the birds of paradise and bowerbirds. He is the author of over 100 ornithological papers in scientific journals and six books, including The Birds of Paradise: Paradisaeidae, The Bowerbirds: Ptilonorhynchidae, and Charles Darwin's Life With Birds: His Complete Ornithology.