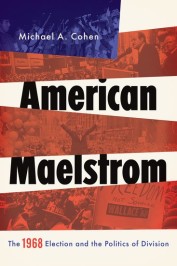 American Maelstrom: The 1968 Election and the Politics of Division

By late March 1968, President Lyndon Johnson’s presidency lay in tatters. Anger over the war in Vietnam and Johnson’s growing credibility gap had created a full-scale insurgency at home, within the Democratic Party. On 12 March, Minnesota Senator Eugene McCarthy won more than 40% of the vote against Johnson in the New Hampshire primary.

Days later, Robert F. Kennedy, Johnson’s greatest political nemesis, announced his intention to also challenge the president. I had been expecting it,” Johnson later matter-of-factly wrote in his memoirs about Kennedy’s entry into the race.

On the campaign trail, Kennedy seemed to be blaming every national infirmity on the president. At the Greek Theater in Los Angeles, he even went to far as to accuse Johnson of “calling upon the darker impulses of the American spirit.”

With Democratic voters in Wisconsin prepared to head to the polls on 3 April all signs pointed to Johnson suffering a catastrophic primary defeat to McCarthy’s energized and confident foot soldiers. Nationally, Johnson’s approval rating sank to 36 percent, and support for his handling of Vietnam plummeted to 26 percent. Missouri senator Stuart Symington told a closed-door meeting of his Senate colleagues, “Lyndon Johnson could not be elected dogcatcher in Missouri today.”

Beyond his immediate political challenges, a larger emotional toll was being taken on the president. He regularly shuffled from his personal quarters to the Situation Room in the basement of the White House in his bathrobe and slippers. In a meeting with his old friend Senator Richard Russell, he began crying uncontrollably. He felt “chased on all sides” by the growing dissent and anger over the war, the “inflationary economy,” and the “rioting blacks, demonstrating students, marching welfare mothers, squawking professors, and hysterical reporters.” Not since Lincoln had an American president faced as much domestic dissent as that which confronted Johnson in the spring of 1968.

Things soon went from bad to worse. On 26 March he met with a group of foreign policy “Wise Men” to discuss the situation in Vietnam – including former Secretary of State, Dean Acheson and LBJ’s own former national security advisor McGeorge Bundy. Two months earlier, the Vietcong and North Vietnamese had launched the massive Tet offensive, which punctured the White House’s argument that the war was being won.

Bundy, told Johnson, it was now clear that “we can no longer do the job we set out to do in the time we have left and we must begin to take steps to disengage.” The men who had built and nurtured a two-decade long policy of Soviet and Communist containment and now told a stunned president that the war on which he’d staked his presidency had all been for naught.

Five days later, on 31 March 1968, Johnson spoke to the nation from the Oval Office. “With America’s sons in the fields far away,” he told the American people in a deliberate and steady, but melancholy-filled tone, “with America’s future under challenge right here at home, with our hopes and the world’s hopes for peace in the balance every day, I do not believe that I should devote an hour or a day of my time to any personal partisan causes or to any duties other than the awesome duties of this office…. Accordingly, I shall not seek, and I will not accept, the nomination of my party for another term as your President.”

Johnson had long flirted with the possibility of not running for president. According to his chief of staff, Marvin Watson, LBJ said privately in January 1968 that he wouldn’t run. He had even asked his speechwriters to write up an addendum to his State of the Union address, announcing his withdrawal from the presidential campaign, which he allegedly “forgot” to bring to the Capitol. In mid-February he revisited the topic and was, according to one aide, “adamant” in his “determination to withdraw.” While he clearly appeared to be leaning toward dropping out, he also clearly had yet to make a final call.

In the end, no single knock-out punch drove Johnson from the race. Rather, a steady drumbeat of body blows felled him: Vietnam; McCarthy’s strong performance in New Hampshire; that son-of-a-bitch Bobby; a Congress that no longer bent to his will; and, finally, the Wise Men. It was what LBJ biographer Doris Goodwin called “the total impossibility of his situation.” Now events outside Johnson’s control, events he could no longer manipulate, forced a decision upon him.

The vigor and vitality with which Johnson had once stridden across the national stage seemed like a faint memory. The pressures of the job had overwhelmed and ultimately defeated him. “I’m tired,” he told friends. “I’m tired of feeling rejected by the American people. I’m tired of waking up in the middle of the night worrying about the war. I’m tired of all these personal attacks on me.”

Johnson’s announcement left many of the nation’s most prominent politicians at an uncharacteristic loss for words. “I don’t know quite what to say,” stammered Kennedy. Said McCarthy, “I think I’m surprised,” and, more drily, “Things have gotten rather complicated.” Barry Goldwater had perhaps the most down-to-earth reaction. “I went and had another drink. I just couldn’t believe my ears.”

On the morning of 31 March, Johnson seemed to his political opponents (and to some of his political allies) a sick, even deranged, man not to be trusted or believed. On 1 April 1968, he had been transformed into a selfless American hero who had fallen on his political sword for the good of the country. His 57 percent disapproval rating flipped to a 57 percent approval rating practically overnight.

Days after what Time called “the renunciation,” Johnson traveled to New York for the installation of the city’s new archbishop. As he walked down the center aisle of Saint Patrick’s Cathedral, the congregation of five thousand rose in a sustained standing ovation (an almost unheard-of occurrence inside a Catholic church). Equally euphoric were the crowds outside.

The outpouring of appreciation was about more than just Johnson’s abrupt exit from national politics. In his 31 March speech he announced that he would be pursuing a policy of de-escalation in Vietnam and preparing to “move immediately toward peace through negotiations” with the North Vietnamese. It gave Americans hope that an end to the war was possible. For a brief moment it appeared that the seemingly relentless process of national disintegration that the country had experienced in the first three months of 1968 could be reversed.

Four days later in Memphis, Tennessee those hopes would be dashed.

Feature Image: The Flag of the United States by Sam Howzlt. CC BY 2.0 via Flickr.

Michael A. Cohen is a national political columnist for The Boston Globe. He writes regularly on American politics and U.S. foreign policy and has previously been a columnist for the Guardian and Foreign Policy. He is the author of Live from the Campaign Trail: The Greatest Presidential Campaign Speeches of the 20th Century and How They Shaped Modern America, and most recently, American Maelstrom:The 1968 Election and the Politics of Division. He lives in Brooklyn, NY. Follow him @speechboy71 .