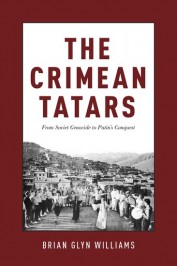 The Crimean Tatars: From Soviet Genocide to Putin's Conquest

On 12 November 2015 the Ukrainian Parliament took the bold step of recognizing the destruction of the Crimean Tatar nation by the Soviet Army in 1944 as a genocide. The surviving Crimean Tatars hope that this long overdue action will shine an expository light on a genocide that has been kept hidden for decades and is still not recognized by Russia. For the shattered remnants of this once mighty nation that represents Europe’s last descendants of the medieval Mongols, this move is a first step towards exposing a long-concealed war crime.

Crimean Tatar saboteurs have also recently been involved in the destruction of pylons carrying power lines to Crimea that have plunged the peninsula into darkness. They have prevented repair crews from fixing the damaged pylons and are demanding the release of Tatar leaders jailed by the Russian government in the Crimea.

These two events combine to shed light on a long history of repression of this small Muslim ethnic group that began in the Tsarist epoch and continues to this day.

For all its contributions to civilization, modern Europe has a dark history of genocide going back to the Russian Empire’s genocidal assault on an ancient Caucasus Mountains race known as the Circassians in the mid-19th century (this Muslim ethnic group was so thoroughly exterminated by Russian Imperial troops that most Europeans today have never heard of them). Among the small, relatively-unknown Muslim nations to have faced genocide in Europe were the Crimean Tatars. The Crimean Tatars, the pitiful remnants of a once great Turkic-Mongol race descended from Golden Horde, were ethnically cleansed by the Russians for centuries before being forcefully included in the Soviet Union.

During World War II, the Nazi Wehrmacht invaded the Crimean Peninsula and 20,000 Crimean Tatars from a nation of just over 200,000 (i.e. 10 percent) were mobilized to fight in the Red Army. When the Soviet Army defending the Crimea was shattered in October 1941, many of these Crimean Tatars joined the ranks of hundreds of thousands of Russians and Ukrainians who were captured by the Germans. These prisoners of war were often forced to join the ranks of the victorious Germans or face firing squads. Several thousand Crimean Tatar captives were thus forcefully conscripted into the German Army, along with hundreds of thousands of Russians and Ukrainians.

When the Germans were expelled from the Crimea in May 1944, local Russians exaggerated this collaboration and hid the fact that thousands of Crimean Tatars had fought against the German invaders as partisans (anti-Nazi Soviet guerillas). This anti-Tatar propaganda by local Russians in the Crimea came at a most unfortunate time. In the spring of 1944, as Soviet troops stormed towards Berlin and occupied much of Eastern Europe, Stalin made plans to go with the momentum and invade northeastern Turkey to annex provinces lost to Imperial Russia in the 19th century. He planned to use the Crimea as a springboard to launch naval operations against the Turks and feared that the Turkic-Mongol Muslim Crimean Tatars (who had previously been allies with the Ottoman Turks) would act as a pro-Turkish fifth column. To prevent such an outcome, the entire Crimean Tatar nation including women, children, and thousands of men still fighting in the ranks of the Red Army were cynically declared “izmeniky rodina” (traitors to the motherland). They were then slated for genocide (along with several other targeted nations, such as the Muslim Chechen highlanders and the Kalmyk Mongol Buddhists).

On 18 May 1944, Soviet Red Army troops and soldiers from the NKVD (the early iteration of the KGB) surrounded the Crimean Tatar hamlets that were primarily located in the south Crimean Mountains and on the coast. They then herded the startled inhabitants to collection points and drove them to the Crimean Autonomous Soviet Socialist Republic capital of Simferopol. Those who moved too slow or resisted were gunned down in cold blood. The Crimean Tatars were then forced onto cattle trains and shipped in “echelons” to unknown destinations deep in Soviet Central Asia. Thousands died on the long journey from dysentery, starvation, typhus, and other diseases and their bodies were thrown from the packed cattle cars.

Most of the deportees were sent to the desert republic of Uzbekistan where they were greeted by rocks thrown at them by local Uzbeks who had been poisoned by the KGB’s propaganda against the Tatar deportees. Thousands died in the succeeding months from exposure and starvation but the survivors (who were kept in “special settler” camps) ultimately constructed earthen houses or built sheds. They remained in their KGB-guarded camps working menial and unhealthy jobs in factories until 1956. That year, the new Soviet leader Nikita Khrushchev released the deported nations (there were seven in all) from their camps and allowed most of them to return to their homelands.

Tragically, the Crimean Tatars were not permitted to return to the Crimea because it had been converted into an All-Union resort during their absence and their villages in the Crimea’s warm southern coast and mountains had been settled with Russians. Thus the Crimean Tatars exile was to be permanent and this scattered nation was slated to disappear from history.

Against all odds the survivors (only 54% of the Crimean Tatars survived according to a Tatar self-census) managed to pass on a sense of Crimean Tatar identity to their children and grandchildren. As they gradually overcame their collective tragedy and adjusted to life in deserts of Uzbekistan, the survivors of this genocide taught their children that the Crimea was their true homeland. For decades they fought a battle against the Soviet system to return to their homeland and thousands were arrested or re-deported for daring to sneak into the Crimea.

Finally, with the Soviet Union’s collapse in 1991, tens of thousands of Crimean Tatars began a mass migration back to their cherished homeland on the shores of the distant Black Sea. There, despite attacks by local Russians, they built hundreds of squatter camps which gradually became simple villages and reestablished their nation. Today there are approximately 250,000 Crimean Tatars living uneasily in a land that was conquered by Vladimir Putin last year and annexed from the Ukraine to Russia. Despite Russian efforts to crush their annual commemorations of the Surgun (the Exile), on May 18th the Crimean Tatars gather in the graveyards of their ancestors that were bulldozed during their exile and say prayers for the tens of thousands of people that died in a genocide that the Soviets kept hidden from the world until 1991. The Crimean Tatars face an uncertain future in Putin’s Russia, but, like other nations including the Armenians and Jews who have experienced genocide, vow they will never let their children forget the attempt to exterminate them as a people.