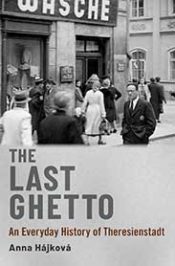 The Last Ghetto: An Everyday History of Theresienstadt

What was society like in the Nazi concentration camps and ghettos? Can we even speak of “society” in this context given the suffering of uprooted and imprisoned people, almost all of whom were eventually murdered? There is a widespread notion that the camps destroyed people and atomized society. Hannah Arendt, for example, argued that the totalitarian regime stripped detainees of all their characteristics of humanity until they were no longer moral persons.

By contrast, The Last Ghetto offers a new, systematic exploration of social relations in a Nazi camp. Using the ghetto of Theresienstadt (or Terezín in Czech) as a case study, my investigation shows how people imprisoned in this central European ghetto made sense of a terrifying new place in which they found themselves deciding with whom to share food and accommodation, or whom to join on transport to the East, connecting with friends old and new, and even falling in love. I interpret these moments in the context of everyday life in the camp.

To mark the 80th anniversary of the first transport to Theresienstadt on 24 November 1941, it is worth having a closer look.

Pavel Fischl was a young Czech poet who arrived to Theresienstadt with the second transport of young men deployed to set up the transit ghetto, known as the “construction detail.” He described how people got used to their frightening new surroundings:

“Not for nothing is it said that one even gets used to the gallows. We have all gotten used to the noise of steps in the barracks’ hallways. We have already gotten used to those four dark walls surrounding each barracks. We are used to stand in long lines, at 7am, at noon, and again at 7pm, holding a bowl to receive a bit of heated water tasting of salt or coffee, or to get few potatoes. We are wont to sleep without beds, live without radio, record player, cinema, theatre, and the usual worries of average people. [W]e have gotten accustomed to see people die in their own dirt, to see the sick in filth and disgust […] we are habituated to wear one shirt one week long; well, one gets used to everything.”

For Central and Western European Jews sent to Theresienstadt by the SS, their imprisonment was a shock. Most of them had come from the middle and upper-middle class. The crowded accommodation, meagre food, dirt, high mortality that particularly addressed the elderly, and fear of transports to the East had an equally chaotic and terrifying effect. Some of the newcomers met old friends who helped them navigate this seeming netherworld; others were curious and charmed people to get by. Within weeks, the new prisoners started fitting in. The Jewish self-administration assigned them accommodation, food rations, and a job (there was a universal labor duty). Often, the employment was not one that the person desired, yet with their growing knowledge of Theresienstadt, some individuals acquired the connections and persuasive skills they needed to be hired elsewhere. Fear of the Germans was widespread and people heard about executions in the early months. At the same time, they quickly realized that the SS were the controllers, not the managers, of the ghetto. This job the Germans forced on the Jewish functionaries. Weeks would pass without a detainee even seeing a Nazi.

Settling in was particularly hard for older prisoners. They received the worst accommodation and food rations, and this detrimental treatment was reflected in high death rates. They nevertheless fought to stay alive and embraced the ghetto with curiosity rather than horror. Some seniors described their lodgings as “The Lower Depths”, a reference to Gorky’s play of the same name. They shared stories about the places they came from, about their former positions of power, which they sometimes exaggerated, and at other times they laughed. A famous joke went: “A dachshund in Terezín says: back in the day I was a St Bernard in Prague!”

The society of the Theresienstadt ghetto reflected and engendered class differences. Stratification was expressed not only in access to material resources (food, accommodation, and protection from transports to the East), but also in status and prestige. For instance, bakers, butchers, and cooks were considered the best positions, not least because of their access to food (they received extra rations to discourage theft). In addition, among those assigned to these professions were the 1,342 men who had arrived on the two construction detail transports to set up the first barracks for the thousands who arrived after them and were thus considered particularly deserving. The SS promised these men protection from further transports, which was extended to their immediate families. Unsurprisingly, these young men became much sought-after for marriageable women in the camp and their privileges elevated them to the position of a social elite.

When the young Arnošt Reiser visited his attractive friend Lilly, he found her living in her own room with her boyfriend, a member of the construction detail, who was smoking a cigarette. Smoking was prohibited in Theresienstadt, and the SS imposed draconic punishments if anyone was caught with cigarettes. They were smuggled in by Czech gendarmes and sold for about 8 Reichsmark (RM) apiece. A loaf of bread was sold for about 40 RM on the ghetto black market. A cigarette was an expensive treat.

To our eyes, social differences in Theresienstadt may appear minimal—whether one slept in a crowded room or had a tiny room of their own. But if we want to understand the experience of the ghetto prisoners, we need to discern their choices and take them seriously, whether it was a decision over whom to share dinner with or join on a transport to the East. This was the agency that Holocaust victims had, and it was immensely important to them.

Camp society during the Holocaust was one of the many versions of what human society can be. It was neither just nor equal (despite often being remembered and depicted in historiography as such). Nor should analyzing social difference within the camp gloss over the fact that it was the German state that did the work of organizing and implementing genocide. The Jews in Terezín behaved like people always do: they created distinctions and made friends, fought for resources and shared them with their loved ones. The ways in which they expressed their social ties was sometimes different to our “normal world.” Interrogating the operation of class in the ghetto gives complexity to a place usually narrated in sentimental clichés. Even more importantly, it brings agency and individuality back to the people of whom we otherwise only know that they were slaughtered.

Anna Hájková is Associate Professor of Modern European Continental History at the University of Warwick. She regularly contributes to mass media in English, German, and Czech in the publications Haaretz, Süddeutsche Zeitung, Tablet, and Tagespiegel. She holds a Ph.D. from the University of Toronto. She is the author of The Last Ghetto: An Everyday History o Theresienstadt published by Oxford University Press in 2020.