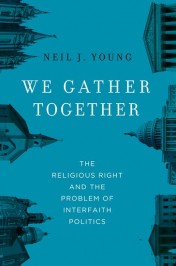 We Gather Together: The Religious Right and the Problem of Interfaith Politics

What led you to this particular field of study?

Although I went to graduate school to focus on nineteenth-century Southern history, I unexpectedly turned my attention to twentieth-century American politics and religion. This was during the years of George W. Bush’s presidency and many academics, especially historians, were struggling to understand the prominence of religious conservatism in American politics. I read a lot of scholarly works that argued the Religious Right formed in response to Roe v. Wade’s federal legalization of abortion in 1973. They also argued that the Religious Right had succeeded in large part because evangelicals and Catholics had set aside their longstanding theological differences and historical animosities in order to become political allies. This explanation didn’t seem right to me for a number of reasons, so I set out to understand the relationship among evangelicals, Catholics, and Mormons (the three pillars of the Christian Right) and how these relationships ultimately shaped the formation, success, and failures of the Religious Right.

Yes, while many writers have acknowledged the importance of Mormons in the emergence of the Religious Right, most books still have concentrated on only Catholics and evangelicals. But Mormons deserve to be at the center of our narrative about the rise of the Religious Right because they have been such prominent political actors all along. In the 1970s, the LDS Church played a huge role in defeating the Equal Rights Amendment. Additionally, the LDS Church has spearheaded efforts against gay rights from the 1970s to the more recent Proposition 8 controversy in California. In the Religious Right’s current focus on matters of religious liberty, Mormons have emerged as one of the most vocal defenders of religious freedom. All of this points to the central role of Mormons in the Religious Right, but, as my book shows, that has not been without controversy since most evangelicals do not believe Mormons subscribe to traditional beliefs of orthodox Christianity.

What do you think readers will find surprising about your book?

Many things, I hope! For one, I think readers will be surprised about how many internal disagreements there have been among religious conservatives on political matters. As I show, while conservative evangelicals, Catholics, and Mormons have opposed abortion rights, for example, they have had a hard time agreeing about the right political actions and legislative options for seeing abortion outlawed federally. With other issues like national defense and economic matters, I think readers will be surprised to discover how far apart religious conservatives were on a lot of these questions.

Additionally, readers will be surprised to learn how much diversity there is within the evangelical movement, both religiously and politically. Our media coverage especially tends to treat evangelicals as a rather monolithic and homogenous group, but my book shows the wide-ranging nature of modern American evangelicalism and how that has shaped the nation’s religious landscape and also its political climate.

What was the Religious Right’s relationship with Ronald Reagan?

It was a tricky one. Religious conservatives saw Reagan as no less than a political godsend, pun intended. After years of feeling ignored and marginalized, religious conservatives believed that a Reagan presidency would validate their social and political beliefs and turn the nation back to God. Reagan appealed to the Religious Right by emphasizing his personal faith and speaking in religious language, but also by promising to act on their most important political causes, particularly school prayer and abortion. But once in office, Reagan failed to deliver on these issues much to the dismay of religious conservatives. In response, many of them threatened to not support Reagan’s re-election efforts in 1984. (The Reagan Library is filled with many angry letters from disgruntled religious conservatives from throughout his presidency.) Ultimately, the Religious Right stuck with Reagan, but many of them felt even more disappointed by Reagan’s second term. As one Religious Right leader asked at the end of Reagan’s presidency, “Were Christians courted for their votes or their beliefs?” Most of this history has been forgotten or perhaps even deliberately repressed for political reasons, but my book shows how messy things often were between the Reagan administration and the Religious Right and the political consequences of that often-strained relationship.

Do you have a favorite chapter of your book?

That’s hard to say – it feels a bit like picking a favorite child! But I especially enjoyed writing chapters 2 and 6. Chapter 2 deals with the Catholic Church’s reform of itself through the Second Vatican Council (1962-1965) and evangelical and Mormon reactions. I was surprised by how deeply and thoughtfully evangelical and Mormon leaders responded to Vatican II and what it revealed about their thoughts on the Catholic Church and their larger ideas about the nature of Christianity. In Chapter 6, I focus on changing relationships among evangelicals, fundamentalists, Catholics, and Mormons in the 1980s. We see this decade as a great moment for religious conservatism, but what my chapter shows is that the Reagan years actually produced great concern among many conservative Christians that the “Religious Right” was overshadowing important theological differences among them. This produced some important conversations between leading evangelical and Catholic figures on the one hand, but also led to other results like the creation of the virulently anti-Mormon “documentary,” The God Makers, that became wildly popular among evangelicals in the 1980s.

Essentially, I’m most drawn to the parts of my book where I closely examine the ever-changing relationships among Mormons, Catholics, and evangelicals and how this shaped the rise of the Religious Right and transformed American politics. I think the religious history of the Religious Right has been largely overshadowed by focusing so much on its political accomplishments. My book argues that we can only understand those political changes by examining the larger religious history that helped bring them about.

Neil J. Young is a historian and independent scholar in New York City. He previously taught at Princeton University. Young holds a B.A. from Duke University and a Ph.D. in U.S. history from Columbia University. His articles have appeared in American Quarterly, the Journal of Policy History, the New York Times, Slate, Huffington Post, and the Christian Science Monitor. He is the author of We Gather Together: The Religious Right and the Problem of Interfaith Politics.