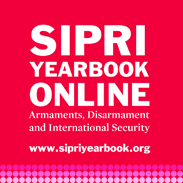 SIPRI Yearbook Online makes editions of the Yearbook from 2010 to 2015 available through a single, searchable, online library.

What was happening in the world last year? Events such as the the devastating protest-turned-conflict in Ukraine, or the maritime disputes between states in the South China Sea, have wide-reaching repercussions – from the amount a country spends on its military, to the direction of foreign policies whole regions take. The SIPRI Yearbook, published annually in print and online, keeps track of global developments which happened in the previous year and provides authoritative data and expert analysis on the most important issues facing the global community, offering a deeper and more nuanced understanding of the headlines you’ve been reading in the past year.

Did you know, for example, that Sweden became the first EU state to recognize Palestine as a sovereign country? In response, Israel recalled its Swedish ambassador in October 2014. Or that Africa continued to be the main focus of peace operations in 2014, with almost half of global peace operations taking place on the continent?

With snippets taken from the SIPRI Yearbook 2015, which analyses significant events across the globe in the previous year, the map below helps you explore the global state of affairs in 2014:

Featured image credit: Berkut Riot Police by the Cabinet of Ministers of the Ukraine by Ivan Bandura. CC BY 2.0 via Wikimedia Commons