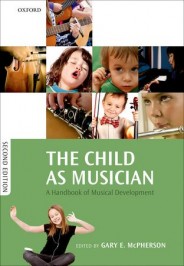 The Child as Musician: A Handbook of Musical Development

Every day after school, eager children cross the doorstep of a suburban Melbourne house. It’s the home of Daphne Proietto, an exceptional piano teacher who gives lessons to children six days a week, entirely pro bono. While some kids would be more inclined to see piano lessons as a chore, these kids can’t wait. The reason? Music for them is more than just an activity; for many of them, it’s their language. As you may have guessed, the students of this particular piano teacher are not your average students; they have autism, and Daphne is using the repetitive nature of music to provide them with a way of communicating that makes more sense to them than the confusion many experience when faced with language.

Interviewed as part of a 60 Minutes report for Australia’s Channel 9, University of Roehampton professor Adam Ockelford gave the following explanation: “Language is inconsistent, and what an autistic child really wants is complete consistency. And what you get with music if you play a C on a keyboard, it’s always going to be the same. I think that predictability is a really key thing for autistic children.” While many of Daphne’s students have little or no speech, and others struggle with the emotional contents of words and their implied meanings, the abstract quality of music is, in contrast, highly appealing. Music as an ordered and consistent system provides them with a highly structured means of communication. What’s more, as Professor Ockelford suggests, “Music is like the language of play. It doesn’t tell you to do anything…. It just is.”

Autism has no cure, but many high functioning adults on the autism spectrum would point to historical figures such as Mozart, Tesla, Einstein, and Lewis Carroll as a justification for the need to embrace eccentric minds as gems of our society. Whether the reason behind the quirks and unconventionalities of these and other innovators is autism or not, what is evident is that unique perspectives are behind some of the world’s greatest advances.

That being said, there are many children with autism who struggle to communicate with language, and have severely stunted social skills. For these children, differing educational programs have been developed in the hope of enhancing their quality of life. While the positive effects of these programs are undeniable, there is an almost incomprehensible omission of music from these programs. This remains an unjustifiable hole in mainstream therapeutic programs that desperately needs to be filled.

Music is important to all children with autism, but especially to a particular subgroup of children on the autism spectrum who exhibit an ability known as absolute pitch: the ability to identify a note without any prior hearing of a note to work from. One in twenty children with autism is thought to have this ability, which is about 500 times more often than in the general population. For these children, music provides them with a consistent and familiar landscape in an otherwise confusing world. So let’s go back to Daphne and her exceptional group of students. Perhaps not surprisingly – even if no less exceptional – all of Daphne’s students have absolute pitch. For them, individual notes are remarkably familiar, and can elicit a high level of emotional arousal in a way that is uncommon for most of us.

Neuroimaging research has shown us that music and language are closely linked in the brain, so it’s not difficult to understand why some children’s language ability does improve through musical training. But perhaps even more importantly for them and their families, music can help build these children’s confidence and self-esteem — something that is so very clear when observing the transformation that many of Daphne’s students have gone through. As Professor Ockelford aptly describes, “Music to me is like a core curriculum for children with autism, because without music we couldn’t learn to speak, without music we couldn’t learn to socialize, and it’s absolutely a key facet in their life that generally tends to be underrated.” Daphne’s students are incredibly lucky to have found a teacher that not only understands the transformative effect of music in their lives, but also is willing to offer it to them with such generosity. How many other children with special needs are missing out on the benefits of a musical education? The answer to that question is, simply, too many.

Solange Glasser, the author of this blog, works as an editorial assistant for Professor Gary McPherson, on his book, The Child as Musician. Gary McPherson is the Ormond Professor and Director of the Melbourne Conservatorium of Music at the University of Melbourne. He has served as National President of the Australian Society for Music Education and President of the International Society for Music Education. His research examines the acquisition and development of musical competence, and motivation to engage and participate in music from novice to expert levels. He is particularly interested in the acquisition of visual, aural and creative performance skills, and the question of how music students become sufficiently motivated and self-regulated to achieve at the highest level.