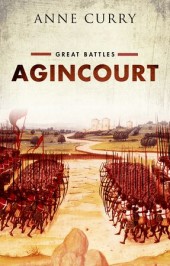 In the six hundred years since it was fought the battle of Agincourt has become an exceptionally famous one, which has generated a huge and enduring cultural legacy. Everybody thinks they know what the battle was about but is the Agincourt of popular image the real Agincourt, or is our idea of the battle simply taken from Shakespeare’s famous depiction of it? Anne Curry explores the legacy of the battle through the centuries from 1415 to 2015. The following is an extract describing some of the literary interpretations and depictions of Agincourt.

The inspiration of Agincourt on literary creativity in England did not end with Drayton’s ‘Ballad of Agincourt’ (c. 1606)]. In 1819 another long poem was written, The Lay of Agincourt, presented as if a genuine ballad of the period. The reviewer in the Leeds Mercury on 31 July certainly thought it gave ‘an accurate description of that celebrated battle’. Its ‘author’ was a wandering minstrel who came to Ewood Hall near Halifax. The owner of the hall, Lord Clifford, identified him as the Master Bard Llewellin, recalling that he had heard him at Windsor in the presence of the late king (i.e. Henry V), his nobles and beauties, where he ‘tore our spirits with the lay of Agincourt’s embattled day’. Offered an opportunity to reprise his poem, the Bard claimed to speak from bitter experience since the French had captured him, but he had known how to retaliate:

Shakespeare is a major influence on the poem both in Henry’s wanderings around the camp and his pre-battle speech. The French spend the night carousing: ‘Already in their feasting eye | They see the redcross prostrate lie.’ New stories are introduced. The sire de Dampierre had given his gauntlet to Lord Willoughby at the surrender of Harfleur: they meet again at the battle. Davy Gam and two other Welsh came to defend the king. The Bard invokes the aid of St David. The choice of a Welsh bard as narrator may have contributed to the idea of major Welsh involvement in the battle. That said, there is also emphasis on English success. The contrived poem omits the killing of the prisoners completely.

Over the nineteenth and twentieth centuries many novels for adults and children have taken Agincourt as their theme. G. P. R. James’s Agincourt (1844) was not deemed amongst the best of his works, according to The Spectator of 23 November of that year, but it set the tone for a romantic as well as heroic approach. Like several subsequent works it followed the fortunes of English participants as they joined the army and journeyed to France, mixing fictional and real characters and ensuring there was love interest. A similar approach colours Katherine Phipps’s The Sword of De Bardwell: A Tale of Agincourt (1881). G. A. Henty’s At Agincourt: A Tale of the White Hoods of Paris (1897) was in the swashbuckling mode of his other adventure stories. Over his eighty or so books, Henty sought to recall British war successes from the Norman Conquest onwards, aimed at inculcating manliness in the teenage boy. His hero of Agincourt, Guy Aylmer, was aged 16. Henty’s works were very popular, selling 25 million copies by 1914.The teenage archer hero—usually Welsh—has been a common feature in twenty-first-century works.

Bernard Cornwell’s Azincourt (2008) also follows the fortunes of an archer, although this time an Englishman, Nicholas Hook. Cornwell took the name and those of other archers from the campaign lists presented in my Agincourt: A New History, but the French girlfriend is invented. Modern taste is reflected by the greater role assigned to women in this previously ‘boy’s own’ world. Martha Rofheart’s Cry God for Harry (1972) has some chapters narrated by women. The Agincourt Bride of Joanna Hickson (2012) (‘Her beauty fuelled a war. Her courage captured a king’) also has a female narrator and views the battle through news brought to Princess Catherine. In Laurel O’Donnell’s The Angel and the Prince (2014), the heroine voices concerns about the forthcoming battle but takes things into her own hands by dressing as a knight to fight. Perhaps because of the dominance of Shakespeare’s Henry V, there has been no attempt as yet to produce a film which does not use his play, but there has been talk of Cornwell’s novel reaching the screen. To date, no Dr Who episode has been situated at the battle but the Doctor was there: in ‘Talons of Wen Chiang’ (1976, part 5) he tells his companion, ‘It’s the wrong time my dear, you’d have loved Agincourt’. To fill the gap, a story has been written. The Doctor’s granddaughter Susan is disguised as Simon, a page: it is her task to distract Henry V from the rockets the Doctor is launching to make the rain fall. We now know the reason for the English victory!

Anne Curry is Professor of Medieval History and Dean of the Faculty of Humanities at the University of Southampton, after teaching for many years at the University of Reading. She has published many books and articles on the Hundred Years War, as well as definitive works on Agincourt itself and an on-line database of all known soldiers between 1369 and 1453. A historical advisor to the battlefield centres at Azincourt, Shrewsbury, and Bosworth, she is co-chair of the 'Agincourt 600' committee, tasked with organizing the commemorations of the sixth hundredth anniversary of the battle. President of the Historical Association between 2008 and 2011, she is also a former Vice-President of the Royal Historical Society. Her latest book is Agincourt (OUP, 2015).