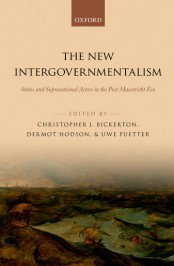 The New Intergovernmentalism: States and Supranational Actors in the Post-Maastricht Era

Just as some thought it was over, the Greek crisis has entered into a new and dramatic stage. The Prime Minister, Alexis Tsipras, has declared snap elections to be held on the 20 September 2015. This comes just as the European Stability Mechanism had transferred 13 billion Euros to Athens, out of which 3.2 billion was immediately sent to the European Central Bank to repay a bond of that amount due on the 20 August. Tsipras has calculated that with public backing for the third bail-out, he can use the election to rid himself of the Left Platform faction within Syriza, which has been vigorously opposing the bail-out deal. He can then recast himself as a more centrist figure, whilst Left Platform re-launches itself as an anti-austerity, anti-bailout party.

The first is an explanation for Syriza’s failed attempt at renegotiation with the Troika. There is still some hope of debt relief for Greece but almost all of what Tsipras had promised to achieve when he was elected in January this year has been left by the wayside. The key reason for this failure is that both Tsipras and Yanis Varoufakis, the former finance minister, wildly over-estimated the appetite in Europe for more supranational integration. They came to the negotiations with the view that – in the name of a more solidaristic European Union – they might convince creditors to ease the burden on Greece. They argued that the crisis in Greece was not only the result of Greek profligacy; other member states, and especially those with banks that had lent to Greece in the boom years, needed to shoulder some of the blame. Sharing the blame, sharing the burden, and recasting Europe as a more socially-minded and integrated political community: this was the hopeful message of Syriza.

It fell on deaf ears, to say the least. Mildly supportive remarks early on from the likes of François Hollande and Matteo Renzi were soon drowned out by more hostile demands that Greece toe the line and pay back all its borrowed Euros. Underlying resistance to the Greek message was a refusal to accept its supranational implications. The new integovermentalism argues that post-Maastricht European integration is based on an “integration paradox”: a significant expansion in the scope and depth of EU integration but without definitive and lasting transfers of powers from national governments to supranational EU institution. This paradox fits with the Greek bail-out deal. EU integration has moved forward as instruments – such as the ESM – are strengthened and new ones are created. But there is no heady flight towards fiscal union or any real burden-sharing. The language of European responsibility and solidarity deployed by Syriza is empty rhetoric, unmatched by any political wish or will on the part of the EU’s member states.

Another insight the new intergovernmentalism provides is about why – in the course of the last six to eight months – Yanis Varoufakis became a persona non grata. Appointed finance minister after the January elections, Varoufakis toured European capitals in an attempt to drum up support for his plan for reforming the Eurozone. He attended all the Eurogroup meetings, making the same case behind closed doors that he was making to newspapers, blogs and anyone who would listen. He was described by his admirers as charismatic and handsome and was probably the only Eurozone finance minister to have his own (shortlived) Tumblr account created by his fans, entitled ‘Varoufakis Doing Things’.

For all his efforts, Varoufakis became in the space of just a few months public enemy number one for the Eurogroup. He was first side-lined by Tsipras as a condition for the continuation of talks between Greece and its creditors. He then resigned of his own accord, though it was clear he would have been kicked out had he not gone first. Why did Eurogroup finance ministers end up hating Varoufakis so much? Some of the explanation probably lies in the patronising tones he used to address his political peers. He saw the whole enterprise as an intellectual activity where the most logically consistent argument wins and there was no doubt he thought his argument was superior to all others. Being lectured by Varoufakis about economics and being asked to hand-over billions of Euros in loans at the same time was too much for people like Schäuble.

A more likely explanation is that Varoufakis openly flouted the guiding norms of the Eurogroup. As argued by the new intergovernmentalist framework, deliberation and consensus have become the key norms of day-to-day decision-making at all levels of EU policymaking including the Eurogroup. As norms, deliberation and consensus are not necessarily democratic; that depends on the wider institutional setting. The Eurogroup is a closed and private body, with no real legal status in the EU’s treaties. Its deliberative and consensual nature is far-removed from Varoufakis’ notion of presenting demands on the behalf of the Greek people. Acting as an open and unabashed representative of his own people, Varoufakis exposed the Eurogroup’s democratic failings and the other members could not forgive him for it. He had to go.

A final insight provided by the new intergovernmentalism is to do with the febrile nature of Greek politics. It is striking that Tsipras, though elected according to all the procedures of party government in Greece, has understood his power in a plebiscitarian way and has sought to renew his mandate at every critical juncture in the negotiations with the Troika. Greek party government is in crisis. The governing parties of Pasok and New Democracy have been either swept away or fatally weakened by their association with the boom and bust of the last decade. What remains are the margins – Syriza, Independent Greeks – that have sought to govern but have done so very conscious of their own weakness. This is why Tsipras has needed to renew his mandate through referenda so often. The new intergovernmentalism tells us that these problems in domestic preference formation – i.e. crises in the political system itself, in the very means by which interests are aggregated together – have become a standalone input into European integration. The EU cannot shield itself from the challenges faced by party government across Europe today. In fact, these challenges have become a constitutive part of the EU integration process itself.

Headline image credit: “We Remain in Europe I” by alk_is. CC BY 2.0 via Flickr.

Chris Bickerton is co-editor of a book just published with Oxford University Press, called The New Intergovernmentalism: States and Supranational Actors in the Post-Maastricht Era.