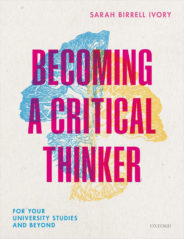 Becoming a Critical Thinker: For your university studies and beyond

“It was the best of times, it was the worst of times.” Said by Dickens many years ago but with eerie relevance to our current situation.

The global pandemic is itself an overwhelming health tragedy. Moreover, it has laid bare so many other local, national, and global issues that have been simmering beneath the surface. To name but a few: health systems that treat the sick—if they can afford it—rather than social systems that maintain and promote health; online communities that replace a sense of local community, but lead to isolation, loneliness, and associated mental health impacts; food systems that embrace mass-grown, cheap, convenient, often carbon-intensive, and always-available products, with local producers, biodiversity, climate stability, and sometimes even nutrition suffering.

So what makes it the best of times?

For some, the pandemic has allowed a moments’ pause. Those of us in the UK have clapped for a health system—and the people who comprise it—which is blind to wealth. Communities rallied around those vulnerable or being shielded with some talking to neighbours for the first time. Local food suppliers became heroes and saviours, and supermarket workers became essential workers, valued for their contribution to our daily survival. But these “best of times” moments feel fleeting, and are fading, as they were always going to, as the economic impact of the pandemic starts to emerge, augmenting the already unequal societies and communities, who have never overcome the disadvantages of poverty, race, country of birth, or access to resources: more bubbles simmering beneath the surface that were always going to break through, at some point.

And into this maelstrom, we see a generation of young adults taking their places at university, many for the first time. And I hear those in my generation saying, “I feel so sorry for students starting university during Covid—their experience will be completely different.”

Do I feel sorry for these young adults?

Yes, and also no.

I suspect these comments are linked to regrets that these young adults won’t experience the quintessential university “freshers” week and first year of socialising, drinking, experimenting with new identities, and new relationships. But this already wasn’t the experience of so many for whom university was—and is—a serious opportunity to make a better life for themselves and their families. Individuals for whom education is a gateway to a better future, rather than a venue for socialising and drinking. That issue of a better future, I’ll come back to.

But also, this is not the first—and certainly won’t be the last—generation of students to start university in times of great societal upheaval. Here at the University of Edinburgh we talk about this not being our first plague, as we work to maintain access to university education for all, made possible for the first time in history, because of the technology we can leverage. In the 1600s, a number of universities closed due to plague, and students were sent home with just books to read and questions to think about. And while Newton may have used the time productively, how many other students struggled without formal instruction? But we don’t even have to look that far into history.

At the moment I’m reading about The Philosopher Queens (Buxton and Whiting, 2020) Iris Murdoch, Mary Midgely, Philippa Foot, Mary Warnock, and Elizabeth Anscombe who were given the opportunity to study—and come of age—as philosophy students in the 1940s because so many of the young men were away at war—and many never returned. A tainted silver lining of the “golden age of female philosophy” (Buxton and Whiting, 2020, p. 105) made possible by a continent ripped apart, mass genocide based on race and religion, and a generation of young men never to return to their homes.

Even more recently, my own Australian father remembers vividly the moment his date of birth, 11 January, was literally pulled from a barrel, and all men born on that day 18 years previously won the dubious prize of being conscripted to fight in a war he knew nothing about, against an enemy he didn’t understand, in a country he had barely heard of: Vietnam. Given a temporary reprieve because he had a scholarship to attend university—the first in his family ever to do so—he watched as his school mates were shipped out. He studied his whole degree with a black cloud over him: once his degree was awarded, if he passed his army medical, it may all be for nothing if he was dropped with a machine gun into a jungle. He remembers attending that medical, surrounded by young men inducing vomiting to try to be deemed medically unfit, while his own terrible eyesight was literally what saved his life. And as he left that hall, he passed other young men walking, hand in hand, up to the army officers and turning to each other to share a kiss. Another tainted silver lining: being ostracised from society simply because of who you loved but using that as a shield to be deemed unworthy for army service.

I do feel for our current generation, but not because of the constraints on their pub nights and socialising, or because this is the first generation to ever face such hardship. I feel sorry for them because of the world they are inheriting, because of how much weight and responsibility we are placing on their shoulders, because of the serious societal issues that we have at best been ignorant of and at worst have wilfully ignored. Political dissent resulting in torture? Not a history lesson from WW2, but a news story in Europe today. Accusations of voter suppression and electoral fraud? Not a dictatorial regime in a developing nation, but the world’s “greatest democracy.” Lack of educational attainment due to socioeconomic deprivation? Again, not a developing nation but an ongoing and persistent story here in my own home in the UK, made even more heart breaking as an algorithm exacerbated that disadvantage. And I haven’t even mentioned the looming ecological crisis with climate change, biodiversity loss, and sea-level rise changing the way humans live on this earth for ever and catastrophically if we don’t act immediately to prevent widespread ecosystem breakdown. This is what they will inherit. As Greta Thunberg asks: how dare we?

While this sounds pessimistic, I have optimism also. And that optimism comes from those same students others deign to feel sorry for because my career gives me the privilege of working with bright, enthusiastic, socially-aware, environmentally-conscious, hard-working, and aspirational university students. For many years this was mostly with postgraduates, who elected to do my courses in sustainability and climate change because of their interest. But four years ago my Dean asked me to be ambitious and aspirational in designing a new first year compulsory course, for our undergraduate students. One of the visions of such a course was to help them transition into university, so that they could make the most of the opportunity, and then more successfully transition out into their graduate lives. My course, Global Challenges for Business, lays a foundation for the global context of their chosen discipline—business studies. But while my students enjoy exploring the social, digital, and environmental disruptions which are challenges for business, it is the skills and transition element of the course that has been transformational.

I realised early on that I was expecting these young adults to move away from the “learn and repeat” approach of school-based learning, and to think by and for themselves. And yet I could find no effective resources to help with this practical approach to critical thinking. Most urgently, I needed them to understand that not only did they have permission to think for themselves, but that that is precisely what university education is for. That is, they needed to understand why they were at university. Moreover, they needed a structure to understand the aims of critical thinking: of developing quality arguments with logical reasoning, of supporting this with strong, reliable evidence, and of communicating this clearly for their own purposes and to engage with others. And finally, no one I could find was explicitly teaching students how to master the tools of such an approach to thinking. The tools we can use and improve to understand and interpret others’ voices (through active reading and active listening), and to develop and express our own voices (through speaking-to-think and writing-to-think). In teaching my students in this way, I achieve a transformation from bright but passive consumers of knowledge, to engaged and inspired creators of knowledge.

Because if we can pass on one thing to support young adults as they face the world they will inherit from us, it is to help them become critical thinkers: to understand the problems and develop workable solutions. And by doing that, we won’t have to feel sorry for them. We will feel proud of the future citizens we have helped to create.

Dr Sarah Birrell Ivory is a Lecturer in Climate Change and Business Strategy at the University of Edinburgh Business School (UEBS). Dr Ivory established the undergraduate Global Challenges for Business course, which in 2019 won one of the prestigious Aspen Institute's 'Ideas Worth Teaching' awards. This course is centred around critical thinking, understood through the lens of global challenges. Dr Ivory has taken this award-winning approach to offer students and educators a fresh way of learning and teaching critical thinking. In addition, Dr Ivory is Director of the Centre for Business, Climate Change and Sustainability (B-CCaS) and has an established research career in sustainability, social enterprise, and critical thinking pedagogy. In the past, Dr Ivory has taught study skills for business, strategy, organisational behaviour, leadership, sustainability, and climate and environmental policy.