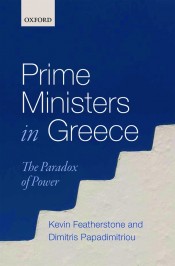 Prime Ministers in Greece: The Paradox of Power

Why doesn’t Greece reform? Over the past few years the inability of successive Greek governments to deliver on the demands of international creditors has been a key feature of Greece’s bailout drama. Frustrated observers have pointed to various pathologies of the Greek political system to explain this underperformance: the lack of political will; entrenched sectoral interests resisting change; and the irrational allocation of resources skewed by clientelism and corruption. There is, of course, a significant element of truth in all these assertions. Yet, for many outsiders the real elephant in the room remains unnoticed. The endemic weaknesses of the Greek public administration are indeed crucial in understanding much of what has gone wrong over the past 5 years (and before). Back in 2010 the beleaguered Greek government had very little input into its own ‘rescue’. Lacking basic capabilities and running out of time, it almost entirely ‘sub-contracted’ the design of the bailout programme to the IMF, who, by its own admission, grossly overrestimated the capacity of the domestic system to deliver. Unrealistic expectations were built on the assumption that an F1 driver will steer a Ferrari to perfection. In reality, it wasn’t a Ferrari but a rusty Trabant.

Since then there has been a depressing list of blunders that has exposed both the limits of Greece’s governability and the naivety of its creditors. Privatisation targets (set at 50 billion Euros) were pulled out of thin air, only to be discovered that many state assets were marred by legal uncertainties and bureaucratic blockages which greatly diminish their value. Some of the pension and salary cuts (particularly in the public sector) were so poorly implemented that their legality was subsequently challenged in court, resulting in huge bills for the Greek treasury. The control of central government over the finances (and staffing practices) of local authorities still remains sketchy. More worryingly the quality of the legislative process in the Greek Parliament has suffered greatly under the suffocating deadlines of ‘prior actions’ that accompany the release of funds by Greece’s creditors.

Whilst in they were in opposition, the current governing parties in Greece accused their predecessors of turning the Greek Parliament into a ‘sausage machine’ of bailout laws at the request of the ‘Troika’ of creditor institutions. Now in power, SYRIZA’s leader Alexis Tsipras is facing a similar criticism. His ‘in-principle’ agreement for a third bailout was debated in Parliament for less than a day and all ‘prior actions’ demanded by the creditors were fast-tracked within two weeks.

The PM’s current predicament, like that of his predecessors, reflects deep-rooted weaknesses at the very heart of the Greek ‘core executive’. Despite the fact that a prime minister in Greece possesses formal, constitutional powers that are amongst the strongest in Europe, the centre of government lacks the appropriate resources to coordinate ministry ‘silos’ that operate with a significant degree of autonomy. We explore this discrepancy, the paradox of power between formal strength and operational weakness, in more detail in our latest book. The Greek PM does not have at his disposal a permanent bureaucracy (a ‘Cabinet Office‘) for the coordination of government business. Instead, he is surrounded by political appointees and the operational norms are ones of trust and personal, particularistic contacts, in a setting that lacks effective process and is hopelessly disconnected with the wider public administration. The ‘system’ is devoid of institutional memory and is designed for the short term; rather than the control, coordination and accountability of substantive reform programmes.

All of this conspires to create a false sense of ‘security’ for the Greek Prime Minister. With no mandarins and no bureaucratic gate keepers to contend with, the PM faces few formal barriers on how to exercise his authority. But, in reality, ‘the emperor has no clothes’: he lacks effective systems of management across a public administration that is overly-rigid, has poor skills and technologies, is sometimes corrupt, and whose resources are distributed following political logics of clientelism rather than bureaucratic efficiency. Altogether, the PM sits astride a system of governance that has many dysfunctionalities.

There are important lessons here, for both Greece’s leaders, but also its lenders. Greek prime ministers are apt to discover the limits of their operational capabilities. Greece’s creditors – and the European Union, in particular – are faced with the challenge of how to deal with a partner that lacks the capacity to deliver, even if the political will to do so exists. The book offers the first extensive study of how Greece is governed from the ‘inside’ and is based on extensive interviews and archival materials. It asks a fundamental question in the Greek case – how can a PM establish control and coordination across his government – but the answer has implications of international significance.

Kevin Featherstone is the Eleftherios Venizelos Professor of Contemporary Greek Studies and the Director of the Hellenic Observatory at the London School of Economics. Dimitris Papadimitriou is Professor of Politics at the University of Manchester and the Director of the Manchester Jean Monnet Centre of Excellence. They are the authors of Prime Ministers in Greece: The Paradox of Power (OUP, 2015).