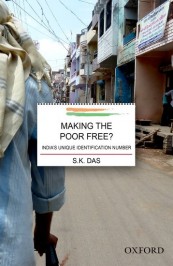 Perhaps you are on your way to an enrollment center to be photographed, your irises to be screened, and your fingerprints to be recorded. Perhaps, you are already cursing the guys in the Unique Identification Authority of India (UIDAI) for making you sweat it out in a long line. That’s why I want to tell you what these guys really do.

Let me begin with some numbers. The UIDAI claims it will assign a number to half of India’s population by 2015: 600 million Indians to be photographed; 1.2 billion irises to be screened; six billion fingerprints to be collected; and 600 million addresses and other personal particulars to be gathered and brought on record.

When the 600 millionth individual is given her number, the UIDAI system will compare it with 599,999,999 photographs, 1,119,999,998 irises, and 12,999,999,999 fingerprints to make sure that the number being assigned is indeed unique. When in full flow, and right now, it is in full flow, the UIDAI system is adding a million names to its database every single day until the task is completed. No system in the world has handled anything on a mind-boggling scale like this.

You may well ask: what’s wrong with photo identity cards, PINs, or passwords as identifiers? Photographs turn yellow with age, and PINs and password may be forfeited, forgotten or lost, but the body can always provide an unfailing link between the record and the person. The UIDAI system uses biometrics, a far more potent marker. The beauty of biometrics is that it is able to find an anchor for identity in the human body to which data and information can be fixed, so that the biometric identifier becomes the access gateway to the data field.

The UIDAI gives a 12-digit number after receiving and verifying biometric and demographic information. It sends the number along with other information to its central server for verification. The server verifies whether the data sent matches your identity and confirms ‘who you say you are’. Sometimes, funny things happen when the numbers are issued. A unique identification number card was issued in the name of a coriander plant with the photograph of a mobile phone fixed on it. The officials have absolutely no clue of the address to which the card has to be delivered.

Perhaps, the question that is foremost in your mind is: what will the number do for you? Well, if you are below the poverty line, the UIDAI says it is going to do wonders for you. All the subsidies that the government gives to the poor (most subsidies do not reach the poor because the delivery system is so leaky) will now be delivered directly to their doorstep, thanks to the unique identification number.

The unique identification number will make financial inclusion possible for the poor by bringing them benefits directly in cash and giving them the wherewithal for being consumers of the market. The market, by offering a choice of goods, services, experiences, and lifestyles, will enable the poor to define who they are or want to be. They will be free to live their lives in terms of choice and freedom. So, through the unique identification number programme, the government will make the poor free.

If you haven’t got hold of a magic number, please do hurry. You can’t afford to be left out of the bonanza, can you?