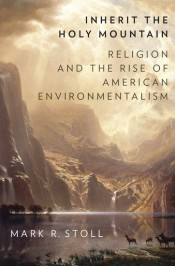 John Muir practically glowed with divine light in the early 1870s. “We almost thought he was Jesus Christ,” the landscape painter William Keith exclaimed to an interviewer. “We fairly worshipped him!” Muir’s sister told him, “For so long a time we considered you the grand exception to the curse, standing as you do on a higher plane, cooling your brow in the pure mountain air and feasting your soul on the absorbing study of sweet soothing nature, untrammeled by either the love, or the fear of society and its folly.”

At the peak of his career, the nation knew Muir as a nature writer, advocate of national parks, and founding president of the Sierra Club. But as a young man, Muir was a charismatic prophet of God’s presence in nature who drew artists, scientists, celebrities, and even Ralph Waldo Emerson to his Yosemite cabin door.

No angels sang or wise men with gifts stood at the door when Muir was born on 21 April 1838, in Dunbar, Scotland. The world of his childhood and youth schooled him to be a charismatic preacher of God of the mountains. The Calvinist Church of Scotland was in the midst of a decade of controversy that would split it in two in 1843. Foreign visitors marveled to hear farmers debate fine theological points. Fiery preaching roared from every pulpit.

Muir’s father, Daniel, was thoroughly caught up in the turmoil. A severe economic depression drove the Muirs to move to frontier Wisconsin in 1848, but their dinner table still rang with lively religious conversation and argument. Daniel became a fervent lay preacher.

Emulating the famous naturalist-explorers of his day, in 1867, with a New Testament and John Milton’s Paradise Lost in his pack, Muir walked a thousand miles through Appalachian mountains and Florida swamps, botanizing as he went. His journals record a religious journey as well, from orthodoxy to a passionate appreciation of the world as the work of a loving Creator.

Muir entered Yosemite Valley in 1868 enraptured by divine glory all around him. He stayed for years, preaching his “sermons” full of Biblical, Calvinist, and Miltonic allusions.

“Glaciers made the mountains and ground corn for all the flowers, and the forests of silver fir,” he urged in 1871, “made smooth paths for human feet until the sacred Sierras have become the most approachable of mountains. Glaciers came down from heaven, and they were angels with folded wings, white wings of snowy bloom. … Unvital granite [was] soon carved to beauty. They bared the lordly domes and fashioned the clustering spires; smoothed godlike mountain brows, and shaped lake cups for crystal waters; wove myriads of mazy canyons, and spread them out like lace. They remembered the loudsonged rivers and every tinkling rill. The busy snowflakes saw all the coming flowers, and the grand predestined forests. … Thus labored the willing flake-souls linked in close congregations of ice, breaking rock food for the pines, as a bird crumbles bread for her young, spiced with dust of garnets and zircons and many a nameless gem; and when food was gathered for the forests and all their elected life, when every rock form was finished, every monument raised, the willing messengers, unwearied, unwasted, heard God’s ‘well done’ from heaven calling them back to their homes in the sky.”

In the 1880s, work and family silenced Muir’s prophetic voice. He emerged in the 1890s as victorious political crusader for forest reserves and national parks. By his last years he was friend to presidents and author of many books of his adventures in the wild.

Then a proposal to dam beautiful Hetch Hetchy valley in Yosemite National Park for San Francisco’s water supply again called forth Muir’s righteous preaching. “These temple destroyers, devotees of ravaging commercialism, seem to have a perfect contempt for Nature, and, instead of lifting their eyes to the God of the mountains, lift them to the Almighty Dollar,” he famous cried. “Dam Hetch Hetchy! As well dam for water-tanks the people’s cathedrals and churches, for no holier temple as ever been consecrated by the heart of man.” He preached in vain. The devotees of commercialism built the dam, destroying the temple. A year later, in 1914, Muir died.

Now, over a century after his death, Saint John Muir’s evangelism still echoes for us — in his books, in the “stilly twilight” of a grove of redwoods that bears his name (Muir Woods National Monument), and now in the sanctuary of a church in San Francisco. Today is his birthday, and tomorrow, the 22nd, the Episcopal church celebrates his saint’s day.