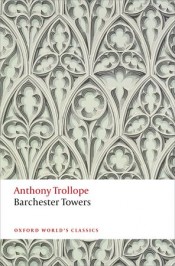 Finding Trollope is one of the great pleasures of life. Unlike other Victorian authors Trollope is little studied in schools, so every reader comes to him by a different path. It might be a recommendation by a friend, listening to a radio adaptation or watching a TV production that leads to the discovery of Trollope and his world.

I stumbled across Trollope in the early 1990s. I had recently graduated, moved to London and found myself working in a bookshop. A new edition of Trollope’s novels had just been published, and it was at the suggestion of the publisher’s rep that I picked up my first Trollope, Barchester Towers.

Over the next few years I would return again and again to Trollope when I was short of something to read. He became my default author. I read the novels in no particular order, just picking them up in bookshops whenever I could find them. I developed a strong relationship with Mr Trollope, his authorial voice connected with me, and his characters seemed so real that I felt that they were alive. At this time I was a lone Trollope. I didn’t know anyone else who read him and the only outlet for my enthusiasm was leaving quotes on friends’ answer machines, ‘nuisance quotes’ they became known as.

This was neither satisfactory for myself, or my friends. What I needed was a community of like-minded enthusiasts, and I found them in The Trollope Society. The first Trollope Society event that I attended was a garden party in Hampshire. I had got it into my head that it was a fancy dress affair, so turned up on a blisteringly hot summer’s day in full nineteenth century clerical garb, complete with gaiters, frock coat and shovel hat, dressed to my mind as the very picture of Archdeacon Grantly. The other members of the society were delighted with my efforts. I was warmly welcomed and mistaken by everyone for Mr Slope.

The Trollope Society is a wonderful institution. It is run by volunteers, who give up their time to run seminar groups up and down the country, to arrange play readings at the Royal Opera House, or plan trips to Ireland, Scotland or anywhere with a Trollope connection. We plan parties, lectures, dinners and holidays, and at the heart of it all is a love of reading Trollope.

We have over the last few years been planning celebrations for Trollope’s 200th anniversary in 2015. In February we launched the bicentenary with an international balloon race, ‘The Great Barsetshire Balloonathon’, with balloons released in London, New York, California, Belgium, Australia, and Japan. As we approach the date of Trollope’s birth, 24 April, things are reaching fever pitch. The British Library is hosting ‘A Celebration of Anthony Trollope’ on 23 April and the society is commemorating the 200th anniversary of Trollope’s birth with a dinner at the Athenæum the following day. Later in the summer the Trollope Society is hosting the Alliance of Literary Societies AGM weekend in York. In August a new play, Lady Anna: All at Sea, commissioned by the society will be performed at The Park Theatre in London. The bicentenary year draws to a close on 4 December with a special Evensong at Westminster Abbey followed by a dinner at the House of Lords.

Aside from these grand celebrations, the aim of the bicentenary year is to get people to pick up a Trollope and give him a go. On 24 April, in partnership with Oxford World’s Classics, we are holding a Book Giving. We are asking anyone who has read Trollope to give a copy of one of his novels to a friend, and asking the recipient to let us know what they think on our Facebook page.

The Society is also holding a Trollope Big Read on Facebook and in our local seminar groups. Starting on 24 April, everyone is encouraged to join in and read Barchester Towers. John Bowen, the editor of the new Oxford World’s Classics edition of the novel, will be joining the Facebook group so we will have expert guidance. If you haven’t yet found Trollope, there’s never been a better time to give him a go!