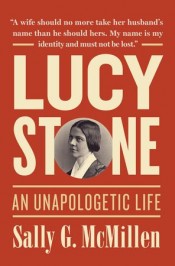 Lucy Stone, a nineteenth-century abolitionist and suffragist, became by the 1850s one of the most famous women in America. She was a brilliant orator, played a leading role in organizing and participating in national women’s rights conventions, served as president of the American Equal Rights Association, co-founded and helped lead the American Woman Suffrage Association, and founded and edited the Woman’s Journal, the most enduring, influential women’s newspaper of its day. Yet history has wrongly slighted her, relegating her to a far less important role than that of Elizabeth Cady Stanton and Susan B. Anthony.

1.   Lucy Stone was the first Massachusetts woman — and one of the first women in the nation — to earn a college degree. Because her father refused to support her dream of attending college, she taught school to earn the money she needed to attend Oberlin Collegiate Institute, the only college at the time that admitted women. Stone graduated in 1847 at the age of twenty-nine.

2.   After college, Stone chose public lecturing as her career, a most unusual profession for a woman at the time. In 1848, the Massachusetts Anti-Slavery Society hired her as a lecturer. She soon added women’s rights to her speeches, defending her choice by insisting, “I was a woman first.” By all accounts, she was a passionate orator. Soon Stone was earning a substantial income and attracting hundreds, sometimes even a few thousand people to her talks.

3.   Public speakers, especially those professing radical ideas such as abolition and women’s rights, faced enormous opposition almost every time they spoke. On stage, Stone was pelted with rotten vegetables and books. Mobs of angry men attended her lectures and tried to drown her out. One night someone stuck a hose through the stage window where Stone was standing and doused her with icy water. A resolute Stone pulled her shawl tighter and kept on talking.

4.   Stone adopted bloomers in the early 1850s. This costume — pantaloons and a knee-length skirt — challenged popular feminine fashion at the time. Stone loved the new outfit and wore it both at home and in public. Crowds were aghast and after three years of criticism, Stone gave up the comfortable costume, though never again did she don corsets and fancy, voluminous dresses.

5.   Stone vowed never to marry because laws at that time made women subordinate to their husbands and removed almost all their rights. But in 1855 after a two-year courtship by Henry Browne Blackwell, she changed her mind. He promised to let her live an independent life. Stone was able to continue her lecturing career and to play a leading role in the women’s movement until the birth of daughter Alice in 1857.

6.   A year after her wedding, Lucy made the radical decision to keep her maiden name, insisting that since a man could keep his last name, so too could a woman. All her life, she was Lucy Stone.

7.   Motherhood had a profound impact on Stone and her suffrage work. A few months after Alice was born, Stone gave up her lecturing career in order to raise her. Stone found hired help inadequate to meet her standards. The death of a son, born two months prematurely, no doubt caused Stone to be overly-attentive in rearing Alice.

8.   Throughout the 1850s, Stone and Susan B. Anthony had been close friends and confidants as they campaigned for women’s suffrage. Yet in 1869, they parted ways. Anthony and Elizabeth Cady Stanton opposed the Fourteenth and Fifteenth Amendments, which gave black men citizenship and the right to vote. Stone supported both amendments. That year Stanton and Anthony, arguing that white women deserved the vote first, founded the National Woman Suffrage Association. Finding it impossible to work with these women, Stone co-founded the American Woman Suffrage Association (AWSA). For twenty-one years the two organizations worked independently of one another as both campaigned for women’s suffrage. For the rest of their lives, Anthony and Stone remained distrustful and critical of one another.

9.   In 1870 after the family moved to Boston, Stone cut back on her lecturing and co-founded and edited the Woman’s Journal, hoping to create a quieter life for herself. Publishing this newspaper each week never brought her that calm, but the Woman’s Journal became the most important, longest-lived newspaper of its kind, covering women’s issues and helping to promote women’s rights. The paper played a significant role in energizing the movement and leading to the passage of the Nineteenth Amendment in 1920.

10.   In one of the most important sources scholars use to study the nineteenth-century women’s rights movement, the History of Woman Suffrage, Lucy Stone is all but absent. Stanton, Anthony, and Matilda Joslyn Gage edited the first two volumes. Lucy was certain it would present a biased, inaccurate account of the movement. She also shunned the limelight, believing the movement was far more important than its leaders. She refused to participate. Thus, Lucy Stone and the AWSA are all but absent in this monumental work — and in our history.

Featured image: Unnamed members of the women’s suffrage movement carry an American flag and a banner promoting a “mass meeting” of suffragists. Public domain via the Library of Congress.

Sally G. McMillen is the Mary Reynolds Babcock Professor of History at Davidson College. She is author of Lucy Stone: An Unapologetic Life. Read her previous blog posts.

The evolution of women’s love lives: a timeline