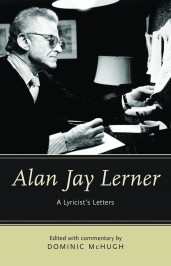 Fifty-nine years ago this month, My Fair Lady made its debut on Broadway to a rapturous critical response. It became the longest-running musical to date, and was a landmark in the genre.

Yet the road to the Mark Hellinger Theatre was long and arduous. The musical is based on George Bernard Shaw’s Pygmalion, of course, but Shaw was against allowing anyone to set his plays to music (Noel Coward was amongst those he turned down). After Shaw’s death in 1950, though, suddenly a musical Pygmalion seemed possible.

However, nobody could get it to happen. Rodgers and Hammerstein, riding on the crest of a wave after the success of Oklahoma! (1943), Carousel (1945) and South Pacific (1949), worked on it for about a year and hoped to turn it into a star vehicle for Mary Martin, but they gave up. Cole Porter, Irving Berlin, and Frank Loesser also turned it down. Then in 1952, Alan Jay Lerner and Frederick Loewe – then known mainly for writing Brigadoon (1947) and Paint Your Wagon (1951) – spent several months working on the material. And gave up.

It’s unclear whether a disagreement was the reason for this – after all, they each went on to start projects with other people – or whether they didn’t know how to adapt Pygmalion satisfactorily. But it wasn’t until the summer of 1954 that they resumed work, found a way to do it, and the rest is history.

The casting process was complicated. Herman Levin, the show’s producer, offered the role of Henry Higgins to Noel Coward and Michael Redgrave, both of whom turned it down, before turning to Rex Harrison. Though Lerner later claimed that Harrison was their original choice, he was at least third on the list. However, his personality and innate sense of light comedy turned out to be perfectly matched to Lerner and Loewe’s adaptation of Shaw’s social satire. With the young Julie Andrews and a veteran co-star in Stanley Holloway also on board, the three actors formed a dream team.

Naturally, there were troubles along the way, including getting Harrison out of a contract for a play in which he was starring in London. During the previews in New Haven, a massive scene, which included two songs (“Come to the Ball” and “Say a Prayer for Me Tonight”) and an expansive ballet, was cut. But the show’s opening on Broadway in March 1956 was greeted by outstanding reviews, and it went on to run for 2,717 performances.

Andrews, Harrison, and Holloway also took the musical in London in 1958, and the show’s global conquest is a fascinating story. It toured America and Britain more than once, and even went on a brief tour of Russia, with the US touring cast, in 1960. A Mexican production featured Placido Domingo, the future star tenor, as one of Alfred P. Doolittle’s sidekicks, and he can be heard briefly on the Mexican cast album of the show.

Such was the cultural prestige of the original production that it affected the way the show was revived in the decades that followed. For the twentieth anniversary staging in 1976, various elements of the original production and choreography were reconceived, and the original Pickering (Robert Coote) returned to the role he created. Five years later, in 1981 a further revival returned not only to the original designs but also brought back Rex Harrison and Cathleen Nesbitt in their original roles of Higgins and Mrs. Higgins, respectively. And in 1993, Stanley Holloway’s son Julian appeared on Broadway in his father’s role.

Harrison and Holloway were able to recreate their roles on screen in the George Cukor movie version, of course, but poor Julie Andrews never got the opportunity to record her performance for posterity because she was famously – and controversially – replaced by the scarcely-singing Audrey Hepburn (most of her vocals were dubbed by Marni Nixon). Vocally, this is certainly frustrating, and it was unquestionably a missed opportunity. However, it’s curious that a recently-uncovered letter from Lerner to Edna Ferber reveals that at one point, Lerner and Loewe considered Hepburn for the original stage version of the show. Furthermore, Hepburn’s stellar quality brings sophistication to the later scenes, and the fact that she was a little nearer in age to Harrison than was Andrews perhaps helps to disguise the fact that Harrison was a good few years older than when he originated the role on Broadway.

Aside from a couple of concert versions, My Fair Lady has been away from New York for over two decades now. She has travelled the globe, made a successful transfer to the big screen, and has even been seen recently in Paris (one of the few major international cities where the show had never played). As we celebrate the fifty-ninth birthday of one of Broadway’s brightest jewels, let’s hope it’s not too long before she returns to the street where she originally lived.

Dominic McHugh is Lecturer in Musicology at the University of Sheffield, the author of Loverly: The Life and Times of My Fair Lady (OUP, 2012), and the editor of Alan Jay Lerner: A Lyricist’s Letters (OUP, 2014). He is currently working on a monograph on Meredith Willson’s “The Music Man” for Oxford’s Broadway Legacies.