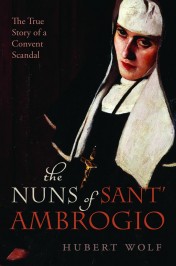 The Nuns of Sant' Ambrogio: The True Story of a Convent in Scandal

The unbelievable story of the Roman convent of Sant’Ambrogio in Rome is about crime and murder, feigned holiness, forbidden sexuality, and the abuse of power over others. Does this controversial story, which casts high dignitaries of the 19th century Catholic Church in a less than flattering light, need to be retold for the 21st century?

The answer is: absolutely. It is a mere stroke of luck for Church historical research that the well-hidden files from the Inquisition trial have been unearthed in the Archive of the Congregation for the Doctrine of the Faith.

What happened to the German Princess Katharina von Hohenlohe at the place of her yearning, a contemplative convent in Rome, is most probably an isolated case: the young novice mistress Maria Luisa feigned to have visions and to work miracles in order to manipulate her surroundings and to satisfy her needs. Supported by various accomplices and protected by mighty men she swept her opponents out of her way – literally under the pope’s eyes.

The files provide evidence of how dangerous exaggerated piety and blind obedience can be, producing a disastrous combination of power, sex, and false holiness within the Roman convent of Sant’Ambrogio.

The nuns were deemed to be “buried alive”; shielded from the outer world that was perceived as threatening by superiors who demanded strict obedience. However, the nuns of the convent weren’t dumb and the supposed saint, Maria Luisa, was always confronted with antagonists. Ultimately, however, she managed to cover up even her worst crimes with outrageous lies about the devil in human form, letters written by the Virgin Mary, and divine punishments. She established a perfidious system that brought unpopular young nuns to the point of praying for their own death. The confessors were no critical authority at all – on the contrary, they themselves were Maria Luisa’s greatest admirers. However the history of Sant’Ambrogio is full of surprises: in the end, Maria Luisa, for instance, appears as the distressed victim of a system that she herself had perfected, and the Roman Inquisition proves to be comparably mild despite its ill fame.

But how did a false saint manage to turn the heads of half of the curia? In order to understand how Maria Luisa achieved this, it must be considered in its context in 19th century Rome. Maria Luisa would have never got away with her lies if she was not part of an environment that wanted to believe her at all costs. The atmosphere in the Vatican was heavy with anxiety, as Pope Pius IX had long lost the support of broad circles of the population and rightly feared he might lose power in the Church state. In 1848, he was forced to flee the Revolution and go into exile. The pope himself increasingly sought refuge in a naïve childish faith. He was convinced that the Mother of God had saved him from drowning when he was a child and that one day she would descend from heaven in order to defend the Church state with the angelic hosts. Simply put, he and those around him wistfully longed for miracles.

The Sant’Ambrogio scandal reveals the dark side of this superficially pious environment, and it put an indelible stain on the history of the Catholic Church that can still be seen today. This is because Pope Pius IX and his predecessors were involved in the scandal of Sant’Ambrogio. Maria Luisa was very close to some figures connected to Neo-scholasticism, the predominant theological orientation at the time, and to the most eminent fathers of the First Vatican Council, which proclaimed the controversial dogmas of the infallibility of the pope and of his primacy of jurisdiction. The story of the convent in scandal tells a lot about the dialectics of enlightened modernity: it is about canting zealots put on the defensive and their longing for a newly enchanted world, in which saints proclaim simple truths, good and evil are easily discernible, the end justifies the means, and in which there always is hope for a miracle. Furthermore, Maria Luisa’s power strategies tell much about the role of women in the Catholic Church of the time, which was clearly dominated by the clergy.

Not even in the 19th century was the Catholic Church as monolithic as it appears from anticlerical clichés. The adherents of mysticism as well as the supporters of rationalism contended for influence in the Vatican. On a church-political level they pursued different strategies; the ultramontane adherents of anti-modernism were confronted with the moderate liberals. The Inquisition trial became a struggle for power between the two most important parties in the Curia; the basic conflict in the background is recognizable if put under a microscope.

Hubert Wolf is Professor of Ecclesiastical History at the University of Muenster in Germany, and has been awarded a number or prizes, including the Leibniz Prize of the German Research Foundation (DFG), the Communicator Prize, and the Gutenberg Prize. An internationally renowned scholar of the history of the papacy, his other books include Pope and Devil: The Vatican's Archives and the Third Reich. His most recent book is The Nuns of Sant' Ambrogio: The True Story of a Convent in Scandal. Elisabeth-Marie Richter is a doctoral candidate at the Westfälischen Wilhelms-Universität Münster and also works as a freelance translator.