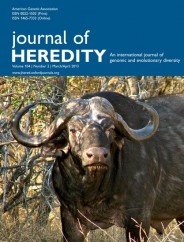 Established in 1903, Journal of Heredity covers organismal genetics across a wide range of disciplines and taxa. Articles include such rapidly advancing fields as conservation genetics of endangered species, population structure and phylogeography, molecular evolution and speciation, molecular genetics of disease resistance in plants and animals, genetic biodiversity and relevant computer programs.

Wolves in the panhandle of southeast Alaska are currently being considered as an endangered species by the US Fish and Wildlife Service in response to a petition by environmental groups. These groups are proposing that the Alexander Archipelago wolf (Canis lupus ligoni) subspecies that inhabits the entire region and a distinct population segment of wolves on Prince of Wales Island are threatened or endangered with extinction.

Whether or not these wolves are endangered with extinction was beyond the scope of our study. However our research quantified the genetic variation of these wolves in southeast Alaska which can contribute to assessing their status as a subspecies.

Therefore we have two questions to consider:

The literature on subspecies and distinct population segment designation is vast, but it is important to understand that subspecies is a taxonomic category, and basically refers to a group of populations that share an independent evolutionary history.

Subspecies designations are often subjective because of uncertainty about the relationships among populations of the same species. This leads many scientists to reject or ignore the subspecies category, but because the ESA is the most powerful environmental law in the United States the analysis of subspecies is of great practical importance.

Our research data showed that the wolves in southeast Alaska are not a homogeneous group, but consist of multiple populations with different histories of colonization, isolation, and interbreeding. The genetic data also showed that the wolves on Prince of Wales Island are not particularly differentiated compared to the overall differentiation in Southeast Alaska and do not support designation as a distinct population segment.

The overall pattern for wolves in southeast Alaska is not one of long term isolation and evolutionary independence and does not support a subspecies designation. Other authors, including biologists with the US Fish and Wildlife Service, also do not designate wolves in southeast Alaska as a subspecies and there is general recognition that North America wolf subspecies designations have been arbitrary and are not supported by genetic data.

There is growing recognition in the scientific community of unwarranted taxonomic inflation of wildlife species and subspecies designations to achieve conservation goals. Because the very nature of subspecies is vague, wildlife management and conservation should focus on populations, including wolf populations. This allows all of the same management actions as proposed for subspecies, but with increased scientific rigor.

Matt Cronin is a Research Professor of Animal Genetics at the University of Alaska Fairbanks. He is co-author of the article ‘Single Nucleotide Polymorphism (SNP) Variation of Wolves (Canis lupus) in Southeast Alaska and Comparison with Wolves, Dogs, and Coyotes in North America’ which is published in the Journal of Heredity.