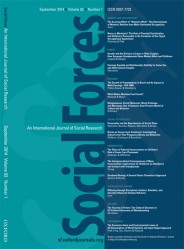 Published in partnership with the Department of Sociology at the University of North Carolina at Chapel Hill, Social Forces is recognized as a global leader among social research journals. The journal emphasizes cutting-edge sociological inquiry and explores realms the discipline shares with psychology, anthropology, political science, history, and economics.

The recent tragedies in France have reminded us of the tensions that are often associated with the relations between religious groups and the larger society. A recent article in Social Forces explores whether Islam fundamentally conflicts with mainstream French society, and whether Muslims are more attached to their religion than they are to their French identity. I spoke with its authors, Rahsaan Daniel Maxwell and Erik Bleich, to further understand the relationship between Muslim and French identities.

Is there tension between French and Muslim identities? If so, why? What influences personal identities?

There is longstanding tension between French and Muslim identities. On the one hand, the French tradition of secularism requires French national identity to be dominant over all other identities. There is a long history of the French republic battling the Catholic church for dominance. So there is a fear that when contemporary Muslims claim their religious identity they are threatening the French tradition of secularism. But there is also clearly an element of anti-minority stigmatization in the French fear of Islam. The main religion in France has historically been Christianity and Islam is perceived by some as a new threat to that tradition. In addition, many Muslims in France are migrants from former French colonies and there are lingering tensions from that history. These are all of the long and deep historical trends but of course in the past 10-15 years there is the added politicization of Islam due to extremist terrorism and the Western-led wars in Afghanistan, Iraq, and elsewhere in the Middle East. Moreover, it is also important to note that many Muslims in France feel conflicted in how to balance their complex identity commitments to religion and the French nation.

To what extent do Muslims face anti-Muslim sentiments in France?

There is considerable evidence of anti-Muslim sentiments in France. Recent studies suggest Muslims face a range of discrimination from the labor market to suspicion and hostility in daily life. Moreover, French society is still working out a way for someone to be legitimately considered French and Muslim.

Your recent Social Forces article focused on Muslims’ religious and national identities in France. To what extent is the Muslim experience in France unique or similar to that in the United States?

One major difference is that religion in the United States is not seen as a threat to the dominance of national identity. In addition, Muslims in the United States are not from former American colonies and tend to be wealthier on average so the historical and economic relationships are different. But, as issues of Islamic extremism and the fight to combat terrorism become more important, there will be more similarities between the two countries.

Why do you think religiosity has been so central to scholarship on Muslim identity?

In many respects it is a natural connection because Islam is a religion. But one of the key points we make in our research is that people’s attitudes have complex origins that cannot just be linked to one aspect of themselves. Moreover, it is important to note that the same people who are now primarily conceived of as ‘Muslims’ in France were not always seen through that religious lens. When they first arrived in the 1950s and 60s they were primarily viewed as ‘migrant workers’ who came to help France rebuild after the Second World War. That led to various debates about how their socio-economic conditions should be managed. Later the same were viewed through the lens of their national origins, as it became clear that Algerians and Moroccans may face different integration challenges from Senegalese, Portuguese or Italian immigrants. It was in the 90s and early 00s that religion and Islam became a more prominent way of understanding the integration challenges. In part this was because of the global politicization of Islam, and it is an important issue. But we want to remind people that identity has multiple sources.

As far as either international policy or narratives in the popular media go, do these findings challenge any prevailing assumptions in those fields?

One main narrative that our findings challenge is the notion that Muslims in France are all alienated and hostile to French identity. Our research speaks to the broad masses of French Muslims who feel a strong connection to France, irrespective of the intensity of their religious practices.

How might Muslim or French identities change in the aftermath of the shootings? How might integration of Muslims in France change in the wake of the terrorist attacks in Paris?

In the short run it is pretty clear that we can expect more tension as non-Muslims in France are afraid of more attacks and Muslims are afraid of anti-Muslim backlashes. One can hope for more unity in the long-term, and there is some historical evidence to support this, as previous groups of immigrants in France at times engaged in violence on French soil. Whatever happens, much will depend on the actions that occur in the upcoming weeks and months.

Rahsaan Daniel Maxwell and Erik Bleich are the authors of “What Makes Muslims Feel French?” (available free to read for a limited time) in Social Forces.

Rahsaan Daniel Maxwell, Associate Professor of Political Science at The University of North Carolina at Chapel Hill, received his BA from the University of Pennsylvania (1998) and his Ph.D. from the University of California, Berkeley (2008). His research examines the politics of ethnic, racial, religious, and immigrant-origin minorities, with a particular focus on Western Europe. He has explored these issues from numerous angles, including political representation, participation, identity, discrimination, and attitudes about government

Arne L. Kalleberg is the Kenan Distinguished Professor of Sociology at the University of North Carolina at Chapel Hill and editor of Social Forces.