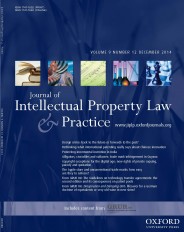 JIPLP is a peer-reviewed journal dedicated to intellectual property law and practice. The journal is specifically designed for IP lawyers, patent attorneys and trade mark attorneys both in private practice and working in industry.

When “The Case of the Black Macaque” scooped media headlines this summer, copyright was suddenly big news. Here was photographer David Slater fighting Wikipedia over the right to disseminate online a portrait photo of a monkey which had, contrary to all expectations and the law of averages, managed within just a few jabs of a curious finger, to take a plausible, indeed publishable “selfie”. Did Slater have the right to control the image since it was his camera on which it was recorded, or was it free for the world to use on the basis that he was not its author, the true creator being the crested black macaque who, for all her charm and dexterity, was neither a real nor legal person and therefore disentitled to any legal rights?

Disputes like this make great headlines, but cause even greater headaches for the intellectual property (“IP”) community. Most have little legal substance to them and are interesting only because of their facts, but that’s what drives journalists’ involvement and readers’ interest, making it easier for the media to attract paying advertisers. By the time they pass through the media machine these tales are frequently mangled to the point at which IP lawyers can scarcely recognise them. In one recent case involving a well-known chocolate brand, a company was said to have patented its copyright in England in order to sue a business in Switzerland for trade mark infringement.  To the layman this may sound fine, but it’s about as sensible to the expert as telling the doctor that you’ve got a tummy ache in your little finger because your cat ate the goldfish last night.  We IP-ers try to explain the real story, but monkeys and selfies are far more fun than the intricacies of copyright law and, by the time we’ve tried to put the record straight, the next exciting story has already broken.

“By the time they pass through the media machine, these tales are frequently mangled to the point at which IP lawyers can scarcely recognise them”

The next selfie episode to hit the headlines, far from featuring a portrait, was quite the opposite end of the anatomical spectrum. Model Kim Kardashian objected that Jen Selter’s selfies constituted copyright infringements of photos which had been taken of Kim Kardashian’s bottom (occasionally colloquially described as her “trademark” bottom, but not yet registered in conventional legal fashion). Here the only questions IP lawyers address are (i) are the pictures of Kim Kardashian’s backside copyright-protected works and (ii) does the taking by Jen Selter of selfies of her own posterior constitute an infringement? For press and public, however, the issue morphs into the much more entertaining, if legally irrelevant, one of whether a person has copyright in their own bottom.

There are many IP rights apart from copyright and they all have their macaque moments. Trade mark law is full of episodes of evil corporations stealing words from the English language and stopping anyone else using them. Patent law (in which the legal protection of body parts very much smaller than bottoms, such as sequences of DNA, does have some relevance) is garnished with tales of greed and intrigue as people seek to steal one another’s ideas and avariciously monopolise them. Confidentiality and the right to publicity have their own rip-roaring encounters in court as amorous footballers who are “playing away” seek to hush up their extramarital (that’s one word, not two) exploits. Meanwhile, the women with whom they shared moments of illicit intimacy seek to cash in on their news value by selling them to the highest bidder. For IP lawyers the legal issues are serious and, when cases come to court, they achieve precedential status that governs how future episodes of the same nature might be handled. For press and public, the issues are different: who is the footballer, who is the woman — and are there any pictures (ideally selfies)?

Seriously, the rate at which not just eye-catching tales like those related above but also far less glamorous tales result in litigation, or even legislation, makes it hard-to-impossible for practitioners, academics, administrators and businessmen to keep abreast of the law, let alone understand its deeper significance for those affected by it: businesses, governments, consumers, indeed everyone. Publishers like OUP are increasingly raising the tempo of their own responses to the IP information challenge, utilising both formal and informal media, in print and online.  Since legal publishing is largely reactive, we can narrow the gap between the time an exciting new event or legal decision hits the popular media and the point at which we can strip it down to its bare legal essentials. But it will take more than a little monkeying around before we can close that gap completely.