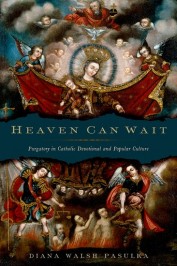 Heaven Can Wait: Purgatory in Catholic Devotional and Popular Culture

OUP author Diana Walsh Pasulka recently caught up with fellow scholar of religion Jeffrey J. Kripal, to discuss the study of the supernatural and the paranormal within the university.

Diana Walsh Pasulka: You’ve written about the origin of the term paranormal and its link to the British and American Spiritualist movements. You’ve noted that the paranormal is inextricably linked to the idea of the sacred. How do you see the paranormal as different from the idea of the supernatural, which has traditionally been used to describe events that exceed naturalist explanations, like miracles, for instance?

Jeffrey J. Kripal: As a category or coinage, the paranormal is an attempted secularization of the supernatural. I like to translate it as the “super natural.” This is what the original inventors of the term meant, anyway. They meant to suggest that (a) psychical phenomena were quite real but (b) beyond our present scientific modeling and theorizing. The phenomena in question were thus both “normal” but also “beyond” (para-). Someday, these theorists thought, we would be able to incorporate these phenomena into our understanding of the natural world. So, for example, poltergeist phenomena were read not as the work of “angry ghosts” floating around but as expressions of the “ghosts of anger,” that is, they understood these as exteriorized symbolic expressions of pent-up frustration, conflict or angst. This may have been an advance, but it is still deeply offensive to our rationalisms. How, say, an abused or conflicted adolescent can start the curtains on fire or explode a vase at a distance might still be natural, but this is clearly a nature behaving in some most extraordinary or special ways. This is a kind of supernature.

Diana Walsh Pasulka: In your most recent work you’ve called for a renewed examination of the supernatural and paranormal aspects of religion. You’ve also noted the irony that scholars of religion have tended to avoid these subjects even as they are presumably at the heart of most religious traditions. Can you say a bit more about how you would like to see this renewed emphasis develop? For example, is this an interdisciplinary project?

Jeffrey J. Kripal: I find it curious that the study of religion has “taken off the table” precisely those anomalous aspects of human experience that lie behind or within some of the most universally distributed religious ideas–say, strikingly real encounters with dead loved ones who carry some empirical information (say, about the means or mode of their death) that in turn give rise to the belief in a surviving “soul.” We are allowed to treat these beliefs as “discourses” or as power-plays, of course, but never as empirical phenomena in their own right. Then we are told that there is nothing essentially “religious” about religion, that it is all just context and construction, which, of course, is perfectly true, since we just took all of the stuff that is not just context and construction off the table. I find this situation circular, inadequate and, above all, depressing. It is not that it is wrong. It is simply that it is half-right. I think it is time to bring the other half back in and re-enchant reason.

Diana Walsh Pasulka: You’ve stated that popular culture has adopted the paranormal elements that have been well documented in the history of religion and folklore. Do you see popular culture, science fiction and superhero movies, for instance, replacing this aspect of religion? Or, perhaps, complimenting it? Or, does this development indicate something entirely different?

Jeffrey J. Kripal: I think the paranormal has migrated into popular culture and entertainment because it has been effectively exiled from both elite intellectual culture (which is more or less controlled now by scientific or Marxist materialism) and, oddly, the religious traditions themselves. But paranormal phenomena are clearly part of our human nature, part of human history. If we will not talk about them either in our public intellectual and scientific lives or in our public religious lives, where are they supposed to go? They will never go away, by the way, not at least as long as we are here, and for one simple reason: they are expressions of us.

Diana Walsh Pasulka is Associate Professor of Religious Studies at the University of North Carolina, Wilmington. Her book Heaven Can Wait: Purgatory in Catholic Devotional and Popular Culture (2014) examines the Catholic doctrine of purgatory and its relationship to the supernatural. She serves as the chair of the American Academy of Religion group Death, Dying, and Beyond. Her research has appeared in movies that involve religious themes, including The Conjuring (2013), among others.

Jeffrey J. Kripal holds the J. Newton Rayzor Chair in Philosophy and Religious Thought at Rice University, where he chaired the Department of Religion for eight years and helped create the GEM Program, a doctoral concentration in the study of Gnosticism, Esotericism, and Mysticism that is the largest program of its kind in the world. He is the co-author of Hidden Intercourse: Eros and Sexuality in the History of Western Esotericism (Fordham) with Wouter J. Hanegraaff. His writings explore mysticism, the paranormal, and the sacred.