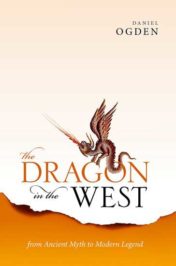 The Dragon in the West: From Ancient Myth to Modern Legend

From its origins as an ancient Celtic festival celebrating the end of the harvest, over time Halloween has evolved into a day of trick-or-treating, scary films, costumes, and carving pumpkins.

From witches to werewolves, explore a range of titles selected by the OUP Arts & Humanities team for you to read in the lead up to Halloween.

The Dragon in the West: From Ancient Myth to Modern Legend by Daniel Ogden

How did the dragon get its wings? Everyone in the modern West has a clear idea of what a dragon looks like and of the sorts of stories it inhabits, not least devotees of the fantasies of J. R. R. Tolkien, J. K. Rowling, and George R. R. Martin. A cross between a snake and some fearsome mammal, often sporting colossal wings, they live in caves, lie on treasure, maraud, and breathe fire. They are extraordinarily powerful, but even so, ultimately defeated in their battles with humans. What is the origin of this creature? A creature popular in contemporary fiction and cinema, Ogden reveals how the dragon was known to the ancient Greek and Roman worlds, and came down to us through early Christianity, Anglo-Saxon, and Norse legends.

Read The Dragon in the West: From Ancient Myth to Modern Legend

The Ghost in the Image: Technology and Reality in the Horror Genre by Cecilia Sayad

Our century has seen the proliferation of reality shows devoted to ghost hunts, documentaries on hauntings, and horror films presented as found footage. The horror genre is no longer exclusive to fiction and its narratives actively engage us in web forums, experiential viewing, videogames, and creepypasta. The Ghost in the Image offers a new take on the place that supernatural phenomena occupy in everyday life, arguing that the relationship between the horror genre and reality is more intimate than we like to think.

Read The Ghost in the Image: Technology and Reality in the Horror Genre

This richly illustrated history provides a fresh approach to the complex story of witchcraft and magic. From spells written on clay tablets to the boy who lived, magical beliefs and practices have been woven throughout our history and culture for over 4,000 years. The Oxford Illustrated History of Witchcraft and Magic explores the anthropology of magic around the globe, investigates what the archives really tell us about the sixteenth- and seventeenth-century witch trials, and looks at witches in film from The Wizard of Oz to Buffy the Vampire Slayer.

Read The Oxford Illustrated History of Witchcraft and Magic

Horror expert Mathias Clasen delves into the psychological science of horror cinema to bust some of the worst myths and correct the biggest misunderstandings surrounding the genre. In short and highly readable chapters peppered with vivid anecdotes and examples, he addresses the nervous person’s most pressing questions.

The Werewolf in the Ancient World by Daniel Ogden

Tales of the werewolf are well established as a sub-strand of the popular horror genre; less widely known is how far back in time their provenance lies. This is the first book in any language devoted to the werewolf tales that survive from antiquity, exploring their place alongside witches, ghosts, demons, and soul-flyers in a shared story-world.

Read The Werewolf in the Ancient World

Four o’clock in the morning, and the lights are on and still there’s no way we’re going to sleep, not after the film we just saw. The book we just read. Fear is one of the most primal human emotions, and one of the hardest to reason with and dispel. So why do we scare ourselves? It seems almost mad that we would frighten ourselves for fun, and yet there are thousands of books, films, games, and other forms of entertainment designed to do exactly that. Exploring the key tropes of the genre, including its monsters, its psychological chills, and its love affair with the macabre, Horror: A Very Short Introduction discusses why horror stories disturb us, and how society responds to literary and film representations of the gruesome and taboo.

A Supernatural War: Magic, Divination, and Faith during the First World War by Owen Davies

A Supernatural War reveals the surprising stories of extraordinary people in a world caught up with the promise of occult powers. Uncovering and examining beliefs, practices, and contemporary opinions regarding the role of the supernatural in the war years, Owen Davies explores the broader issues regarding early twentieth-century society in the West, the psychology of the supernatural during wartime, and the extent to which the war cast a spotlight on the widespread continuation of popular belief in magic.

Read A Supernatural War: Magic, Divination, and Faith during the First World War

It makes us jump. It makes us scream. It haunts our nightmares. So why do we watch horror? Why do we play it? What could possibly be appealing about a genre that tries to terrify us? Why would we subject ourselves to shriek-inducing shocks, or spend dozens of hours watching a television show about grotesque flesh-eating monsters? Monstrous Forms offers a theory of horror that works through the genre across a broad range of contemporary moving-image media: film, television, video games, YouTube, gifs, streaming, and virtual reality.

Cyclops: The Myth and its Cultural History by Mercedes Aguirre and Richard Buxton

A Cyclops is popularly assumed to be nothing more than a flesh-eating, one-eyed monster. In an accessible, stylish, and academically authoritative investigation, this book seeks to demonstrate that there is far more to it than that—quite apart from the fact that in myths the Cyclopes are not always one-eyed! This book provides a detailed, innovative, and richly illustrated study of the myths relating to the Cyclopes from classical antiquity until the present day.

Read Cyclops: The Myth and its Cultural History

Old Norse Mythology provides a unique survey of the mythology of Scandinavia: the gods Þórr (Thor) with his hammer, the wily and duplicitous Óðinn (Odin), the sly Loki, and other fascinating figures. They create the world, battle their enemies, and die at the end of the world, which arises anew with a new generation of gods. These stories were the mythology of the Vikings, but they were not written down until long after the conversion to Christianity, mostly in Iceland.