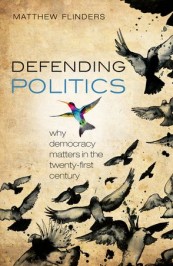 Matthew Flinders makes a highly unfashionable but incredibly important argument of almost primitive simplicity: democratic politics delivers far more than most members of the public appear to acknowledge and understand. This book provides a fresh, provocative, and above all optimistic view of the achievements and future potential of democratic politics.

British politics is currently located in the eye of a constitutional storm. The Scottish independence referendum shook the political system and William Hague has been tasked with somehow re-connecting the pieces of a constitutional jigsaw that – if we are honest – have not fitted together for some time. I have written an open letter, encouraging the Leader of the House to think the unthinkable and to put ‘the demos’ back into democracy when thinking about how to breath new life into politics.

Dear William (if I may),

I do hope the Prime Minister gave you at least a few minutes warning before announcing that you would be chairing a committee on the future constitutional settlement of the UK. Could you have ever hoped for a more exciting little project to sort out before you leave Parliament next May? Complex problems rarely have simple answers and this is why so many previous politicians have failed to deal with a whole set of questions concerning the distribution of powers and the respective roles of various sub-sets of both politicians and ‘publics’. The timetable you have been set is – how can I put it – demanding and those naughty people in the Labour Party have taken their bat and ball home and are refusing to play the constitutional game.

I’m sure you know how to sort all of this out but I just thought you might like to know that amongst all the critics and naysayers who claim the British constitution is in crisis I actually think that a crisis might be just what we need. Not a crisis in terms of burning cars and riots in the streets but a crisis in terms of ‘creative destruction’ and the chance for a new way of looking at perennial problems. What’s more – as the Scottish referendum revealed – there is a huge amount of latent democratic energy amongst the public. From Penzance to Perth and from Cardigan to Cromer the public is not apathetic or disinterested about politics but they feel disconnected from a London-based system that is remote in a number of ways.

The reasons for this sense of disconnection are numerous and complex but as a constitutional historian you will know better than most people that British democracy has evolved throughout the centuries with a deep animosity to public engagement. The (in)famous ‘Westminster Model’ that we imposed on countries around the world was explicitly elitist, centralized and to a great extent insulated from public pressure. These features and values – as Scotland revealed – are now crumbling under the weight of popular pressure that will not accept their legitimacy in the twenty first century. But as I said, this should be interpreted as a positive opportunity for re-imagining, for re-connecting and for breathing new life into the system.

The question is how to deliver on this potential for positive change in a way that takes the people with you?

Now I’m no Vernon Bogdanor or Peter Hennessy and so writing notes to members of the Cabinet is not a common task but could I just offer three little ideas that might help smooth the path you have been asked to map out?

Secondly, make sure all your officials are also ignoring Russell Brand.

Finally, the trick to moving forward is thinking about constitutional reform not as being like moving pieces on a chessboard or as a zero-sum game in which a ‘win’ for one side means a ‘loss’ for the other. This traditional way of thinking about constitutional politics has served us badly and the aim has to be to turn the problem upside-down and inside-out in a way that creates new opportunities. This means starting with the people – with the demos – and viewing the constitutional puzzle not like a board game but as a multi-level game that suddenly focuses attention on the existence of connections or bonds.

The real challenge is not a lack of political interest amongst the public (indeed the appetite for meaningful engagement is huge) but a lack of ways of drawing upon the upsurges of bottom-up civic energy that keep exploding in various forms – from the off-line Occupy Movement to the on-line growth of ‘clicktivism’ – but to which the ‘traditional’ political institutions seem to offer no answers. Put slightly differently, the public no longer believes that traditional forms of political engagement are actually meaningful. In this context the promises of populist movements suddenly become attractive and Mr Farage gorges on a feast of anti-politics. The focus of your committee on a new constitutional settlement might therefore adopt a quite different approach to all those committees, commissions and inquiries that have gone before you by focusing on what I term ‘nexus politics’. That is, on the institutions and processes that can re-connect the spontaneous and the local and the single issue with the pre-existing institutional framework in a way that positively channels, absorbs and welcomes civic energy and activism. In short, British politics must learn to love democracy in a manner that is quite different to the one-night stand of five-yearly elections.

The problem is that despite the Prime Minister’s pledge on the 19 September to ensure “wider civic engagement… we will say more about this in the coming days”, the days have ticked by but the plans for public engagement remain unclear. What we are experiencing is best characterized as a (classically British top-down) ‘constitutional moment’ in which the existing elite decide what they think is best for the public. However, it has not yet evolved into a truly ‘democratic moment’ in which the public decide for themselves. My note – to bring things to a close – is therefore a simple plea for the Creation of a Citizens Assembly on Constitutional Reform that takes party politics out of discussions about the future and puts power in the power of the people. What a radical thought…

P.S. Did I mention avoiding Russell Brand at all costs?

Visiting Distinguished Professor in Governance and Public Policy at Murdoch University, Western Australia. He is also Chair of the Political Studies Association of the United Kingdom and the author of Defending Politics (2012). He wrote this blog while sitting in the car park of Hull Ionians Rugby Club where his son was playing rugby [final score 47-7 to Sheffield].