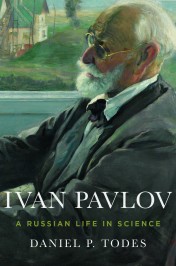 An iconic figure of 20th century science and culture, Ivan Pavlov is best known as a founding figure of behaviorism who trained dogs to salivate at the sound of a bell and offered a scientific approach to psychology that ignored the “subjective” world of the psyche itself.

While researching Ivan Pavlov: A Russian Life in Science, I discovered that these and other elements of the common images of Pavlov are incorrect. The following 22 facts and observations are a small window onto the life of a man whose work, life and values were much more complex and interesting than the iconic figure with whom we are so familiar.

Featured image: Pavlov, center, operates on a dog to create an isolated stomach or implant a permanent fistula. After the dog recovered, experiments began on an intact and relatively normal animal, which was a central feature of Pavlov’s scientific style. Courtesy of Wellcome Institute Library, London. Used with permission.

Daniel P. Todes is Professor of History of Medicine at The Johns Hopkins University. The author of Ivan Pavlov: A Russian Life in Science, he is also the author of Darwin Without Malthus: The Struggle for Existence in Russian Evolutionary Thought and two earlier books on Pavlov: Pavlov's Physiology Factory: Experiment, Interpretation, Laboratory Enterprise, and a short biography for young adults, Ivan Pavlov: Exploring the Animal Machine.