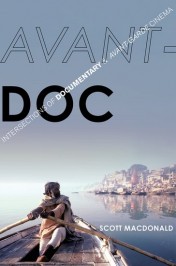 An intersection of an avant-garde artistic practice and a documentary impulse helped to instigate the dawn of cinema itself. When Eadweard Muybridge and Etienne-Jules Marey were discovering and exploring the possibilities of photographic motion study, they were the photographic avant-garde of that moment. And their subject was the documentation of the motion of animals, birds, and human beings, presumably so that we could know, more fully, the truth about this motion. And at the moment when W. K. L. Dickson perfected the Kinetograph and Kinetoscope and the Lumière Brothers perfected the Cinématographe and the projected motion picture, they in turn became the photographic avant-garde; and their primary fascination, too, was the documentation of motion, specifically human activity, first, in the world around them and soon, in the case of the Lumières, across the globe.

During the 1940s, the most important development for independent cinema in the United States was the emergence of a full-fledged film society movement. The leading contributor was Cinema 16, founded by Amos and Marcia Vogel in New York City in 1947. At its height, Cinema 16 had 7,000 members, and filled a 1,500-seat auditorium twice a night for monthly screenings. Cinema 16’s programming was an inventive mixture of documentary and avant-garde film.

The development of light-weight cameras and tape recorders, more flexible microphones, and faster film stocks during the late 1950s created additional options that in one sense, drove documentary filmmaking and avant-garde filmmaking apart, but in another sense, created a different kind of intersection between them. Sync-sound shooting expanded the options available to filmmakers committed to documentary, instigating forms of cinematic entertainment that functioned as critiques of Hollywood filmmaking and early television. Drew Associates, D. A. Pennebaker, Frederick Wiseman, and the Maysles Brothers fashioned engaging melodrama out of real life in Crisis: Behind a Presidential Commitment (1963), Don’t Look Back (1967), Hospital (1968), and Salesman (1968).

During the same decade, avant-garde filmmakers were producing very different forms of documentary, often by abjuring sound altogether. Stan Brakhage was committed to the idea of cinema as a visual art, and created remarkable—silent—confrontations of visual taboo such as Window Water Baby Moving (1959) and The Act of Seeing with One’s Own Eyes (1972)—now recognized as canonical documentaries. These films could hardly have been more different from the cinema verite films, but we can now see that Brakhage shared the mission of the cinema verite documentarians: the cinematic confrontation of convention-bound commercial media.

In 1955, Francis Flaherty, Robert Flaherty’s widow, established a symposium to honor her husband’s filmmaking oeuvre and to promote his commitment to filmmaking “without preconceptions.” In recent decades “the Flaherty,” as the symposium has come to be called, has attracted dozens of filmmakers, programmers, teachers, students, and other cine-aficionados for week-long immersions in programs of screenings and discussions. Modern Flaherty seminars have often been driven by an implicit debate about what the correct balance between documentary and avant-garde film should be at the seminar.

Since the 1940s, avant-garde filmmakers have found ways of exploring the personal, first by psycho-dramatizing their inner disturbances (Maya Deren’s Meshes of the Afternoon and Kenneth Anger’s Fireworks are landmark instances), and later by filming the particulars of their personal lives. Brakhage documented dimensions of his personal life in many films, as did Carolee Schneemann, in Fuses (1967), and Jonas Mekas, in Walden (1969) and Lost Lost Lost (1976). And during the 1980s, avant-garde filmmakers Su Friedrich (in The Ties that Bind, 1984; and Sink or Swim, 1990) and Alan Berliner (in Intimate Stranger, 1991; and Nobody’s Business, 1996), used experimental techniques learned from other avant-garde filmmakers to directly engage their family histories.

What has come to be called “personal documentary” (basically, the use of sync-sound to explore personal issues) was instigated in the early 1970s by Ed Pincus’s Diaries (filmed from 1971-1976; completed in 1981), Miriam Weinstein’s Living with Peter (1973), Amalie Rothschild’s Nana, Mom and Me (1974), Alfred Guzzetti’s Family Portrait Sittings (1975). By the 1980s, several of Pincus’s students at MIT were contributing to this approach, among them Ross McElwee, whose films, including Sherman’s March (1986), Time Indefinite (1994), and Photographic Memory (2011) are an on-going personal saga.

Globalization and the standardization of so many dimensions of modern life, along with threats to the environment, have created a desire on the part of many filmmakers to pay a deeper attention to the particulars of Place. Since the early 1970s, contemplations of Place have been produced by avant-garde filmmakers Larry Gottheim (Fog Line, 1970; Horizons, 1973), Nathaniel Dorsky (Hours for Jerome, 1982), James Benning (13 Lakes, 2004), Peter Hutton (Landscape (for Manon), 1987; At Sea, 2007), Sharon Lockhart (Double Tide, 2009) and many others. A fascination with Place, or more precisely, people-in-place, also characterizes the documentaries coming out of Harvard’s Sensory Ethnography Lab (SEL), including Ilisa Barbash and Lucien Castaing-Taylor’s Sweetgrass (2009), Castaing-Taylor and Véréna Paravel’s Leviathan (2013), and Stephanie Spray and Pacho Velez’s Manakamana (2014). Indeed, the films of Hutton, Benning, and Lockhart, in particular, have been shown regularly at the SEL.

The interviewees in Avant-Doc reveal a wide range of ways in which their own work and the work of colleagues function creatively within the liminal zone between documentary and avant-garde and the ways in which the intersections between these histories have played into their work.