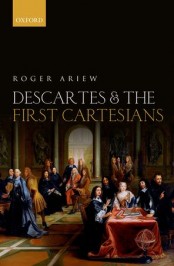 Descartes and the First Cartesians

René Descartes wrote his third book, Principles of Philosophy, as something of a rival to scholastic textbooks. He prided himself in ‘that those who have not yet learned the philosophy of the schools will learn it more easily from this book than from their teachers, because by the same means they will learn to scorn it, and even the most mediocre teachers will be capable of teaching my philosophy by means of this book alone’ (Descartes to Marin Mersenne, December 1640).

Still, what Descartes produced was inadequate for the task. The topics of scholastic textbooks ranged much more broadly than those of Descartes’ Principles; they usually had four-part arrangements mirroring the structure of the collegiate curriculum, divided as they typically were into logic, ethics, physics, and metaphysics.

But Descartes produced at best only what could be called a general metaphysics and a partial physics.

Knowing what a scholastic course in physics would look like, Descartes understood that he needed to write at least two further parts to his Principles of Philosophy: a fifth part on living things, i.e., animals and plants, and a sixth part on man. And he did not issue what would be called a particular metaphysics.

Descartes, of course, saw himself as presenting Cartesian metaphysics as well as physics, both the roots and trunk of his tree of philosophy.

But from the point of view of school texts, the metaphysical elements of physics (general metaphysics) that Descartes discussed—such as the principles of bodies: matter, form, and privation; causation; motion: generation and corruption, growth and diminution; place, void, infinity, and time—were usually taught at the beginning of the course on physics.

The scholastic course on metaphysics—particular metaphysics—dealt with other topics, not discussed directly in the Principles, such as: being, existence, and essence; unity, quantity, and individuation; truth and falsity; good and evil.

Such courses usually ended up with questions about knowledge of God, names or attributes of God, God’s will and power, and God’s goodness.

Thus the Principles of Philosophy by itself was not sufficient as a text for the standard course in metaphysics. And Descartes also did not produce texts in ethics or logic for his followers to use or to teach from.

These must have been perceived as glaring deficiencies in the Cartesian program and in the aspiration to replace Aristotelian philosophy in the schools.

So the Cartesians rushed in to fill the voids. One could mention their attempts to complete the physics—Louis de la Forge’s additions to the Treatise on Man, for example—or to produce more conventional-looking metaphysics—such as Johann Clauberg’s later editions of his Ontosophia or Baruch Spinoza’s Metaphysical Thoughts.

Cartesians in the 17th century began to supplement the Principles and to produce the kinds of texts not normally associated with their intellectual movement, that is treatises on ethics and logic, the most prominent of the latter being the Port-Royal Logic (Paris, 1662).

By the end of the 17th century, the Cartesians, having lost many battles, ulti­mately won the war against the Scholastics.

The attempt to publish a Cartesian textbook that would mirror what was taught in the schools culminated in the famous multi-volume works of Pierre-Sylvain Régis and of Antoine Le Grand.

The Franciscan friar Le Grand initially published a popular version of Descartes’ philosophy in the form of a scholastic textbook, expanding it in the 1670s and 1680s; the work, Institution of Philosophy, was then translated into English together with other texts of Le Grand and published as An Entire Body of Philosophy according to the Principles of the famous Renate Descartes (London, 1694).

On the Continent, Régis issued his General System According to the Principles of Descartes at about the same time (Amsterdam, 1691), having had difficulties receiving permission to publish. Ultimately, Régis’ oddly unsystematic (and very often un-Cartesian) System set the standard for Cartesian textbooks.

By the end of the 17th century, the Cartesians, having lost many battles, ulti­mately won the war against the Scholastics. The changes in the contents of textbooks from the scholastic Summa at beginning of the 17th century to the Cartesian System at the end can enable one to demonstrate the full range of the attempted Cartesian revolution whose scope was not limited to physics (narrowly conceived) and its epistemology, but included logic, ethics, physics (more broadly conceived), and metaphysics.

Roger Ariew joined the Philosophy Department at the University of South Florida in 2004 after a postdoctoral position at the University of Chicago, and many years at Virginia Tech. His principal interests concern the relations between philosophy, science, and society in the early modern period. He is the author of Descartes and the First Cartesians (Oxford University Press, 2014). He is also the author of Descartes and the Last Scholastics (Cornell University Press, 1999), with a second, revised and expanded edition published as Descartes among the Scholastics (2011), co-author of Historical Dictionary of Descartes and Cartesian Philosophy (Scarecrow Press, 2010; 2nd ed. 2014), and the editor and translator of such works as Descartes, Philosophical Essays and Correspondence (Hackett, 2000). He has been awarded multiple fellowships and research grants by the National Endowment for the Humanities and the National Science Foundation. He is currently working on a complete historical-critical edition and English translation of Descartes' correspondence, with Theo Verbeek and Erik-Jan Bos.

How well do you know George Berkeley? [quiz]