I think some sort of closure is needed after we have heard the arguments for and against spelling reform by two outstanding scholars. Should we do something about English spelling, and, if the answer is yes, what should we do? Conversely, if no, why no? Native speakers—let us call them native spellers—of English have long since stopped worrying: school is a place where they must spend twelve rather dull years (though occasionally spiced with proms, sports, and camping out) and survive multifarious bullying (note: bullying is bad, even illegal). Learning to spell is also bullying, but no law exists against it, and a spellchecker with its autocorrect is a nice palliative. There is no opprobrium in saying: “I am a terrible speller”; it even sounds coy. The only people who worry are foreigners. With regard to English, they have neither “competence” nor the wonderful thing called gut feeling, and they honestly try to memorize (memorise?) hundreds of words like hold ~shoulder, full ~ awful, awful ~ awesome, lame ~ claim, usable ~ feasible, and acknowledge ~ accredit. Our collective heart bleeds when we ponder the fate of undocumented aliens and the many difficulties any recent outsider has to overcome during the period of adjustment.

I am all for some version of spelling reform (to boost my case, I’ll capitalize the first letters: Spelling Reform), but my firm conviction is that, if something is going to be done about it, it will be done only out of compassion for our new and prospective citizens.

What can or should be done? Perhaps it will be useful to state a few trivial facts.

(1)   Given a multitude of English dialects, no system that depends on rendering sounds by the letters of the Roman alphabet will satisfy everybody; Bradley was quite right. We cannot achieve the neatness of Finnish. Some people distinguish between horse and hoarse in pronunciation; they, and only they, naturally, applaud the spelling –or– ~ –oar-. For most American speakers writer and rider are homophones, though professional phoneticians tell us that there is a difference. I wonder. If some difference existed, students would not be filling their papers with pearls like title (= tidal) wave, deep-seeded (= seated) prejudice, and even futile (= feudal) system (but you see: they never studied medieval history and have long since realized the futility of their endeavors to spell polysyllables correctly; no feud in this department). Also, there would not have been cartoons featuring tutors, tooters, and Tudors. Any spelling of words with t between vowels will “disenfranchise” somebody. Horse ~ hoarse, Plato ~ play dough, and the rest like them are minor irritants. The pronunciation of words like time and tame is much more confusing: time, tahm, toim for time and time for tame are real killers. Do you chinge trines at foiv(e) o’clock? Perhaps you should. Conclusion: in English, strictly phonetic spelling is a utopia. For pedagogical purposes some version of phonetic transcription may be useful, but this is as far as it goes. 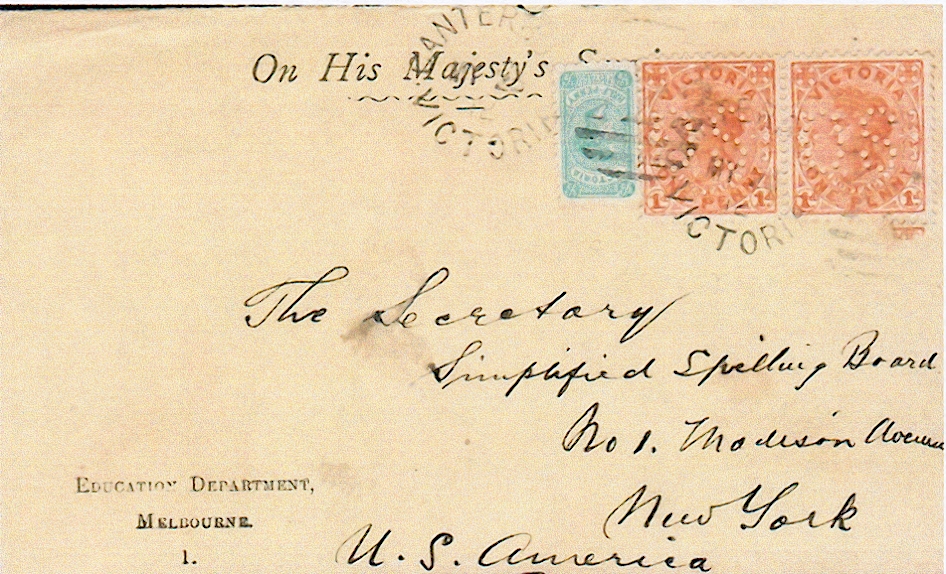 (2)   With regard to spelling, etymological considerations should be of minimal importance. It is true that many centuries ago knock and gnaw had the sounds of k- and g-. Why is this relic to be honored? Many other words have also lost their initial consonants. For example, hn-, hl-, and hr– were legitimate onsets in Old English. Yet h- has been shed before n, r, and l, and we are much the better for the loss of h- in the written form of loud, nap, and rue. Or should we “hrather” have hloud, hnap, and hrue? Etymology takes us to the past, but a good deal of chaos characterized Middle and Early Modern English spelling. A look at any relatively old word in the OED will reveal a baffling multitude of spelling variants through history. People often say that they would like to keep etymological spelling for its sentimental value. What sentiment? What value? Those who love the history of English (a laudable passion) should enroll in courses on the older periods of their mother tongue: Beowulf, Chaucer, (H)occleve….

(3)   Every spelling reform partly destroys the link between the printed books of the past and the present. Yet anyone who will leaf through the literature published in the eighteenth century will notice that even our recent tradition has not been perfectly stable (also read Shakespeare’s texts brought out in the seventeenth century). Mild reforms have been implemented in several countries. In Russia, not all of them can even be called mild. Especially radical was the one associated with the events of 1917, but the project of that reform predated the Bolsheviks’ takeover of power. Several letters that no longer had any correspondence in the modern language disappeared. The rupture was serious, yet the change made sense, old books are not hard to understand, and today probably no one would plead for the return to the prerevolutionary norm. Sweden too went a long way toward bringing spelling and even grammar in line with everyday speech.

More recently, spelling has been modernized in Iceland and Germany. The timid German reform met with violent opposition; yet now everybody seems to be accustomed or resigned to the novelties. There is no reason why English spelling should remain untouchable. At least one experiment took place in the English-speaking world not too long ago. In the United States, –or replaced –our; centre and its ilk became center; the suffix –ize replaced –ise; words like moulder and smoulder (but not boulder or shoulder!) lost their u; practice and practise, along with defence and defense have lost the letter that distinguishes the verb from the noun (one has lost it s and the other its c); and so forth. English culture survived those measures.

(4)   This brings me to my main point. For any project of Spelling Reform (still capitalized) to be successful, it should be gradual and progress in several waves. The greatest offender is superfluous letters. The reformers who were active about a hundred years ago began with hav, giv, liv, ar (= have, give, are). This, I think, was a mistake. Such heavy-duty words should be left intact, at least for now. Society will not agree to “liv and make liv.” At first, only painless measurers should be suggested. Perhaps opponents will agree to get rid of the second l in full or to follow (folow?) some (!) American variants, seeing that, for instance, the difference between the suffixes –ize and –ise has little justification.

An etymological blog is not a proper forum for offering a ful(l)-fledged program. At this stage, it is more important to engage the public than to argue over details. As long as the reformers keep preaching to the converted (choir, quire), nothing will happen. At one time, I thought that influential politicians should be approached, but I was probably wrong. Politicians will always have to take care of more important things, like raising or cutting taxes, sending or not sending troops abroad, and getting reelected. The suggestion I have recently heard (“try to win over journalists and publishers”) sounds more practicable. After all, journalists write for newspapers, they wield the metaphorical pen, while publishers sell books. Are they interested? Will anyone contributing to numerous word colum(n)s respond to this post? Will dictionary makers take part in the discussion? Ladies and gentlemen of the Fourth Estate, hasn’t the time come for you to join forces with the reformers? Writers of the world, unite!

Spelling reform: not a “lafing” matter