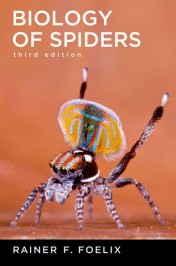 Spiders are not exactly renowned for being colorful animals. Admittedly, most of the more than 40,000 spider species are rather drab looking. However, there are certainly several hundred species which are lively colored, e. g. bright red or bright green, and some are very colorful indeed. For instance, the so-called “peacock-spider” that shows a wide range of iridescent blue and green color hues, reminiscent of the plumage of peacocks or humming birds.
How do those colors in spiders come about?  Usually they are due to certain pigments deposited in the cuticle of their exo-skeleton or the underlying epidermis cells. Some spiders appear bright green or red or yellow, due to pigment granules. Other spiders contain crystalline deposits of guanine and strongly reflect the incoming light, either pure white or bright silvery. And often coloration is not really caused by pigments but is due to a special light diffraction (interference) in their cuticle. A very fine lamellation in the nanometer range causes a shift of the wavelength of the incoming light and thus a whole spectrum of colors  appears in the outgoing light. We all know this phenomenon from other natural objects such as mother-of-pearl, butterfly wings, or bird feathers. In spiders, such iridescent colors have been known for a long time but only in the last few years were they studied in detail.

Among the jumping spiders are some species where the mouth parts (chelicerae) are strongly iridescent: reddish-purple in the females and blue-green in the males. In that case it is the layering of the cheliceral cuticle that is responsible for the brilliant coloration. In some other species these interference colors reside entirely in hairs or scales of the body. This is for instance the case in those most colorful peacock spiders, where some scales change from blue over turquoise to green, and others from yellow to purple and golden. Under the electron microscope  those hairs and scales exhibit  a meshwork of thin layers that ultimately produces these structural colors. These shiny colors are much more pronounced in males than in females (as in most birds) and it is very likely that they play a crucial role in the visual courtship dances that the male performs in front of a female.

Somewhat surprisingly, such iridescent colors also occur in the large tarantulas. Several species are deep blue  and they are in high esteem (and highly priced!) among tarantula keepers. Some species may have additionally bright yellow hairs on their legs or golden-green hairs on their abdomen. Since most tarantulas are active at night, it is a bit puzzling why they are colorful at all. Their courtship is not visual but tactile, and no predator would be warned by bright colors that can only be seen under day light. So, it may well be that there is no specific purpose for having conspicuous colors, at least not in tarantulas. Perhaps the situation is comparable to colorful organisms living in the dark abyss of the oceans, in which colors only show up under illumination.

Since 14 March is Save-a-Spider-Day, let these colorful spiders brighten your day, or, as the old English saying goes: “If you want to live and thrive, let a spider run alive.

Image Credit: Figures one, two, three, and four by B. Erb. Figures five and six by R. Foelix

Rainer Foelix is recognized as an authority on spiders. He studied Biology in both Germany and Switzerland and earned his PhD in Zoology. His is also the author of Biology of Spiders, now in its third edition.