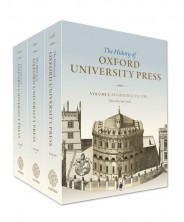 Oxford University has been involved with the printing trade since the 15th century and our Archive holds the records of the University’s printing and publishing activities from the 17th century to date. This week our archivists have generously unearthed some pictures to share with you. From the printing activities at Clarendon Street and the Wolvercote Mill, to our New York office and Melbourne trams, we hope they provide some insight into how our Press has grown and evolved over the years.

To celebrate the publication of the first three volumes of The History of Oxford University Press on Thursday and University Press Week, we’re sharing various materials from our Archive and brief scholarly highlights from the work’s editors and contributors. With access to extensive archives, The History of Oxford University Press is the first complete scholarly history of the Press, detailing its organization, publications, trade, and international development. Watch a silent film, learn about arguments over the first printing press in Oxford and when the Press began, or discover printing in the Sheldonian Theatre in our previous posts.