William and Dorothy Wordsworth: 'All in Each Other'


I was in the Wordsworth Museum in Grasmere on Friday 30th August to see the Wordsworth Trust’s fascinating exhibition, “Dorothy Wordsworth: Wonders of the Everyday”. The sad news of Seamus Heaney’s death could not have reached me in a more appropriate spot, for the Nobel Laureate opened the Jerwood Centre, adjacent to the new museum, in 2005.

Heaney was a ‘Wordsworthian’ in the true sense of the word. His deep affinity with both William and Dorothy Wordsworth found expression in a reverence for ordinary objects, obscure lives. His poetry has repeatedly re-visited and drawn imaginative nourishment from the work this brother and sister produced collaboratively, at the height of their powers, in their beloved Westmorland. He shared their passionate belief that ‘men who do not wear fine clothes can feel deeply’, and took particular pleasure — as they did — in the domestic, the quotidian. Dove Cottage, the Wordsworths’ home for a decade, has proved for Heaney — as for many contemporary poets – a place of pilgrimage and inspiration. He made a BBC documentary on location in Grasmere in 1974. In several contexts he has reflected on things once owned by the Wordsworths, or places familiar to them. Occasionally his poems have even seemed to ‘inhabit’ Dove Cottage itself, as if finding there a kind of second home.

Heaney would undoubtedly have enjoyed the current exhibition at the Wordsworth Museum, which celebrates the life and writings of a woman who ‘knew what home was’ – who ‘put into words moons and clouds and poor people on the roads, plants of fell-side and garden…bread and pies, the silences of evening by the fire, poetry read, and those she loved sharing the comfort’. This is the first exhibition to concentrate on Dorothy Wordsworth in her own right – looking closely at her relationships with female friends, her journals, letters and poems, not just her role as William’s sister. There is an impressive range in the materials selected for display; and a marvellous catalogue-book written by the exhibition’s curator, Pamela Woof, from which I have just quoted.

It wouldn’t do to rush a visit to this exhibition; one needs a whole morning to take everything in – manuscripts, contemporary paintings, books, personal possessions. Short excerpts from Dorothy’s journals are arranged high up on the walls, like ‘found’ imagist poems. There are recordings to be listened to: Pamela has made an excellent selection from the journals, and reads them with beautiful slow distinctness. Very movingly, there is also a free-standing monument at the centre of the room, on which appears a list of unnamed travellers who wandered through Grasmere during the war years — people whose lives Dorothy glimpsed very briefly, and captured in her Grasmere Journal. (In 2013, this Journal was added to the UK’s Memory of the World Register — along with Domesday Book, the Winston Churchill Archives, and other important documents.)

Pamela Woof confesses that she found it hard to keep William out of her exhibition; but she is to be congratulated on getting the balance exactly right. There’s nothing sensational in the way the Wordsworths’ intense relationship is handled here. Visitors are able to see, in Dorothy’s own handwriting, the famous journal entry in which she describes her feelings on the day of William’s marriage to Mary; and they can reach their own conclusions about why some of this description was later crossed out. There is, too, a welcome opportunity to listen to a long section of the 1802 Grasmere Journal in which Dorothy describes how she responded to her brother’s experience of ‘writer’s block’ — reading to him, accompanying him in walks and gardening, selecting the right passage from Shakespeare to get his creative juices flowing.

The exhibition deals very briefly — and tactfully — with Dorothy’s later years, which were blighted by arteriosclerosis and dementia. Severely limited in her access to the natural world, she sought comfort in writing, reading aloud, and copying her verses out in different versions. There was a therapeutic dimension both in creating and ‘performing’ poetry, which by all accounts she found uplifting.

Here is one of the poems Dorothy sent from her sick room in 1839 to a friend, Isabella Fenwick. It gives us some insight into her state of mind as she looked back on a crisis when her life was in danger. She made the poem by joining together (and revising) two poems she had already written. A version of the first three stanzas is already known to scholars as a stand-alone poem addressed to her doctor. The last five stanzas are a shortened and revised version of ‘Floating Island at Hawkshead’.

See what you think of the poem — newly acquired by the Wordsworth Trust — which is published here for the first time. How smoothly does it flow, and do the eight stanzas make a unified whole? 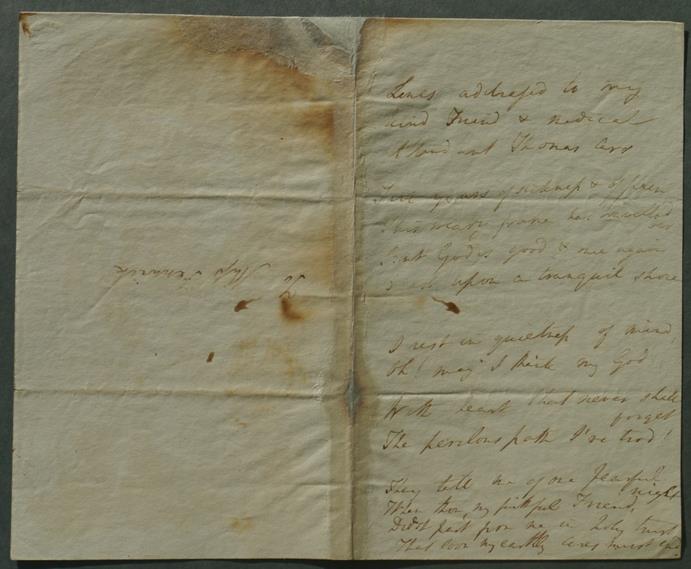 I rest in quietness of mind,
Oh! may I thank my God
With heart that never shall forget
The perilous path I’ve trod!

They tell me of one fearful night
When thou, my faithful Friend,
Didst part from me in holy trust
That soon my earthly cares must end.

Once did I see a slip of earth 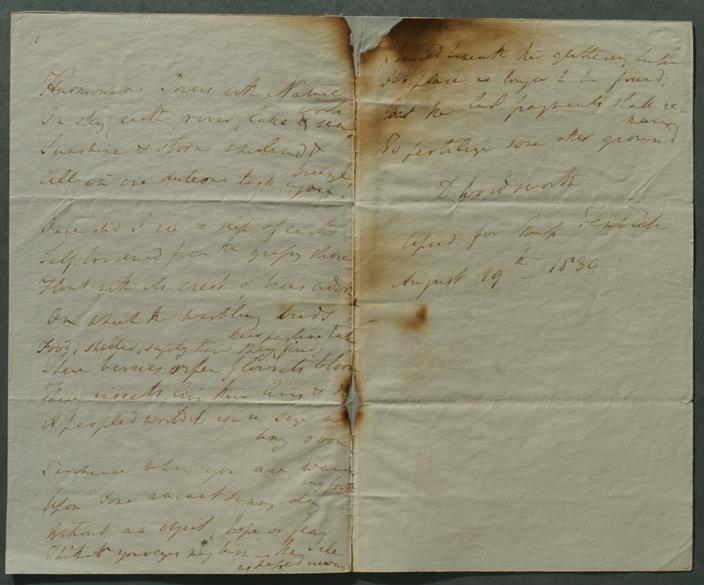 Food, shelter, safety there they find;
There berries ripen flowrets bloom;
There insects live their lives, & die
A peopled world it is – in size a tiny room.

Perchance when you are wandering forth
Upon some vacant sunny day
Without an object, hope, or fear,
Thither your eyes may turn – the Isle is passed away.

Buried beneath the glittering Lake
Its place no longer to be found;
But the lost fragments shall remain
To fertilize some other ground.

Since I first posted this article, there has been much interest in Dorothy Wordsworth’s poem, and especially in that portion of it usually referred to as ‘Floating Island at Hawkshead’ (which was composed between 1828 and 1832).

The Wordsworth Trust have therefore kindly supplied an image of the first surviving version of ‘Floating Island’ (in 7 stanzas) which Dorothy entered in her Commonplace Book. Jeff Cowton and his colleagues have also made a transcription, which enables readers to look at the 2 manuscript versions alongside each other.

The three stanzas addressed by DW to Dr Carr were written in 1836, according to a letter written by Dorothy Wordsworth to Edward Ferguson on 8 Oct 1837. (Susan Levin, in her Longman Cultural edition, dates them a year earlier.)

Until we have a scholarly edition of Dorothy Wordsworth’s Complete Works — something which is long overdue — readers will not be able to give her compositional processes the same kind of detailed attention that her brother’s writing has received through the Cornell Wordsworth edition.

Dorothy’s writing certainly deserves such attention. As we can see in this case, tracking a text through its various versions can give us much food for thought.  I am very grateful to Jeff and his team for their work, which gives a foretaste of what such an edition would be like. 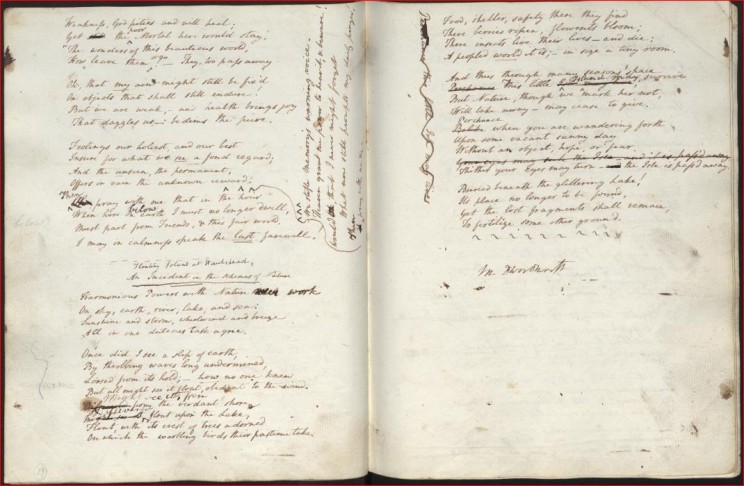 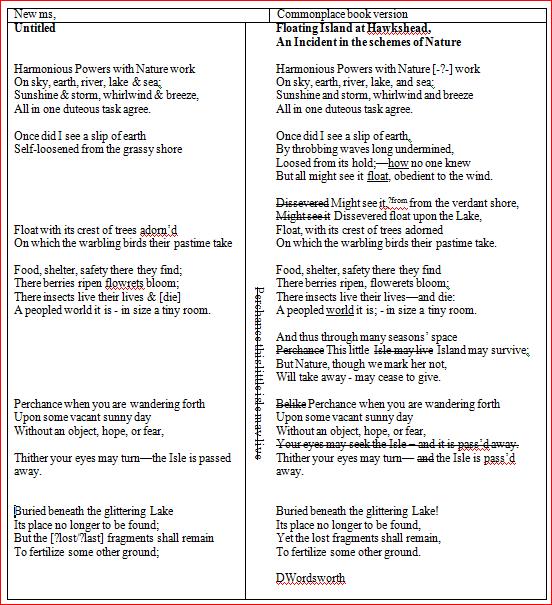 Lucy Newlyn is Professor of English Language and Literature at Oxford University, and a Fellow of St Edmund Hall. She has published widely on English Romantic Literature, and her latest book is William and Dorothy Wordsworth: ‘All in Each Other’.

Why it’s so hard to write a William Wordsworth biography