It is common knowledge that an average page of an English dictionary contains at least twice as many borrowed as native words, even though come, go, see, sit, stand, do, make, man, woman, in, on, and other similar heavy duty words go back to Old English. But anyone who has the knack for reading dictionaries page after page (a rare knack, I must admit) will be surprised to learn that practically all English words beginning with the letters v and z are of foreign descent. This person will notice that in Dutch and German v- and z-words fill up dozens of columns, while in English, the virtues of zeal and the stripes of zebras notwithstanding, such columns are few. Very, vogue, virgin, voucher, vomit—wherever we look, the answer is always the same: from French (mainly), Latin, or Italian, as the case may be.  What is the reason for that? What has happened to the native stock? Before going on, a term has to be introduced. The consonants f, s and th (as in Engl. thigh) and their voiced counterparts (v, z, and th, as in Engl. thy) are called spirants.

Long ago, while answering someone’s question, I briefly touched on the nature of this phenomenon, but, since even I don’t remember the context, it will be safe to assume that no one else does. Therefore, I will proceed. In Old English, the sounds v and z occurred only between vowels. Thus, lufu and risan (Modern Engl. love and rise) were pronounced approximately as luvu and reezan. In present day English, those voiced spirants can still be found in the place in which they stood a thousand years ago. Why then are there so many v– and z- words in Dutch and German and nearly none in English? German is an easy case. Both letters deceive the outsider because they designate the sounds of f and ts respectively. Vater means “father” and in pronunciation begins with f, while z (for instance, in the familiar Zeitgeist “spirit of the time”) is the ts of Engl. tsetse and cats. For the spirant v- German has the letter w-, as in wann “when” and wo “where.” But in Dutch initial v and z designate “real” v and z.

In all the Germanic languages, spirants were swept by a slow-moving but inexorable wave of voicing. We will disregard its remote causes and concentrate on its effects. This sound change perhaps resembles more a stone rolling downhill than a wave. The “stone” was pushed about two millennia ago. In the oldest texts we can still observe f, s, and th (voiceless) alternating under certain conditions with v, z, and th (voiced) and their reflexes (continuations). Later, voicing affected the spirants that escaped the first round, and that is when risan and lufu became “reezan” and “luvu” (at the dawn of their history, they were pronounced with -f- and –s-). Finally, the “stone” dragged down initial consonants. It is not improbable that the odd spelling of German Vater and its likes reflects the occasional old pronunciation with v-. The situation with v-, but initial s– became z– in all German words. See “sea; lake” and so forth are only spelled with an s (consequently, the letter z could be used for another purpose). In Dutch, both f- and s- participated in the process, and, contrary to German, Dutch spelling reflects the change. That is why there are so many v- and z- words in Dutch.

Nor did English get out of the way of the rolling stone, but the change was local and limited to Kent and a few southwestern dialects. Modern English owes a few of its phonetic features to Kent, partly because Chaucer, though a native of London, lived there for a while and retained some “kentisms” in his speech. After these preliminaries, we can return to the V-section of English dictionaries. Although French dominates it, the other sources need not be disregarded. A few insignificant v-words are of Scandinavian origin: Valkyrie (literally “corpse chooser”), Varangian, and Viking should be mentioned. Vodka is, alas, from Russian and is usually explained in an unconvincing way: allegedly, it contains the root of Russian voda “water” and a diminutive suffix. Voda does mean “water,” but the suffix poses problems: in this word, it is not diminutive, for vodka cannot be understood as “little water.” Not unexpectedly, now that we know what happened to initial f in Dutch, a few v-words came to English from that language. However, they are special terms and little known: veer “allow to drift further; pay out a cable, etc.” (distinct from veer “change course,” which is from French) and vang “rope for steadying the gaffs of a sail.” Vang is related to German fangen “to catch.” The English name of such a rope is painter, a noun of doubtful origin; those who do not know it are advised to reread the first chapter of The Wind in the Willows. We can pass by Volapük ~ Volapuk and a few other exotic items embellishing the V-section.

However, there is a short list of native v-words: van “winning basket or shovel; wing (common in Romantic poetry); sail of a windmill,” vane (as in weathervane), vat, and vixen. It is instructive to trace their etymology. Vixen is a counterpart of German Füchsin “she-fox,” minus umlaut and with “southern voicing,” which makes its connection with fox impossible for a modern English-speaker to recognize. Vat also has a German cognate, namely Fass “vessel.” The story of van is less transparent. It is an etymological doublet of fan, so presumably, a southern form, but Old Engl. fann was a borrowing of Latin vannus. The speakers of Old English could not pronounce initial v; hence f-. Old French also had van, a reflex of Latin vannus. The existence of that word might influence the Middle English one. It cannot be decided whether the interplay of native dialectal voicing and the French analog played a role in the history of Engl. van.

In Middle English, final vowels were lost. Lufu became love (two syllables: lo–ve) and still later a monosyllable. The final spirant was not devoiced, and the English learned to pronounce v not only between vowels. Once that happened, French words like very (from Middle Engl. verray) no longer caused them any trouble. It is rather unlikely that Londoners would have been able to articulate initial v without forms like lov “love” (noun).

After such an explanation the history of Engl. z- comes like an anticlimax. Zenith, zymosis, and the rest are so unmistakably foreign. Still one runs into zinc (from German), zounds (a contraction of His wounds), zip (probably onomatopoeic), and zigzag (Germanic). In the dialects in which initial f became v, s- also yielded z-. Edgar (King Lear), while feigning madness, says zir for sir. But no word of this type entered the Standard. This is one of the reasons the Z-part of an English dictionary looks so sparse.

Does the stone of sound change ever stop rolling downhill? It probably does, assuming that it can eventually strike bottom and hit all its potential victims. 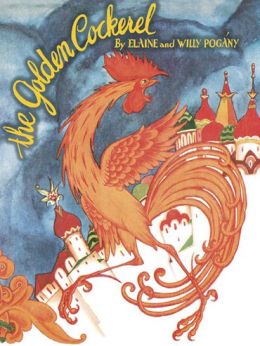 Much later than the events described above voicing affected the beginning of short, mainly unstressed, words, such as the, this, that, there, then, and thy (all of which once had the th– of thorn and thick) and the end of is, was, as, and has, the latter being a relatively modern replacement of hath, and of. The future will show whether there is still something left for the voicing of spirants to do. Historical phonetics keeps us in permanent suspense.

The picture gracing this post is an illustration to Pushkin’s fairy tale The Golden Cockerel (and there is an opera by Rimsky-Korsakov, his last one, known in the West as Le coq d’or, on this plot). Now that in our prudish parlance cock has yielded to rooster, weather cock has become weathervane, but it was indeed a cock, the same we still see on many houses, even though not made of pure gold. However, in the story of initial v-, vane did its work well.

Image credit: Book cover by Willy Pogany for The Golden Cockerel: From the Original Russian Fairy Tale of Alexander Pushkin by Elaine Pogany via Barnes & Noble.