Two hundred and one years ago this month, along the Ratcliffe Highway in the East End of London, seven people from two separate households were brutally murdered. News of the atrocities quickly spread throughout the country, generating levels of terror and moral hysteria that were not seen again until three-quarters of a century later when Jack the Ripper launched his savage career in a neighbouring East End district. Britain had no professional police force until 1829, and so the task of apprehending the killer (or killers) fell to an ill-coordinated group of magistrates, watchmen, and churchwardens who were woefully unprepared for the pressures of a major murder investigation, and who struggled to reassure a terrified populace that justice would be served. “We in the country here are thinking and talking of nothing but the dreadful murders,” wrote Robert Southey in December 1811, safe in his Keswick home three hundred miles from London, but still badly unnerved. “I…never had so mingled a feeling of horror, and indignation, and astonishment, with a sense of insecurity too.” The killing began near midnight on Saturday, 7 December 1811, when an assassin passed quietly through the unlocked front door of Timothy Marr’s lace and pelisse shop. Once inside he bolted the door behind him and then ruthlessly dispatched all four inhabitants. When the alarm was raised and the door unlocked, eye-witnesses saw Marr’s wife Celia sprawled lifelessly. Marr himself was dead behind the store counter. His apprentice James Gowen was stretched out in the back near a door that led to a staircase. Downstairs in the kitchen, three-month-old Timothy Marr junior was found battered and dead. All four victims had their throats slashed. Twelve days later — again around midnight, again in the same East London area — it all happened a second time, on this occasion in the household of John Williamson, a publican. Williamson himself was found dead in the cellar. He had apparently been thrown down the stairs. His throat was cut. His wife Elizabeth and maid Anna Bridget Harrington were discovered on the main floor, their skulls bludgeoned and their throats slit. 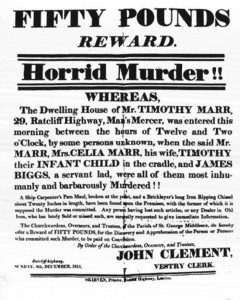 Authorities quickly rounded up and interviewed dozens of people. One of them, John Williams, an Irish seaman in his late twenties, was questioned before the Shadwell magistrates on Christmas Eve, and then sent to Coldbath Fields prison to await further investigation. Suspicion grew as circumstantial evidence mounted against Williams, but before the magistrates could re-examine him, he hanged himself in his prison cell. The circumstances of his death were widely interpreted as a confession of guilt — much to the relief of some of the magistrates — and on New Year’s Eve Williams’s body was publicly exhibited in a procession through the Ratcliffe Highway before being driven to the nearest cross-roads, where it was forced into a narrow hole and a stake driven through the heart. Several officials, however, immediately raised doubts about Williams’s guilt, and in The Maul and the Pear Tree: The Ratcliffe Highway Murders (1971), P. D. James and T. A. Critchley conclude that Williams could not have acted alone, if he was involved at all, and that he may even have been murdered in his prison cell by those who were responsible, an eighth and final victim in the appalling tragedy.

To Thomas De Quincey, the finer points of the investigation mattered little. What impressed him was the audacity, brutality, and inexplicability of the crimes, and in his writings he returns over and over again to the Ratcliffe Highway, always attributing the murders solely to Williams, and exalting, ignoring, or altering details in order to exploit his deep and diverse response to the crimes. In his finest piece of literary criticism, “On the Knocking at the Gate in Macbeth” (1823), De Quincey introduces the satiric aesthetic that enables him to see Williams’s performance “on the stage of Ratcliffe Highway” as “making the connoisseur in murder very fastidious in his taste, and dissatisfied with any thing that has been since done in that line.” Yet De Quincey also peers uneasily into the mind of the killer in order to reflect on the psychology of violence. In Macbeth, he asserts, Shakespeare throws “the interest on the murderer,” where “there must be raging some great storm of passion — jealousy, ambition, vengeance, hatred — which will create a hell within him; and into this hell we are to look.”

Williams is also at the heart of De Quincey’s three essays “On Murder Considered as One of the Fine Arts.” In the first, published in 1827, De Quincey grazes the brink between horror and comedy as he argues with energetically ironic aplomb that “everything in this world has two handles. Murder, for instance, may be laid hold of by its moral handle… and that, I confess, is its weak side; or it may also be treated aesthetically…that is, in relation to good taste.” Twelve years later, in the second essay, he employs the same satiric topsy-turviness, but in this instance he inverts morality rather than suspending it. “For if once a man indulges himself in murder,” he observes coolly, “very soon he comes to think little of robbing; and from robbing he comes next to drinking and Sabbath-breaking, and from that to incivility and procrastination.” Finally, in the 1854 “Postscript,” De Quincey changes direction, returning fitfully to the black humour of the first two essays, but concentrating instead on impassioned representations of vulnerability and panic, and in particular on the horror of an unknown assailant descending on an urban household which is surrounded by unsuspecting neighbours. In its coherence, intensity, and detail, the “Postscript” is De Quincey’s most lurid investigation of violence.

The three “On Murder” essays had a remarkable impact on the rise of nineteenth-century decadence, as well as on crime, terror, and detective fiction. De Quincey is “the first and most powerful of the decadents,” declared G. K. Chesterton in 1913, and “any one still smarting from the pinpricks” of Oscar Wilde or James Whistler “will find most of what they said said better in Murder as One of the Fine Arts.” More recently, the British television drama Whitechapel (2012) has exploited De Quincey’s fascination with the Ratcliffe Highway killings, as have authors including Iain Sinclair, Philip Kerr, and Lloyd Shepherd. “May I quote Thomas De Quincey?” asks the murderer politely in Peter Ackroyd’s Dan Leno and the Limehouse Golem (1994). “In the pages of his essay ‘On Murder Considered as One of the Fine Arts’ I first learned of the Ratcliffe Highway deaths, and ever since that time his work has been a source of perpetual delight and astonishment to me.” Most compellingly, in his forthcoming thriller Murder as a Fine Art, David Morrell makes De Quincey the prime suspect in a series of copy-cat murders that terrify London in 1854. Morrell’s two detectives Ryan and Becker discover that De Quincey’s “Postscript” has just been published, and that in it “the Opium-Eater described Williams’s two killing sprees for fifty, astoundingly blood-filled pages — murders that by 1854 had occurred forty-three years earlier and yet were presented with a vividness that gave the impression the killings had happened the previous night.” De Quincey’s response to Williams ranged from gruesomely vivid reportage to brilliantly satiric high jinks and penetrating literary and aesthetic criticism. In his hands, violent crime became a subject which could be detached from social circumstances and then ironized, examined, and avidly enjoyed by generations of murder mystery connoisseurs and armchair detectives who enjoy the intellectual challenge, rapt exploration, and satiric safety of murder as a fine art.

Robert Morrison is Queen’s National Scholar at Queen’s University in Kingston, Ontario. He has edited our edition of Thomas De Quincey’s essays On Murder, and his edition of De Quincey’s Confessions of an English Opium-Eater and Other Writings is forthcoming with Oxford World’s Classics next year. Morrison is the author of The English Opium-Eater: A Biography of Thomas De Quincey, which was a finalist for the James Black Memorial Prize in 2010. His edition of Jane Austen’s Persuasion was published by Harvard University Press in 2011. His co-edited collection of essays, Romanticism and Blackwood’s Magazine: “An Unprecedented Phenomenon” is forthcoming with Palgrave. Read his previous blog post on John William Polidori and The Vampyre.

The imaginative power and feminism of Harriet Prescott Spofford