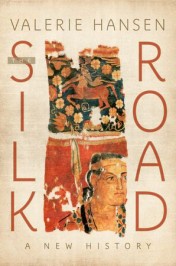 The “Silk Road” was a stretch of shifting, unmarked paths across massive expanses of deserts and mountains — not a real road at any point or time. Archaeologists have found few ancient Silk Road bridges, gates, or paving stones like those along Rome’s Appian Way. In fact, the main defining features of the Silk Road are not man-made at all. They are best seen from the air — converging valleys, desert oases, and river chasms among towering mountain peaks. Although a physical road doesn’t exist, it is still a subject ripe for examination and study.

What kind of sources are there for the study of the Silk Road?

What we know about the Silk Road isn’t mainly from ancient books or stone inscriptions, but from trash. The dry climate of the Taklamakan Desert has preserved different types of documents written on wood, paper, and cloth. Many of them survive because paper had a high value and was not thrown out. Craftsmen also used recycled paper to make paper shoes, statues, and other paper-maché objects to accompany the dead on their journey to the afterlife. The original documents have to be pieced together before anyone can make sense of them. Written in multiple languages and found in many different places, these documents contain an enormous amount of information about the Silk Road trade.

What goods were traded on the Silk Road?

Silk wasn’t the only good traded on these routes. Metals, spices, medicines, glass, leather goods, and paper all moved across Eurasia. Paper became the primary writing material for all of Eurasia, and surely had a far greater impact on human history than silk, which was used primarily for garments. Invented during the second century BCE, paper moved out of China, first into the Islamic world in the eighth century, and reached Europe via its Islamic portals in Sicily and Spain. People north of the Alps learned to make their own paper only in the late fourteenth century.

When was the term Silk Road coined?

The term “Silk Road” didn’t exist at the time of the Silk Road trade and there was no single route across Central Asia. The peoples living along different trade routes never referred to any particular route as the “Silk Road.” They referred to the different sections of the road as the “Road to Samarkand” (or whatever the next major city was). They did call the different routes around the Taklamakan either the “northern” or “southern” route.

In 1877, Baron Ferdinand von Richthofen (1833-1905), a prominent geographer and the uncle of the World War I flying ace, produced a five-volume map of China. One map showed a single line connecting Europe and China, which he called the “Silk Road,” and the name stuck.

Which countries did the Silk Road connect?

The Silk Road connected China with the Iranian world, specifically the city of Samarkand (in today’s Uzbekistan) and the surrounding communities. This was the homeland of the Sogdians, who spoke an Iranian language called Sogdian, and many observed the teachings of the ancient Iranian teacher Zarathustra (ca. 1000 B.C.E., called Zoroaster in Greek), who taught that truth-telling was the paramount virtue. Some of the most exciting finds in the past decade have been the tombs of Sogdian leaders found in the main cities of interior China. The most common long-distance travelers, in fact, were the Sogdians who lived in and around modern-day Samarkand in today’s Uzbekistan.

Did the Silk Road connect China and Rome?

No. At least there was no direct traffic during the years of the Roman Empire that we know of. Romans didn’t exchange their gold coins directly for Chinese silk. The earliest Roman gold coins found in China — so far only 48 gold coins (many are fakes) have been discovered after a century of intense investigations — are Byzantine solidus coins dated to the sixth century, several centuries after the capital shifted from Rome to Constantinople (modern Istanbul).

Valerie Hansen is Professor of History at Yale University. Her books include The Silk Road: A New History, The Open Empire: A History of China to 1600, Negotiating Daily Life in Traditional China: How Ordinary People Used Contracts, 600-1400, Changing Gods in Medieval China, 1127-1276, and, with Kenneth R. Curtis, Voyages in World History. To find out more about Valerie Hansen, visit her website.